Bram Bogart, 1921–2012, was dedicated to exploring the materiality of paint. Like Burri and Fontana, he challenged and blurred traditional notions of painting and sculpture, building three dimensional paintings comprised of mostly natural ingredients including various oils, glue, pigment, powdered chalk, and water. This investigation into the sculptural possibilities of paint led him to use increasingly thick layers, to create nuanced textural surface, exploring balance and disorder, tension and calm, two- and three-dimensionality, colour and structure.

Bogart refused to be pigeon holed into any school or grouping yet he was an artists’ artist, exchanging works with his contemporaries Schoonhoven and Fontana. Where Fontana broke the plane by slashing and gauging, Bogart, more than any other pushed outwards towards the viewer,using paint as a sculptural medium. As a young man his heroes were Rembrandt, Permeke and Van Gogh, and later on inspiration came from Mondrian and Van Der Leck. This lineage of lowland painters is very much evident in Bogart’s work.

In concurrent solo shows at Frieze Masters and in the gallery in Dering Street, Vigo will exhibit rare works created in the fifties, sixties and seventies alongside some incredibly strong late paintings in order to illustrate his continuity and progression in pushing the medium to its limits. Over the last few years we have worked with the artist’s family, dealers and curators, seeking out the best works from private collections by this undervalued and historically important artist.

Two rare paintings will be included from 1959;‘Printemps Neerlandais’ and ‘Agglomeration’. The former is proximate in date and style to ‘Absolution’ thoughtfully exhibited opposite the entrance to the Rothko Room at Tate Modern from 2014-16. According to the artist’s son the use of expensive red pigment in ‘Agglomeration’ in contrast to the cheaper browns, blacks and white pigments came about after coming into contact in 1958 with his wife to be Leni, who had glorious red locks and would lend him red paint which he used frugally.

The jewel in the crown is arguably ‘Lousy Jane’, perhaps his most accomplished painting from 1960, the last year he was able to use stretched canvas before the paint became too heavy requiring thereafter the use of reinforced wooden supports. It marks a turning point and to many it is his masterpiece. At the time he was in Paris and Rome and spent much of his free time in the Café Rosati, with other international artists including De Kooning. For me, although very different, ‘Lousy Jane’ has empathy with De Kooning’s ‘Door to the River’ of the same year, created by a similar palate of pink, brown, yellow and grey brushstrokes. In a fantasy curation they could hang in conversation either end of a room.

From mid 1961 on, Bogart starts to paint on the floor and the works begin to look like his hero and fellow countryman Van Gogh’s brush strokes, but enlarged a thousand fold. This golden period lasts until about 1965 producing some of his most outstanding contributions to the history of painting.

The sublime ‘Call Girl’ 1964 shows us Bogart’s full strength in one seductive painting. Also of particular note is the ‘Blokkenlucht’, 1964, which literally translates as ‘Sky of Blocks’. In it he employs the colour palette that he often returned to of yellow and blue, referencing Van Gogh and the blue sky and yellow of the cornfields in Arles. This painting has an amazing 16 colours and undulating, voluptuous terrain that retains both tension and intrigue. 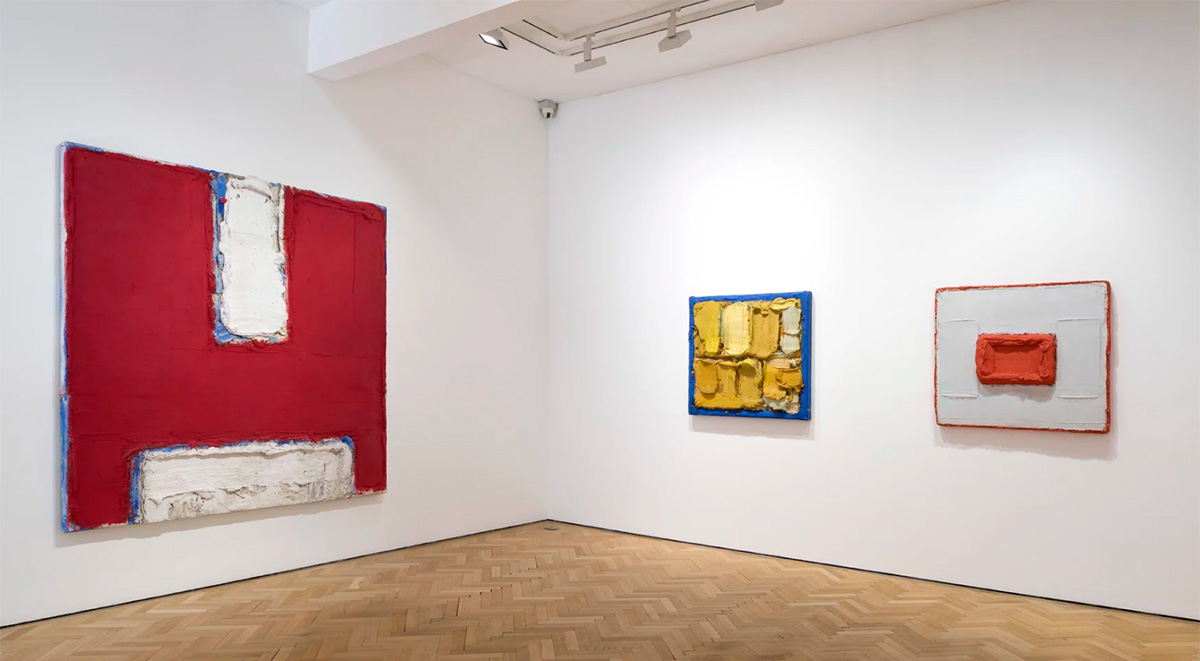 ‘Zonzucht’, (Sunshine) January 1965, is another major painting imprinted on my mind by a fabulous photograph of his works leaning against the outside of his Manor house in Ohain. Tracking down this painting was a coup as this is one of the larger more important works from this period. At this time Bogart is developing quickly and you see the difference between this and the much thicker, raw works from 62-64. The surface has become flatter and the feel more quietly meditative and subtle. Fontana visited Bogart to see these works at the time and wrote. ‘A few months ago I reviewed the new works of Bogart in the studio-house of Ohain, what a show of beauty and structural power! An enchanted castle, bravo Bogart.”

Also from the same year is ‘Rood in Wit’ – ‘Red in White’, a potent and almost electric painting combining the strategies from paintings like ‘Call Girl’ and ‘Zonzucht’ to great effect in a smaller work.

When first confronted with a Bogart, the effect is immediate. In 1965 Fontana wrote ‘For many years now I’ve met the painter Bogart in Paris, and yet I can not forget the impression that I had when watching his paintings the first time when I saw them in his studio’. Previously, in 1959 after exhibiting with Bogart, Niki de Saint Phalle was so blown away by the pregnancy of the white surface of his painting ‘Reine des Tauraux’ that she was inspired to create her famous shotgun paintings where she violently pierced thick plaster, releasing coloured paint buried within. I personally will never forget seeing them for the first time aged about twelve and immediately rushing off to make my own versions with pigment and polyfiller. Bogart makes you want to paint. 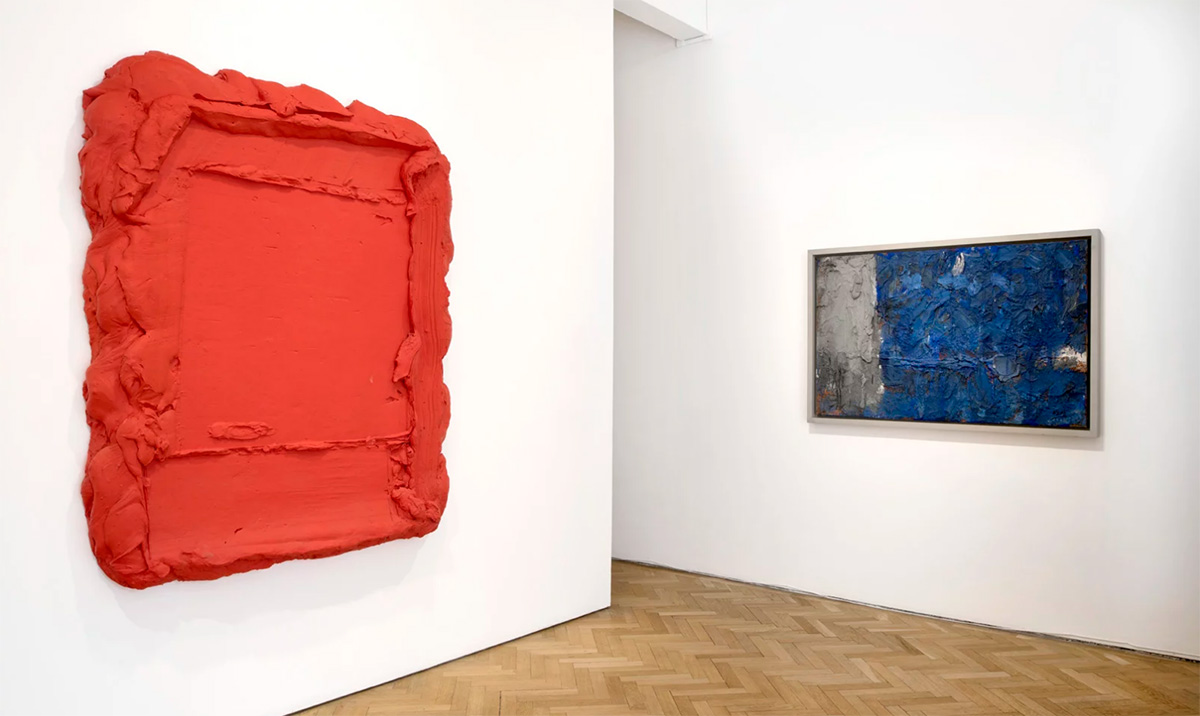 These paintings sometimes feel like they were created by an aesthetically astute giant with a suitably large range of utensils for flattening, extruding and brushing cake icing. New observers seem to search for comparisons like this, trying to make sense of the volumus matter, the like of which they may not have encountered. For the most part Bogarts are made of solid home made paint, the colour within and on the surface, referred to by Wim Beeren, Director of Museum Boijmans as a ‘concretion of colour’, a sort of structural polychromy, rendering the painting not merely abstract colour/s but abstract coloured structure.

To understand the progression of Bogart’s paintings one can think of them in terms of a linear, logical almost inevitable progression of the exploration of his medium. Throughout his career, he continues to test himself, making some of his finest works in his last decade.

Belgium’s representative at the 1971 Venice Biennale and subject of dozens of museum shows internationally, Bogart’s work can be found in many major collections. Following the acquisition of four works in 2014 by Tate Modern, the British public is slowly starting to become aware of this important Dutch artist. In future years I hope and believe that many more people will regard him as an extremely important historical figure in the canon of abstract painting who stuck throughout to his vision, exploring the sculptural possibilities of paint.

The exhibition will run until the 11 November.

NEW COLORS TO SAUDI ARABIA
THE STAN LEE STORY BY TASCHEN
ANTIQUITY IS THE ORIGIN OF OUR ERA: LEO CAILLARD at MACM
Orpheus and Eurydice: the Greek myth as the guide toward an understanding of the self.
IN CONVERSATION WITH ANNA HU
Mike Thompson - An illustrating marvel