Strong, masculine, connoisseur, perfectionist; no surprise his brand has grown into an interplanetary success.

He built an empire without ever having studied finance, but always admiring art, which led him to study at the Parson School of Design in New York and become part of the scene gravitating around Andy Warhol. After studying fashion for many years, he took a degree in architecture. But the turnaround came when he moved to Perry Ellis as Design Director.

Armed with instinct, ethical dedication, taste and the capacity to listen, within a decade Tom Ford had become one of fashion’s greatest successes. In 2008 he made his debut as film producer and director with “A Single Man”, presented in competition at the 66th Venice International Film Festival. It was very well received, to the point of being awarded the “Queer Lion” for the best film with LGBT themes, while British actor Colin Firth, the film’s star, was awarded the Volpi Cup for Best Actor. Last September, again in Venice, he presented his second feature film, “Nocturnal Animals”, which won the Grand Jury Prize.  In his dual role as stylist and director, Tom Ford is a synonym for ‘classy-sexy’, and making a success out of everything he touches, whether it is perfumes or film. 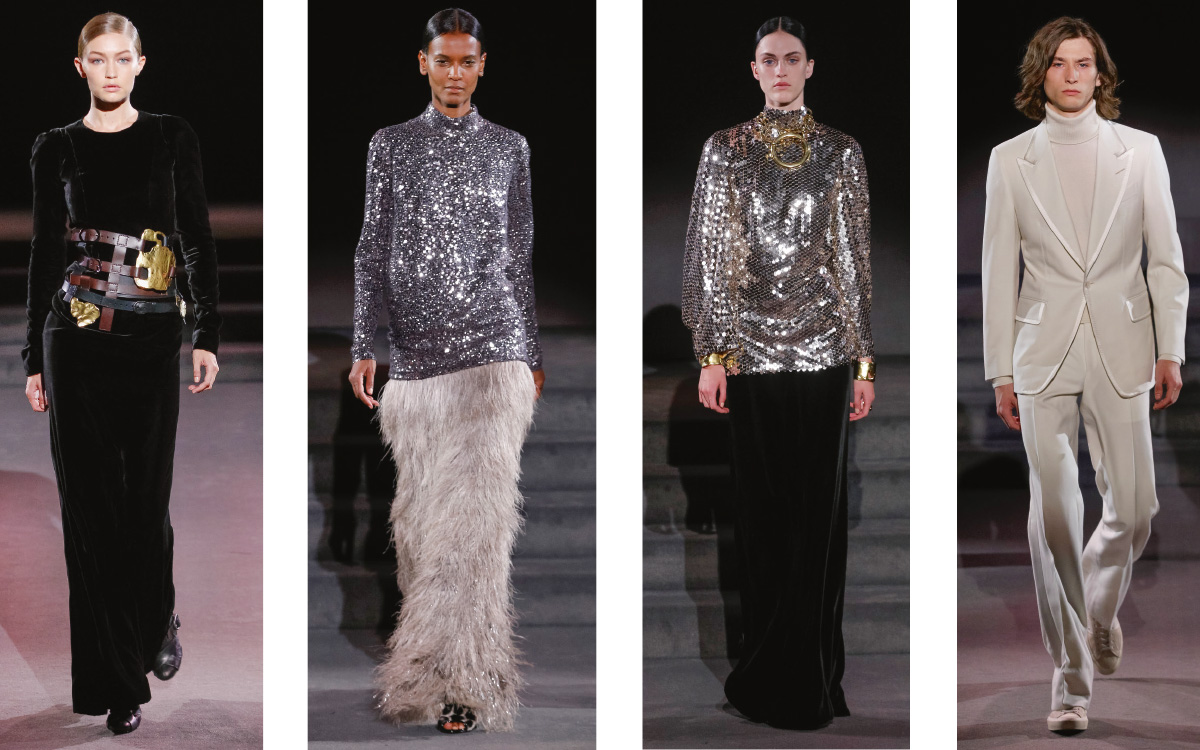 F.1.M. : Where does the inspiration for your collections come from?-  A dream, a melody, a feeling?

T.F. : From everything; art, a piece of fabric, a journey, but also from my consummate self-criticism when it comes to knowing what to wear and what not to wear as well. For this winter, the departure point was the beauty hidden in the most unexpected places. I thought a lot about how time always leaves its mark on places and things; a tarnish, a wrinkle, an imperfection that makes the whole thing more interesting.

F.1.M. : Which object or accessory that you have created are you most proud of?

T.F. : It’s impossible for me to choose just one, as you know; the Tom Ford brand is renowned for evocative luxury and fascination. That means there are always new, distinctive items evolving. For women this season, we wanted to go a step beyond, creating colour-block furs, colour -turned speckles, and gathered leather tops painted in original, woody shades; waist-points highlighted by fetish belts, and artwork coordinated with both sexy dresses and tweedy suits. The evening shines in all-over metal sequins, feathers in motion, and sophisticated velvets, all in the name of evocative luxury with just the right eccentricity.

F.1.M. : What should men and women invest in these days?

T.F. : Bags and shoes are still great investments, because you can use them every day. A chic accessory can always transform any look.

F.1.M. : Can elegance and comfort coexist?

T.F. : Absolutely! Take the Tom Ford Private Eyewear Collection, a special edition of sunglasses and prescription glasses, with eleven models I designed for myself.

Eleven isn’t just any old number, it’s precisely the number of years we’ve been a success in the eyewear sector. The five sunglasses’ models all have photo chromatic lenses that automatically darken and lighten to adapt to the ambient light conditions. I always protect my eyes, because you never know what you’re going to see next.

F.1.M. : Is creativity the product of discipline or chaos?

T.F. : For me it’s the fruit of curiosity and always being ready to explore new ideas.

F.1.M. : At this point in your career, do you consider yourself more designer or director? How do you experience these two aspects?

T.F. : In effect, covering both these roles is a little unusual, and a constant challenge, but for me, the way I am, it makes a lot of sense. Fashion and film are similar disciplines; both aim to create possible and perfect worlds spectators can identify with. They’re the arts of vision and seduction. Alternating between one role and the other gives me energy, and what’s more, gives me a more complete view of the problem.

F.1.M. : What’s your opinion of the new paradigm of masculine beauty, and men who spend more on cosmetics than women? Indeed, your own grooming line offers three different oils for beards, concealers and anti-fatigue eye treatments…

T.F. : It isn’t the first time that men have invested time, resources and energy in their grooming. Caring for your appearance isn’t an exclusively female prerogative, and I think this kind of attention is coming back. Naturally, my line is developed to make the Tom Ford man look far more fascinating than other men.

F.1.M. : In 2006 you presented your first fragrance, Black Orchid, which paved the way for the future success of Tom Ford Beauty. Now you’re celebrating the tenth anniversary with a limited edition collection, the Orchid Collection, made up of eight beauty products inspired by the iconic fragrance. Another limited edition – are they so popular?

T.F. : In our case they’re a tribute to a true story, the story of a luxurious, refined fragrance. Now, as a tribute to that success I’m proposing the Black Orchid Perfume Lalique Edition, a limited edition of the fragrance presented in a pure black crystal bottle, beautifully designed in ‘twenties style’ by Lalique, exclusively for Tom Ford Beauty. They’re objects that exalt lifestyle as contemporary taste, which should be increasingly widespread.  They’re projects born from care, and for people who understand perfectly what excellence and quality truly are.

T.F. : These days real luxury is time and silence.