Riva motorboats are symbolic of luxury and elegance, style and performance. Though inspired on the American runabout, even today they have a unique style, capable of exalting the beauty of the materials made the more precious by scintillating chromework, and earning the admiration of all, whether in port or at sea.

“Getting back into port with the boat, looking at millions of stars and feeling like a millionaire but without a penny…”. Sounds like the voice of Carlo Riva, visionary, pioneer, engineer always one step ahead, whose genius gave life to some of the world’s most beautiful vessels, each of which a timeless icon.

This is the story that begins in a storm. Iseo Lake, 1842: Pietro Riva, young shipwright from Laglio accomplishes a miracle, fixing many of the local fishermen’s boats damaged by a violent storm.

That was how the Sarnico shipyard came to be. It’s a story that continues with all the classic Italian pioneering spirit well into the post-war years when Carlo Riva found what it took to decline the myth of speed and motor racing in a nautical key, and started building luxury motorboats in mahogany, which immediately became the object of desire of royalty, cinema stars and sports champions.

In November 1962 his fervent imagination created a legend: its name, Aquarama (no “c” please!), his true masterpiece. A motorboat that marked the design of an era, with is sinuous, sensual form, hull in polished mahogany, the aft sundeck with mattresses on the engine hatches (General Motors or Chrysler, in marine guise) and the top.

Its name is a play on the word Cinerama, the curved screen format cinema very reminiscent of the shape of the boat’s windscreen. The prototype was named Lipicar no.1, owned by engineer Carlo himself, acronym of his three daughters’ initials, and for its baptism at sea it had a young test-driver, Giovanni Agnelli.

It cost 10 million 800 thousand Lira and was the largest, with its 8.02 metre length, of an exceptional fleet. The Ariston, with its Alfa engines; the Corsarino, the Sebino, the Tritone, the Florida. Then the Junior and Rudy. But the most famous by far remains the Aquarama: launched with the slogan ”Sun, sea and joie de vivre”, it became the stage of the Dolce Vita, and the icon of the Côte d’Azur in the fabulous ‘Sixties.

Those years perhaps would have been a little less fabulous without those motorboats darting around the Mediterranean, meeting up in all the most exclusive places.

They were piloted by the Kings of Saudi Arabia and Morocco, Hussein of Jordan and the Grimaldi princes, the Tritone was Rainer of Monaco’s favourite, as well as the Shah of Persia’s and billionaires like the Aga Khan, Howard Hughes, Onassis and Kashandoggi. Then actors and actresses: from Sophia Loren to Anita Ekberg, who wanted one with zebra upholstery, and Brigitte Bardot who bought three just to spite Roger Vadim. The list goes on. Gunter Sachs, Richard Burton and Sean Connery, Jean Paul Belmondo and Peter Sellers, and later George Clooney. Even the princliest of princes, Antonio De Curtis, aka Totò, couldn’t resist its fascination.

All proudly immortalised at the helm of one of those superbly crafted vessels that combine precious woods and cutting-edge technology.

The last Aquarama Special, number 784, was built in 1966. But Carlo Riva had already sold the shipyard – established in 1842 by builder Pietro Riva, who passed it on to his son Ernesto, then Serafino and finally Carlo in the fifties with partner Gino Gervasoni – to the American Whittaker company. Carlo sold in 1969, and left the shipyard in 1971. But with neither heart nor mind. 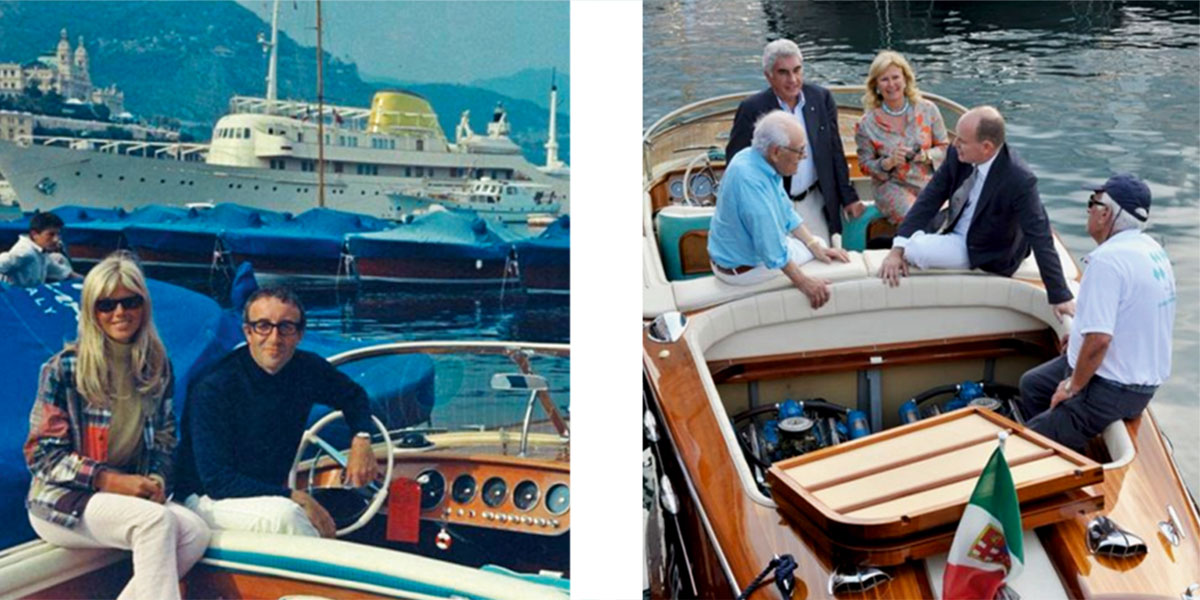 “I used to go and ask his advice for every single project. Every time I lift the veil on a new model, my thoughts go out to him” affirms a somewhat emotional Alberto Galassi, CEO of the Ferretti Group that has owned the Riva brand since 2000. Galassi talks of the engineer as friend, maestro, nautical genius. Lucid and always forward-thinking, right to the end. “He was the first to introduce glass fibre in Italy, to obtain a State concession to build a tourist port (the Carlo Riva in Rapallo), to understand the importance of customer service (the debut of the boat service network in Gardone Riviera, then the one in Montecarlo, for which a tunnel was excavated using dynamite under the Rocca for dry berthing). And the first to have the courage to build luxury boats in an Italy still rebuilding itself after the war. A true pioneer ”.

A balanced synthesis of elegance and innovation, capable of marking new milestones in the history of international nautical design. The spirit of the young boat builder Pietro Riva has been handed down unaltered. Riva still builds boats like no-one else can, to once again see the stars shimmering in the placid waters of the Principality. 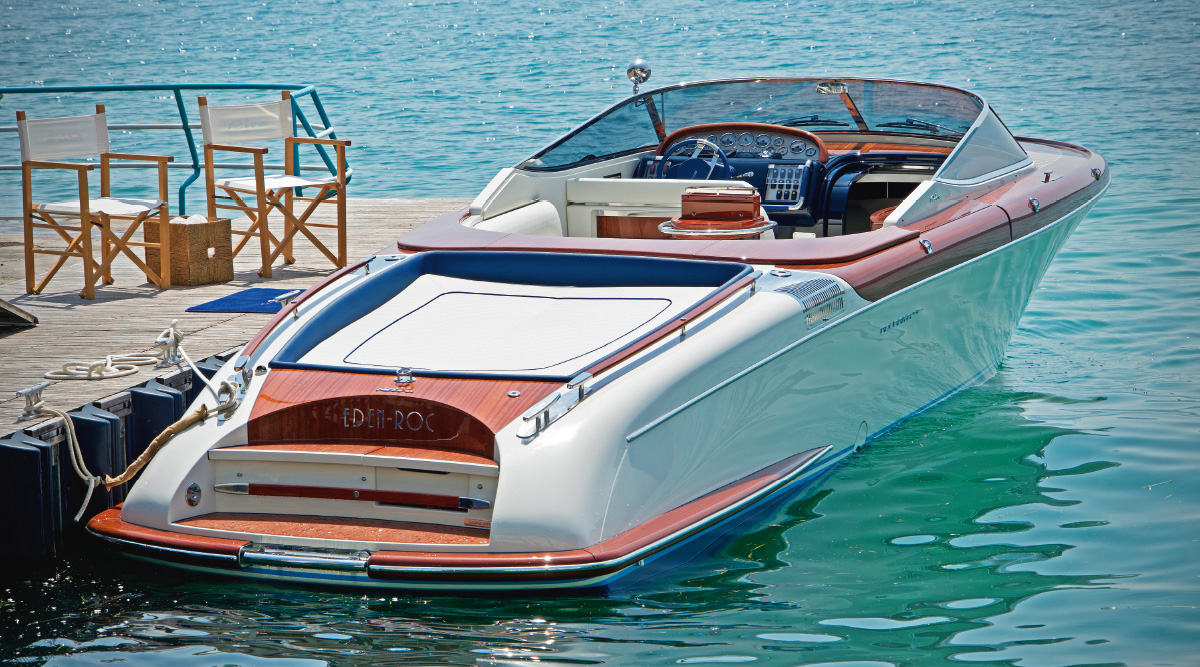 The timeless class of Riva motorboats just keeps on seducing the clients of the world’s most prestigious hotels. Absolute icon of the “Bella Vita”, in this case à la française, the Eden-Roc offers a splendid tribute to a legendary destination, inspiration of so many artists, writers and cinema stars and other celebrities, many of whom have already enjoyed the Aquariva’s spiritual predecessor, the legendary Aquarama.

The Riva Aquariva Super, designed for the hotel Cap-Eden-Roc at the historic Riva boatyard on Lake Iseo, will be moored at the hotel for exclusive use by its guests, offering exceptional cruises toward some the most beautiful sites in the region. By day they can visit Saint-Tropez, Cannes and the Lerins islands, for unforgettable moments with family or friends, or even just use the boat for a romantic aperitif around sunset.

“The Cap-Eden-Roc Hotel has a long-standing association with Riva Yachts that goes back to when the now legendary Aquarama was launched. Today we open a new chapter in this story with our own Aquariva Super Eden-Roc. Every detail of this absolutely stunning boat is infused with the style of our own luxurious hotel, and I am very proud to be able to offer this very special service to our guests here”.