In the moment of his final goodbye, Force One pays tribute to one of the most sophisticated fashion designer of the golden age. What follows is the interview we made in 2017.

A brand steeped in history and tradition, a world made not simply of apparel, but of lifestyle, celebrated for the prestige and sophistication that have always characterised his precious collections, each of them veritable works of art.

Nino Cerruti is a forerunner. The man of the future, as his son Julian likes to define him, who loves change, who already in the Fifties understood the importance of giving his clients a world, not just clothing.

The legend tells that in 1950 Mr Nino, not yet twenty years of age and with the dream of becoming a journalist, took the reins of the family business, renewing it and reinterpreting all the fabrics, and then went on to establish Hitman and become a pioneer in the field of haute couture with the prét-a-porter concept, producing luxury apparel, manufactured to the highest tailoring standards of exclusive fashion but on an industrial scale.

From Biella to the Paris boutique in Place de la Madeleine designed by architect Vico Magistretti, international recognition, the adoration declared by the jet set, Hollywood actors and actresses and even the crowned heads of Europe for his creations.

The step was so short that in just a few years Cerruti became the “must have”, courted by some of the world’s best directors and designers, amongst whom Erica Phillips, Gloria Gresham and Marilyn Vance.

It’s simply the best. The most perfect trim, the most beautiful fabrics and the most elegant style in the world. – Bernie Pollack –

He designed some truly memorable dresses for films: Kathleen Turner’s provocative neckline in “The Jewel of the Nile” was unforgettable, just as Sharon Stone’s seductive little lace number in “Silver”, Richard Gere’s impeccable suit in “Pretty Woman” and Michael Douglas as the symbol of yuppie elegance in “The War of the Roses”; not to mention the suit that transforms the diseased body of Tom Hanks in “Philadelphia”, or the reference to quality when Christian Bale as the psychopathic financier in “American Psycho” turns to the lady in a Chinese laundry and says “You can’t bleach a Cerruti, Out of the question”, or even the multifaceted style of Jack Nicholson in the black comedy “The witches of Eastwick”.

Even now, after selling his share in Ceruti 1881 to dedicate himself exclusively to running the original mill, Lanificio Fratelli Cerruti dal 1881, as Chairman of the board sided by his son Julian, he still manages a company capable of producing and communicating elegance, style and quality, handing down a heritage where past and future merge in a harmonic coexistence.

F.1M.: What was the most significant lesson you learned from your father?

N.C. : My father adored his work, so I think the most significant thing he passed on to me was his pure passion for what he’d created. In 1915, after receiving a solid technical education in Germany and despite the particularly difficult period of history, he managed to extend the mill founded in 1881, making a series of improvements to the technology and methods that put it on the same level as the English competition.

F.1M.: How has the concept of elegance changed from the Sixties to the present day?

N.C. : All too often people associate the Cerruti brand with the ‘Sixties. In realty the concept of elegance is very much linked with the fact of being elegant: not vulgar… it’s a concept that’s highly personal, individual and free.

F.1M.:  How do you remain so consistent over time?

N.C. : Creative talent is a fundamental aspect of our trade, and it’s the factor that determines modernity.

F.1M.: The fabrics are the “signature” of Lanificio F.lli Cerruti dal 1881. How difficult is it to constantly renew the image without betraying the heritage? And what are the strengths of a textiles company like this?

N.C. : First and foremost the fabrics, the colours that characterise the brand … and then there’s Italianness, lifestyle, casual elegance.

We give the brand great freedom of interpretation, because we serve an international and highly diversified clientele.

F.1M.:  As the great innovator you are, you immediately grasped the need to create a “Cerruti – world”, a tradition that continues today in the fabrics and numerous collaborations. In the Web era, how do you innovate?

N.C. : I think innovation is fundamental. Our past and recent collaborations and projects are ways to have fun and extend the brand to other categories of product, while maintaining a very much Cerruti image. As for the world of the Internet, I believe we’re living through a real revolution, which obviously involves the world of luxury and fashion. It’s certainly something that’s going to completely change our way of life, as well as our perception of how we act and react ……. Imagine what it’s going to be like in another 10 years … who knows! In the meantime we’re organising and working with schools and projects like the one to support the Woolmark Prize or the creation of the Tabloid Newsletter we’ve just presented at Milano Unica.

The new must always be imperceptible. – Nino Cerruti –

F.1M.: In “creating a world” were the fabrics “the” distinguishing element of the style?

N.C. : I have a very personal attachment to the fabrics … perhaps because they encapsulate, in a little square of cloth, the very essence of the brand’s artistic dimension. Likewise I believe buyers and designers always come to us because no self-respecting men’s collection could possibility be without at least some F.lli Cerruti dal 1881 fabrics in them. Beauty is something that never goes out of fashion!

F.1.M.: To date your name has appeared in the credits of more than a hundred films, Your connection with the film world goes back to the ‘Sixties. How did it all start?

N.C. : I love the cinema, and its actors, too: they’re never normal people, and often very fragile, but passionate and fascinating. With all my other interests and above all passion for art, my connection to their world feels like a love at first sight.

Passion for film is symptomatic of my openness to new possibilities, and sort of confirms that I can still read our contemporary society through the characters in a film.

I think one of my major strengths as a costume designer really lies in the skill of the people working with me: a team of specialists and experts in the sector, capable of choosing exactly the right fabric for the situation, of conceiving, designing and making costumes at the intense rhythm demanded by film production, not to mention their ability to please some of the world’s greatest actors.

Once I had to open the factory over the weekend because we had to make and entire wardrobe in black for Jack Nicholson in “The Crossing Guard”, and they needed everything ready in just a week.

Jack was playing a jeweller in Los Angeles who’d been waiting for years for the man that killed his daughter in an accident to walk into his shop, so he always dressed in black as a sign of mourning.

When Nino Cerruti dresses you for a film, you can count on him, once updated on your character, for suggestions, details, precise and accurate advice that will help you as an actor to perceive your character more minutely, and present him in the quickest and most direct manner to the future audience. – Philippe Noiret –

F.1M.:  What has this economic crisis taught fashion? Has the culture and history behind a brand become indispensable in this new economic scenario?

N.C. : Economic crises come and go and I think this teaches us that luxury with a capital “L” always prevails, but it demands quality, practise, creativity and research, and tradition certainly does add an element of interest.

F.1M.:  How do you cultivate the culture of a brand, and how do you communicate it?

N.C. : The culture of a brand is immensely valuable, but it has to be enriched, nurtured and kept alive every day through the energy people put into it with their work.

But it takes time and a great deal of passion to truly absorb the culture of a brand; that’s why we put so much emphasis on training, using all the publications about the brand as well as the archives, obviously, which is so rich and extensive. It’s the brand’s DNA really. It’s also interesting to read what our fans say about us on the social networks, to get an objective view of how people see us.

F.1M.:  What’s the real significance of heritage, and what does living with mean?

N.C. : It’s the point of distinction a company achieves through its history.

Cerruti has a very important heritage in terms of lifestyle, and my son and I are having fun redefining it for our customers today. Men and women in search of comfort and fabrics with advanced technical properties (anti-drop and anti-stain).

I’ve always said it. I detest those fashion photos where everyone looks so miserable, I think they’re ridiculous. I think the point of our trade is to make people feel good and want to show it. – Nino Cerruti –

F.1M.: The new collections have abandoned some colours and three-dimensional designs ranging up to “almost solid” . Has Cerruti man changed?

N.C. : I’m afraid people all too often tend to read out brand as an emblem of the past: true, that’s part of our universe but it’s not everything we are. Our colour range is very rich and so it’s hardly surprising that after much research our chief designer Gigi Palandri, decided on a different approach with sophisticated, refined and elegant designs, dedicated to the man who makes tradition his distinctive mark.  All this with natural fibres like wool, mohair, silk and linen, working on yarns with unique “coarse and fine” blends and twists that give the collections an exclusive “imprinting” that’s modern and wearable as well, typical of the Lanificio F.LLI Cerruti dal 1881 DNA.

F.1M.:  How do you define style and elegance?

N.C. : Style is dressing with character, elegance is what makes it natural.

N.C. : Time, a fleeting treasure. There’s never enough … That’s why it’s important to live every moment to the full. After all, fashion is interwoven inseparably with speed, the fleeting moment. The only one, probably.

There can be no great fashion without great fabrics. In the design of our product we give all of our care and attention to every single phase of the process, combining taste and technology. – Nino Cerruti – 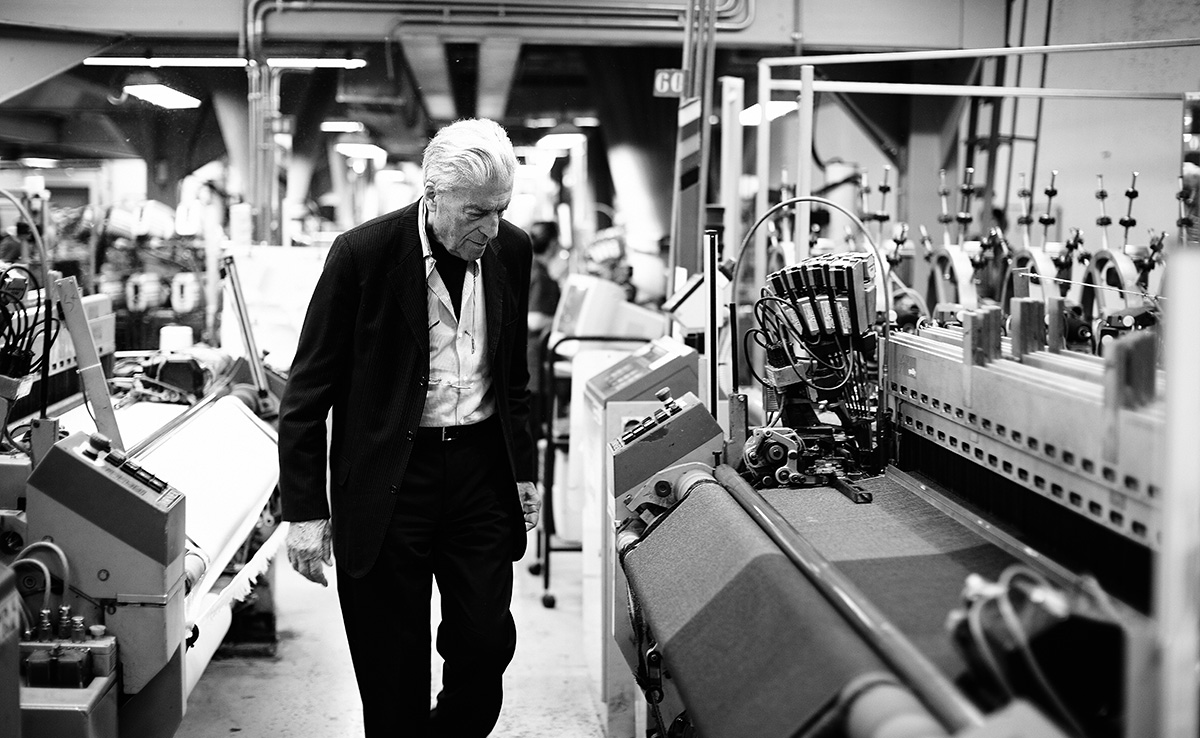