One of a kind for its unique combination of architecture, art and beautiful environment, Villa Arconati in a certain sense symbolizes our contemporary interest in the journals of travelers past. Embraced by nature in an immense park, the Villa is an artistic jewel that effectively defines the grand architectures of the Renaissance, the pomp of the seventeenth century, the romanticism of the nineteenth century, and continues to do so even now.

One of the things modern travelers tend to do is to choose the places and landscapes described in old travel guides, and then visit them under the incomparable guidance they give. This is probably why we’re seeing a renewed interest in this sort of travel literature.Reading through the journals of travelers past, whether distant or recent, gives us a unique insight into some of the most evocative, historically rich routes of the European continent, opening them to discovery through the perspectives offered by other literary and visual cultures.

The narratives and images the guides conjure cast an estranging light on ancient routes obscured by the shadows of the past, almost as if travelled for the very first time.
These places, both real and imaginary at the same time, often coincide with the very spaces traveled by the cultured traveler of whom Aldous Huxley spoke when he stated that a journey must be a movement in time, as well as in space, “an excursion through the history of thought “. From these unprecedented recompositions of some of the most celebrated routes of the past comes an invitation to discover places of extraordinary evocative power, itineraries to be experienced with inventiveness and discretion, almost as if they proposed an itinerant reinterpretation of the past.

One of these is Villa Arconati-FAR, located just 10 km from the center of Milan in a place where time seems to have stopped. Set in the green heart of the Groane Park, it has miraculously kept its identity intact, without being absorbed into the surrounding urban fabric.Among the most illustrious examples of the majestic Villas of delight of the Milanese aristocracy, Villa Arconati has maintained its timeless charm, enriched by four centuries of history.

But the villa would not be what it is today without Count Galeazzo Arconati, who bought the Castellazzo country estate in 1610 and began its transformation. It was he who created the Italian garden with classical statues and water features, designed through his own studies of Leonardo’s Codex Atlanticus. Arconati bought the villa at a time when no one had yet understood the its unique value of the codex, which was donated by him to the Ambrosiana Library in 1637. 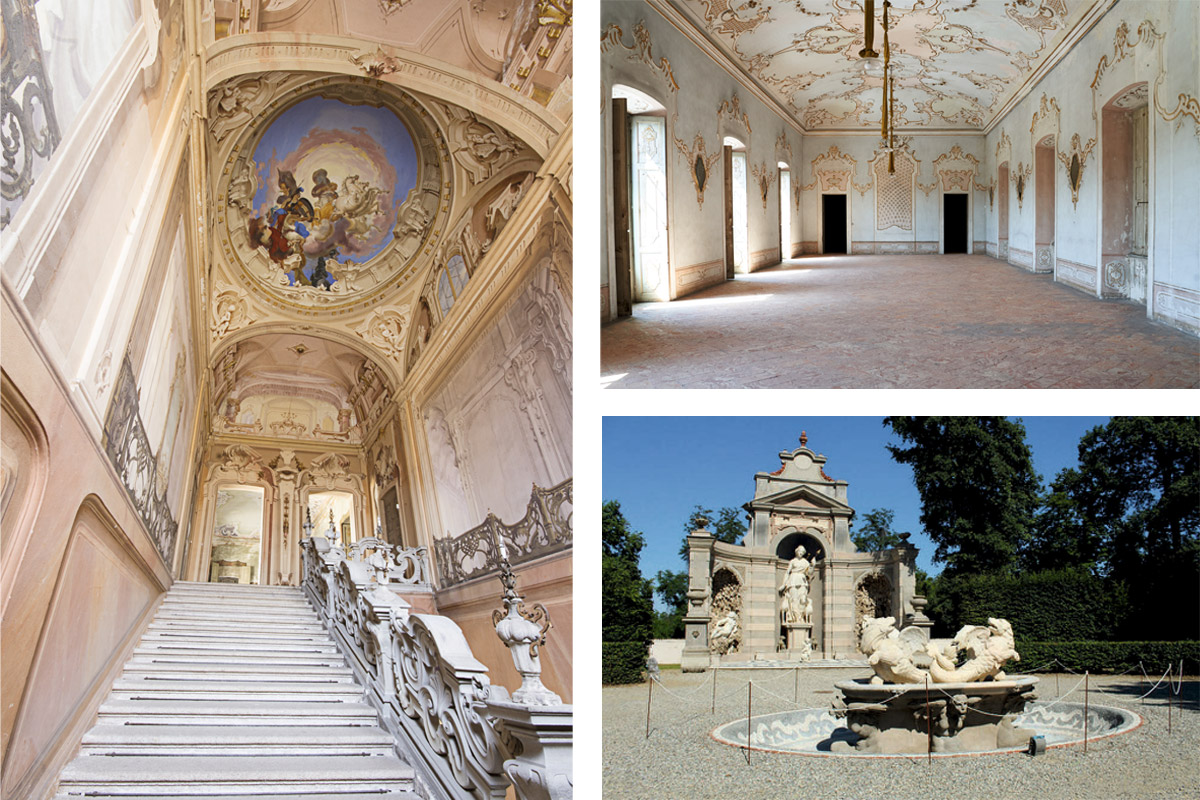 Four generations of Arconati demonstrated their greatness through the “delights” of their villa, which over the centuries was enriched with wonders for all the senses, to the point that it became a favorite destination for artists and writers at the court of Giuseppe Antonio Arconati in the eighteenth century. Carlo Goldoni, a guest in the villa in the summer of 1747, dedicated his “Putta Onorata” to him, and for him the Galliari Brothers, scenographers of the Scala, created the spectacular fresco in the reception room on the main floor.

However, we shouldn’t be led to believe the golden age of the villa ended with the death of the last of the Arconatis in 1772. In the first half of the nineteenth century the merit for restoring the entire complex, respecting the taste and style that had made this place unique over the course of two centuries, deservedly goes to the Marquis Antonio Busca,. Without his intervention, perhaps today there would be nothing left to recall the glorious past of the Arconati. Through the twentieth century, which saw hard times for the population devastated by the two world wars, three generations of Donne took care of the Castellazzo and kept it alive with the means at their disposal: they installed electricity and heating, and used the villa was their refuge in times when Milan was not safe.

After the death of Donna Beatrice Crivelli, the last resident of the villa in the 1990s, the villa experienced its darkest moment: the artistic heritage was sold and the gardens abandoned.
Now the Augusto Rancilio Foundation has the ambitious project to restore Villa Arconati-FAR to its former glory, to give the entire complex a new lease of life in a modern, sustainable and future-oriented approach, and carry forward the memory and the project of those who over four centuries of history believed in the unique nature of this immortal place.
Surely a worthy journey in pursuit of art, offering something new and different, enabling a tourist to regain possession, albeit for the brief space and time of a short itinerary, of the lost role of “cultured traveler”.