Energy, beauty, creativity. And the tranquil power of a man who’s managed to involve some of the world’s most important watchmakers in a struggle of hope and love. Luc Pettavino, founder of the Monegasque Association against Muscular Dystrophy, explains his outlook while presenting the eighth edition of Only Watch.

On Saturday, 9 November, Christie’s Geneva will be hosting the new edition of Only Watch, the auction of unique watches manufactured specifically for this occasion, the proceeds of which go 100% to the Monegasque Association against Muscular Dystrophy to fund medical research.

F.1.M. : Only Watch is now in its eighth year and the number of brands involved has constantly increased. Now there are 52 supporting this biennial charity auction, and you’ve raised over 35 million Euros. Were you expecting a result like that when you started out? Did you have any figure in mind?

L.P. : Absolutely not! All I knew was that I was prepared to put positive energy and creativity into making something beautiful happen.

The way I saw, and still see, this incredible adventure is like climbing a mountain. Basically one step at the time, but I often glance at the summit, just to be sure I’m moving in the right direction. It’s a process of focusing on the details while always bearing the big picture in mind. I never imagine any figure, so I can only be positively surprised.

All I know is that I give the greatest possible consistency to everything, meaning I try to do what I say and say what I do, so people can trust this project on the long term and understand every step of it.

F.1.M. : At the start, how hard was it to convince manufacturers to create unique pieces just for the Association? In the end, that’s a big commitment, both financially and in terms of effort.

L.P. : Well, there are lots of ways of making a piece unique: you can change the colour of watch, change the metal of the case, work on the complication or have an artist paint the dial. Of course, the hardest way is to create a unique complication specially for Only Watch, but I must say, this is happening more and more often as we go on. Manufacturers put enormous efforts into creating specific watches for this auction. They know the more work they put in, the more interest they’ll get, and that means better results for both the brand and the charity. Going back to your original question: it wasn’t that hard really. I was lucky to have Blancpain as sponsor for the Monaco Yacht Show. And when I had the idea of Only Watch in 2004 I went to see the late Nicolas Hayek telling him about it and asking if he would take part. He validated the support of the Swatch Group and introduced me to the CEOs of the premium brands of the group. I also knew Yves Piaget from Monaco and some others… Then, I simply Googled ‘watch auction’ and the first name that popped up was Antiquorum.

I called the owner, Osvaldo Patrizzi, and he helped me set up a base where I could talk about reality and not just hopes. At that point all we had to do was start calling everyone…

F.1.M. : The Only watch formula is simple: no brand gets a priority position and 100% of the income goes to the charity. Is this the secret for assuring total commitment from all involved? Transparency brings energy, so to say?

L.P. : When I create a project, I try to make the pitch as simple as possible. For Only Watch it was “to create beauty to do good”: to create a unique version of an existing watch, or a unique watch, and every partner I involve can see there’s no money involved, contracts and such, even for manufacturing, and clearly see the charity itself has no costs: they understand what we’re doing, whether interested or not, but at least they don’t have to deal with questions like “what are the costs?”, “what are the returns?”, “how do they operate?” and such like. So we make it very simple: every brand gets a double page in the catalogue and the same size logo. It’s all very egalitarian and ethical. Somehow, all the people and all those brands accepted to do all this because they understood it was real, and efficient to support medical research. At the time our son Paul was still with us – he still is in spirit – but the situation back then made it easy for them to understand and support us. You know what? The beauty of Only Watch is that it’s a project that manages to stay fresh. The fact that it’s every two years gives people a proper break so when they see you again presenting the new edition they had time to reflect and are ready to start again in the right spirit.

F.1.M. : Every year would be too often. It would take too much energy.

L.P. : All the brands have their own charity projects, so it’d be too much of a demand on them. That doesn’t mean I don’t keep in touch, paying visits, but in the “off” years more for keeping up relations, explaining, debriefing and beginning to think about what we could may be do for the next edition. But all nice and easy, no stress. For now it’s a winning formula.

F.1.M. : Previously in your career you turned the Monaco Yacht Show into the most important nautical event of the year, now Only Watch is another success, proving you’re certainly a great “conductor”. But how important are the “musicians”?

L.P. : I often describe myself as a Specialist… in generalities… which means I understand the gist of what everyone’s doing but I’m no specialist in anything. The musicians are much more than important, they’re essential. They’re the ones who perform the symphony at the highest level. I just make sure they’re in good shape. I make sure the energy around them is high, that they’re greeted, welcomed and appreciated, spreading good energy so they come and they say, let’s do this all together! The conductor is humbly making sure that everyone’s happy and the music of the best quality. And when I say musicians I mean not just the watch brands but the media, the partners, the people hosting the collections, the collectors, the team helping me…

L.P. : (Laughs) I think watches are beautiful! I’m no collector but I do own a few. But over the years the Only Watch family has grown and I feel like a father to this big family… so it’s like I don’t feel comfortable choosing any of the children over another. In the end I love them all equally, and since I can’t wear twenty watches at once, I don’t wear any of them!

From September 25 to November 9, collectors from the entire planet will have the opportunity to attend the collection previews, during the Onlywatch World Tour. The tour will start at the Monaco Yacht Show and will continue in other 9 cities in Europe, USA and Asia.

Monaco: 25 to 28 September at the Monaco Yacht Show

Dubai: 1 to 3 October at Christie’s in association with Seddiqi

Paris: 7 to 8 October at Christie’s

Singapore: 25 to 26 October at Malmaison by the Hour Glass

100% of funds collected, given research on Duchenne muscular distrophy 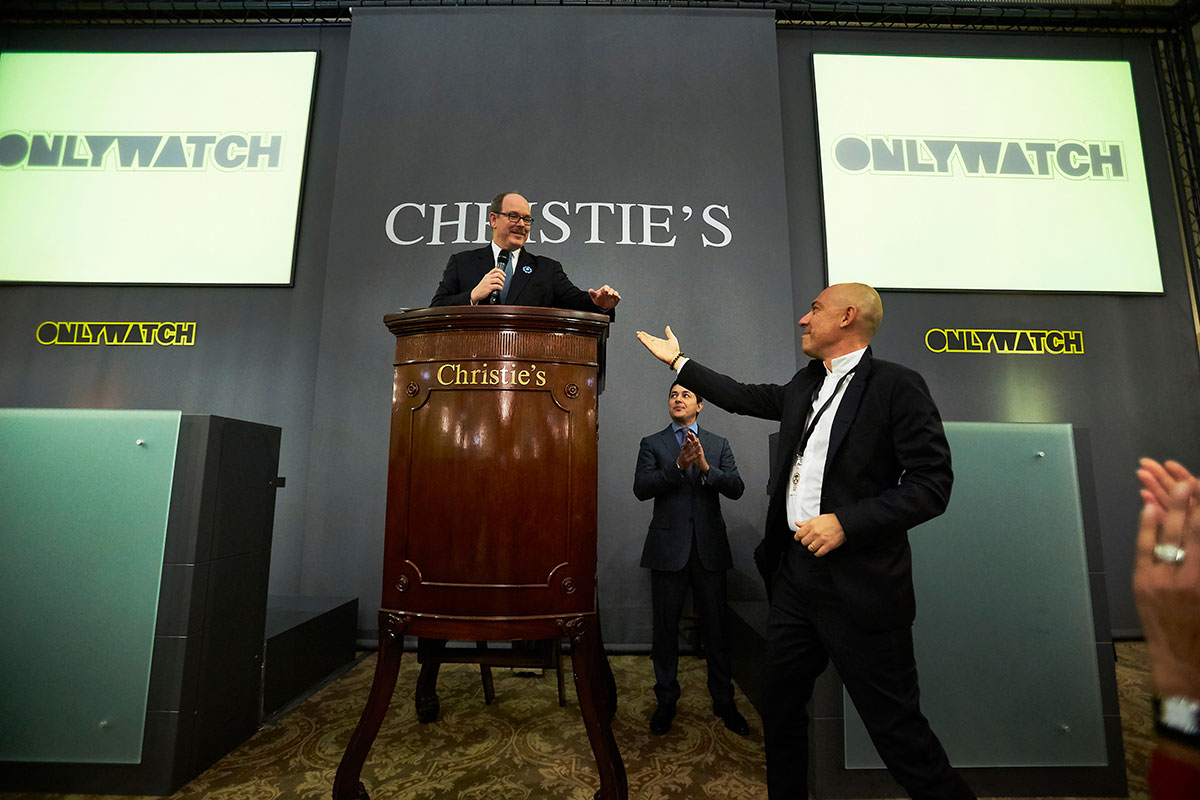 WATCH THIS SPACE!
RAFAEL NADAL - PLAYING FOR THE FUTURE
JEAN SHAFIROFF
FAREWELL NINO CERRUTI - INSIDE THE WARDROBE OF A LEGEND
RM 71-01 AUTOMATIC TOURBILLON - RICHARD MILLE'S FEMININE TALISMAN
THIERRY BOUTSEN - FROM F1 TO THE BOARD ROOM