No success story exists without a man’s vision, without courage, without bravado. An adventure like that of the most dreamed car in the world would not have been possible without these elements. But above all it would not have been possible without the passion, the fatigue, the sweat, the dirt of the oil and the petrol, the cries of enthusiasm and pain of a unique human being, and all those superhumans who wrote the legend with him.

I don’t know what matters more, success or persistence. I have never been a designer nor a calculating individual, but an agitator of men;  sometimes i went too far, but if i hadn’t,  ferrari would not be what it is.

Fasten your seat-belts for the ride of all rides! Superlatives lose their luster, their power, and frankly, their meaning in describing TASCHEN’s latest triumph in the art of book publishing. Il Fascino Ferrari is a veritable Bible of everything you wanted to know, everything you thought you knew, and the never-ending ocean of what you could never have imagined about the vision and world of a little boy, born in the nineteenth century, named Enzo Anselmo Ferrari.

A fierce Enzo Ferrari at the helm of a CMN, a Milanese brand that soon disappeared, with the mechanic Nino Berretta. This image was taken at Targa Florio in 1919; Ferrari came in 9th place. He never raced on a car bearing his name. © Ferrari S.p.A., Zincografia modenese

Just by it’s mere volume, you can understand why any reference to Ferrari signifies a double F; one F is not enough to encapsulate the sheer drive, passion, resourcefulness, and fidelity to the spirit of Italy, exemplified in the life of the courageous man, his team and the Ferrari car legacy. Through the pages of Il Fascino Ferrari, you will be plunged into a world as fast and exciting as the enigmatic car itself. The reader is cocooned in the plains of the picturesque countryside of Emilia-Romagna on the trail of the boy born 120 years ago, and who today, is the most influential name in car history. Fascinating is the story of the visionary who was never satisfied with the projects presented to him; his throbbing desire was to trouble the waters of the calm reality that he saw.

As a tribute to seven decades of glorious history, this unparalleled volume gives you exclusive content from the Ferrari Archives, as well as private collectors the world over, and astounds you with hundreds of unpublished photographs, drawings, sketches and original documents that reveal the fabulous story of the birth and legend of the iconic Italian Scuderia Ferrari, founded in 1947, a monument to Italy’s driving force. 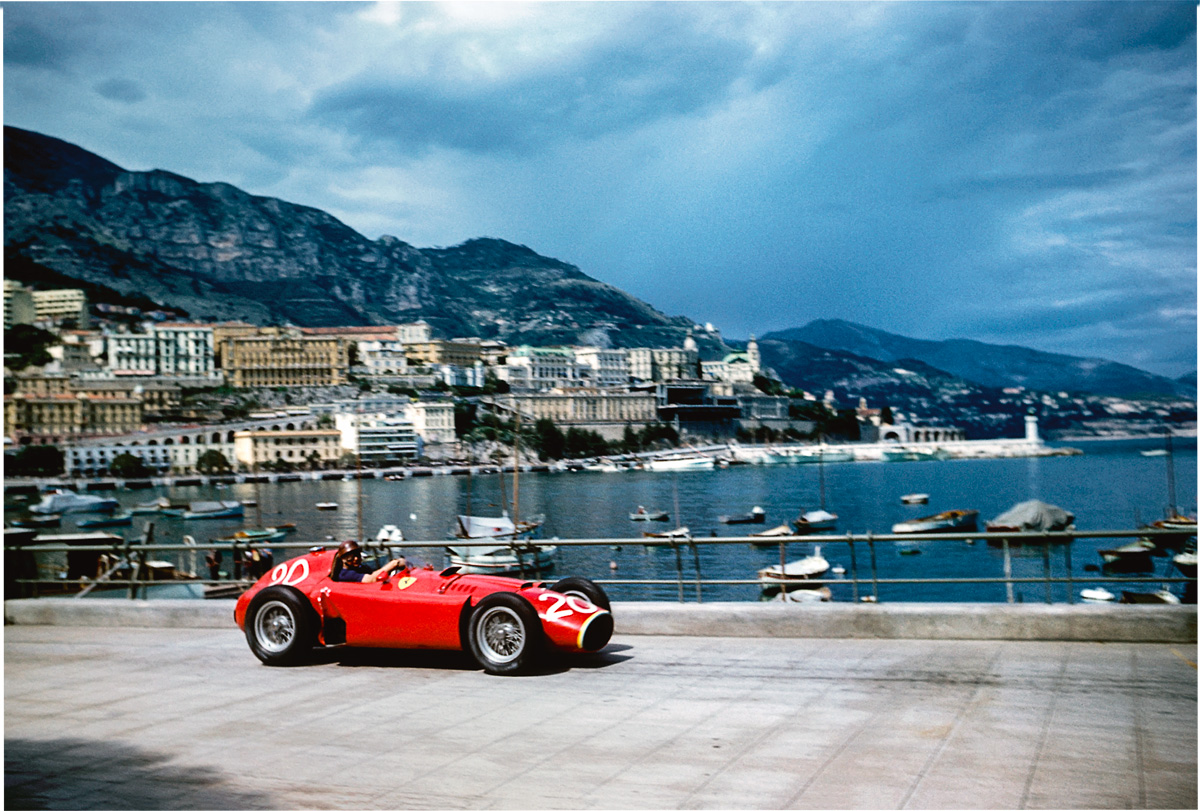 Juan Manuel Fangio, in a T-shirt and bare arms, drives the Ferrari D50 in Monaco in 1956. Those were different times, when safety was not considered a priority. © BROOOOM.COM Archiv Stuttgart

A project conceived in close collaboration with Ferrari, it features a complete appendix of all of Ferrari’s victories since 1947. This is definitely a collector’s delight, however if you have the misfortune of not owning one of the eclectic icons, TASCHEN now gives you the golden opportunity to own them all.

Collaborating on this mythical volume are some of the world’s greatest giants in the history of cars and design. The texts are written by Italian writer and journalist, Pino Allievi, who has chronicled the world of sports cars as a commentator for both Formula 1 and Rai. A recipient of the Dino Ferrari journalistic award, Allievi has authored many books on automobile history and its many heroes, many of whom he knew personally. 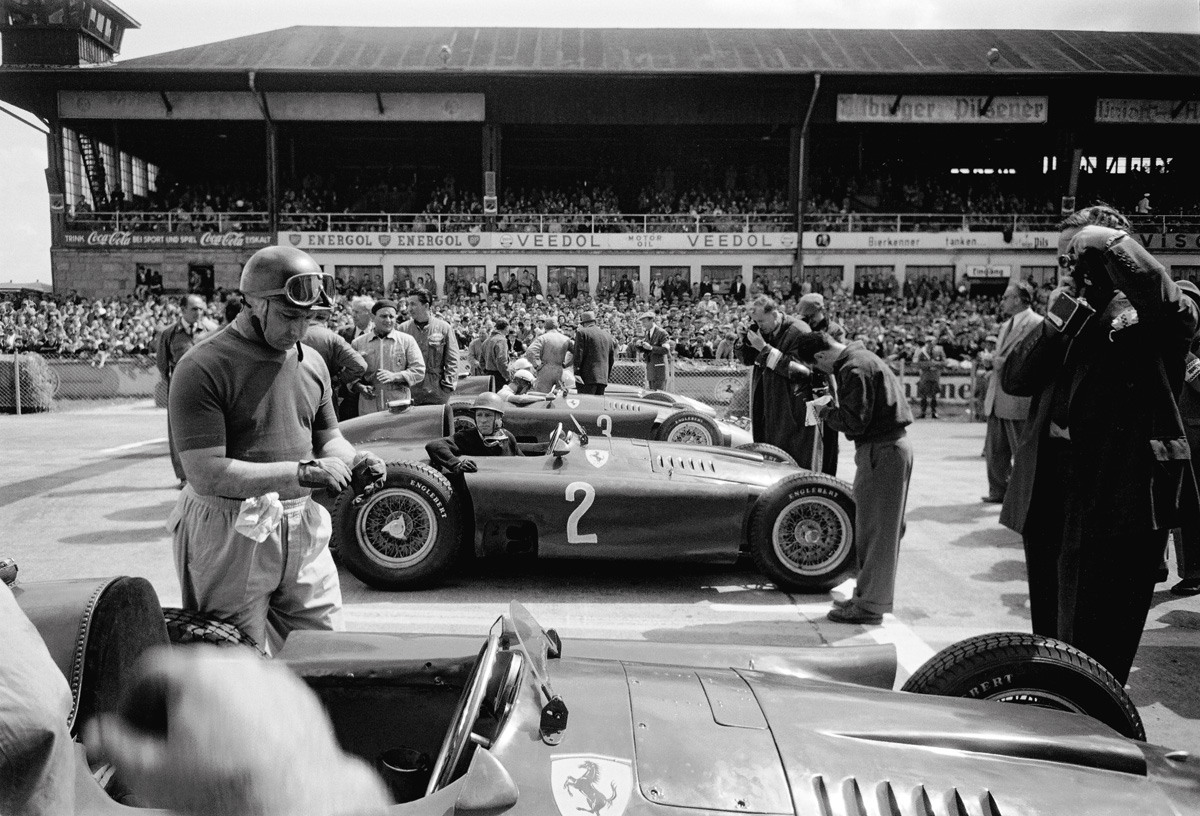 We don’t see images like this anymore, because there can no longer be four cars in the front row but only two, staggered. This is the grid of the 1956 German Grand Prix with Juan Manuel Fangio (close up) in pole position, flanked by the other two Ferraris with Peter Collins (No. 2) and Eugenio Castellotti (No. 3). Slightly concealed in the image is Stirling Moss with the Maserati 250F. © The Klemantaski Collection / Louis Klemantaski

As is its policy, presentation is to TASCHEN as white on rice! The most influential designer of today, Australia’s enfant terrible Marc Newson, put his genius to work, resulting in a cover design and bookstand that mirrors the Ferrari legacy. Appointed commander of the Order of the British Empire by Her Majesty the Queen in 2011, Marc Newson’s awards and accomplishments have rocketed him to fame and fortune since his flagship work, the Lockeed Lounge of 1986.

With a legacy of its own, TASCHEN continues to raise the bar of excellence and is, itself, the enfant terrible in today’s overly challenged book publishing industry. One can only ask if there is a book that would be absolutely too big to print; the only sensible reply would be TASCHEN on TASCHEN: it continues to go too far!