New York (NY), April 2, 2015 – Tiffany & Co. launches a new collection of watches in perfect harmony with the times, Tiffany CT60, inspired by founder Charles Lewis Tiffany, inventor of the New York Minute, and the city that was the cradle of its unique contribution to style and elegance.

The legacy of Tiffany can be told through the many incredible innovations that have marked its history, from its creation in New York in 1837 to the present day which launches a the new collection – Tiffany CT60. This new and innovative collection bears the name of its founder Charles Lewis Tiffany, the founder of the New York Minute – «60 seconds of pure possibility.»  This famous phrase was uttered for the first time in 1853, at the inauguration of the Atlas clock, almost three meters high, overlooking the 550 Broadway store.  Several generations of New Yorkers appropriated the clock and regarded it as the symbol of the energy and innovative spirit of the city. Today, the clock adorns the entrance to the flagship House on Fifth Avenue.

Displaying artistry and innovation, Tiffany & Co. began selling watches in 1847. Seven years later, Charles Lewis Tiffany signed an agreement with Antoine Norbert de Patek and Jean-Philippe making Tiffany & Co. the leading distributor of Patek Philippe watches in the United States. In 1874, Charles Lewis Tiffany built a factory of four stories high, on Place Cornavin in Geneva. This enabled him to meet a growing demand for pocket watches with advanced mechanism, chiming every hour and every quarter of an hour; but also the request for pocket watches encrusted with diamonds, with decorated mechanism of pastoral scenes and mythical figures in enamel, floral motifs and fine bands engraved in gold.

Charles Lewis Tiffany was the pioneer of many important innovations in the watch industry. The Tiffany watch, launched in 1868, was used for technical and scientific purposes, and for sporting events. Moreover, the company received several patents for its advanced techniques in watch movement and time-setting mechanisms. Furthermore, George Kunz,the famous Tiffany gemologist patented a luminescent tint for needles and hours.

By the 1880s, Mr. Tiffany had become a jeweler and watchmaker, recognized around the world for excellence in service and customer satisfaction. The people of the city relied on the unique public clock to keep accurate time. With the adoption of universal standard time in 1883, Tiffany & Co. began weekly adjustment of over 400 clocks belonging to its customers.

As a world leader, Tiffany & Co. archives highlight masterpieces displayed in Universal Exhibitions for over two centuries, having won numerous gold medals. The Philadelphia World Fair of 1876 honored Tiffany for its jewelry watches. One of the centerpieces of the winning entries in the Paris Exposition in 1889 was the American Wild Rose Lapel watch, a creation in diamond and enamel, imagined by the designer Paulding Farnham. Tiffany also received medals for its watch cases and astronomical clocks at the Chicago World Fair in 1893.

Tiffany & Co. exhibited an impressive collection of diamond cocktail and platinum watches at the New York World Fair in 1939, as well as «cocktail style» masterpieces such as the Trapezoid geometrical shaped wristwatch, tinted in gold ruby highlights. A Tiffany purse watch of the 40s inspired also the East West Tiffany watch, launched in 2015, with precise dimensions and rectangular lines.

Two watches launched in the 20th century were freely inspired by the country and the city where Tiffany & Co.  was founded: New York. The Streamerica® watch is an illustration of metal and gleaming shapes and surfaces of the American industrial movement of the 1930s.  The epitome of style, the Atlas® watch, launched in 1983, is a tribute to the great clock on the Tiffany facade of, whose Romans numerals and embossed diamonds form a legendary play of light. 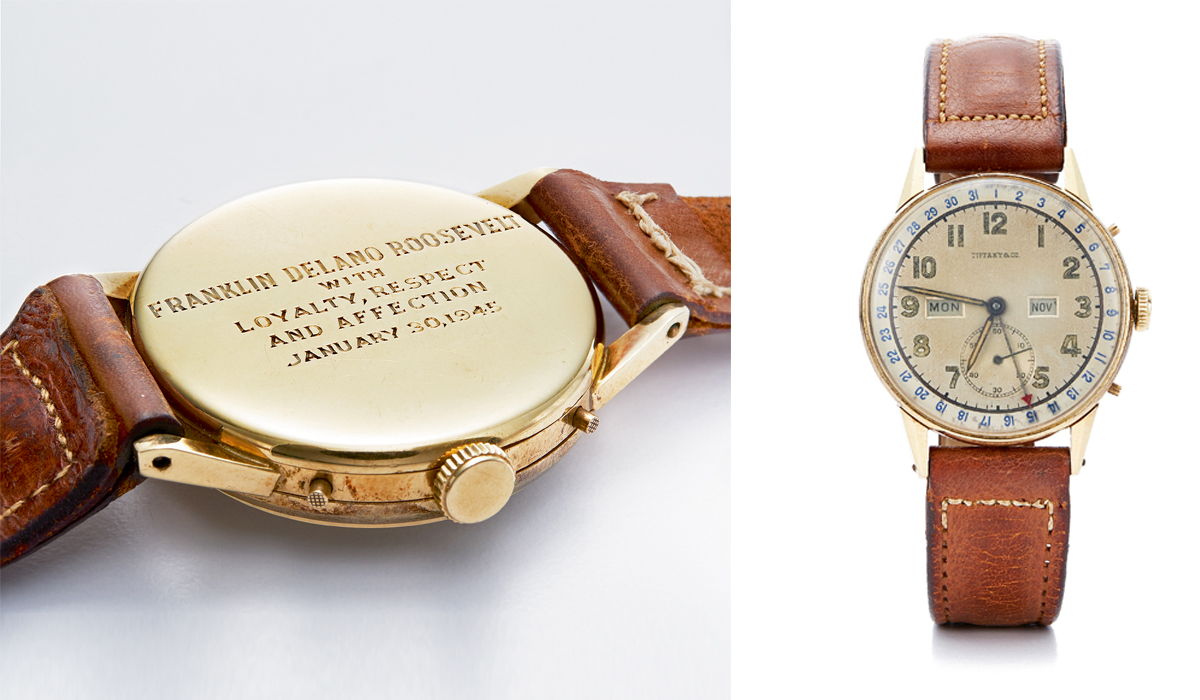 The Atlas® was at its peak! The collection illustrates the smooth transition from the old to the modern Tiffany style. A prominent jeweler and watchmaker, the Atlas clock represented not only a reputation of excellence but also the innovative spirit of the city of New York.

The new Tiffany CT60 collection is an ode to the builders who imagined an audacious future for the city. Charles Lewis Tiffany was one of them. A man of talent and courage, he was able to forcefully demonstrate that every second of the New York Minute carries innovation and grandeur.

The watch is master of its time, alongside new pieces that add to the Tiffany legacy, including the diamond cocktail watches, glamor supreme, and now the new Tiffany CT60 watch. Driven by hand assembled Swiss mechanisms, the collection captures the pulse beat of New York of the 21st  Century. The clean lines and the unique aesthetic recall to mind the Tiffany gold watch offered to President Franklin D. Roosevelt, one of the many American presidents who  purchased or received Tiffany watches. It bears the following inscription on the back of the case: «Franklin Delano Roosevelt, with loyalty, respect and affection.» Roosevelt actually wore the watch during the historic Yalta Conference in 1945.

This dynamic collection reflects the pace of modern life in the streets of New York as in every bustling corner in the world. Watches evoke energy and ambition which are summed up in the famous phrase Tiffany’s CT60 collection is a mixture of this acclaimed heritage and centuries of expertise in Swiss watchmaking.

These masterpieces, among the best, are powered by Swiss mechanisms. Honored techniques such as Geneva finishes, the snail and circular graining make them extraordinary pieces. Watches for men and women feature a stainless steel chronograph with a mechanical movement with automatic winding, a sun blue finish and numbers in silver dust. A calendar watch in 18k pink gold with a 42-hour power reserve with a shock absorption system and a sapphire crystal dial background is created for a limited edition of 60 copies, numbered on the back. Other watches include a watch with 3 hands in 18K pink gold with gold dust numbers and a diamond bezel. 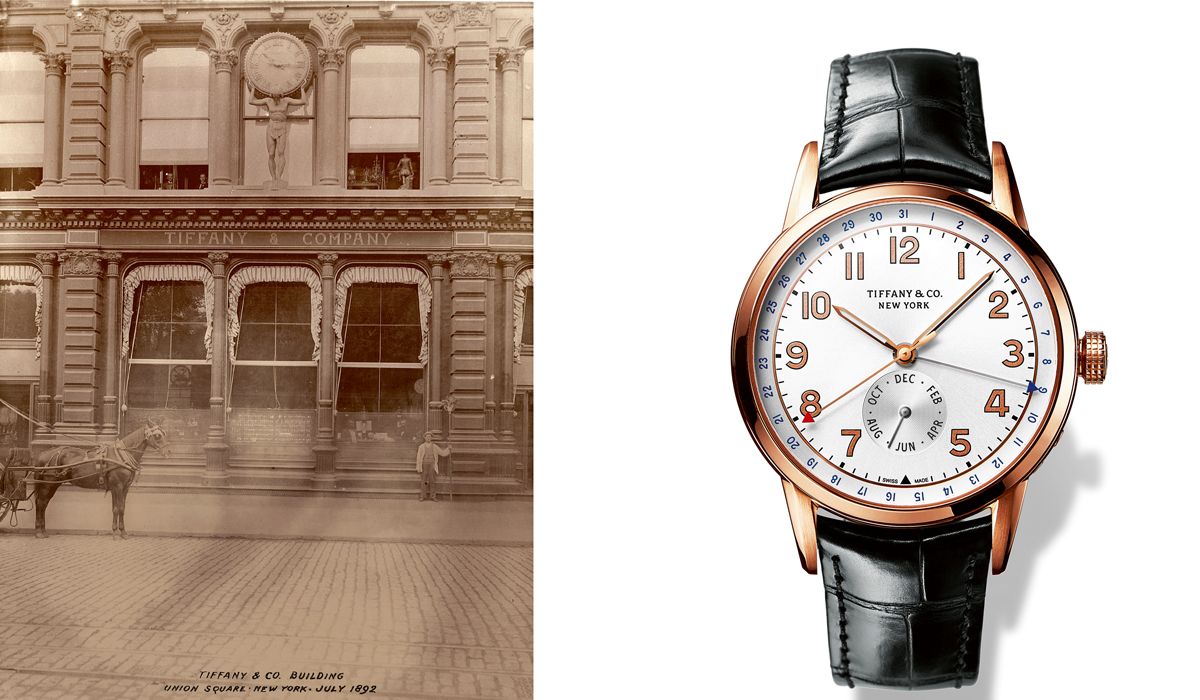 Tiffany CT60 collection is launched in accordance with the great tradition of watchmaking. It recognizes the value of time and the revolutionary ideas that come alive in moments of incredible virtuosity.

The pace of the collection differs from the Tiffany East West collection. The watch literally turns the rules of watchmaking to its advantage, with its carved rectangular form, in stainless steel, and a dial in black, white or blue.

The Tiffany CT60 collection starts at $ 4,250 and the Tiffany East West collection, from $ 3 500. They are both available in Tiffany & Co. stores worldwide.

Tiffany & Co. operates jewelry stores and manufactures products through its subsidiaries, the principal firm being Tiffany and Company. The company operates under the name Tiffany & CO.  in North and South America, Asia Pacific, Japan, Europe, the United Arab Emirates and in Russia. It also provides a direct sales service, be it by Internet, catalog and through corporate gifts.

PRECIOUS CANDIES...
WILD ABOUT HARRY
PIERRE CASIRAGHI TO SAIL UNDER THE RICHARD MILLE BANNER
IT'S TIME TO ENJOY TIME!
DREAMBOULE - LOVE IS LIQUID
MONTBLANC: IN CONVERSATION WITH ZAIM KAMAL