Jules Verne wrote it, the leaders of this 9th Vendée Globe did it! The now famous five circumnavigated the globe in 80 days, including Boris Herrmann (Seaexplorer-Yacht Club de Monaco) who crossed the line Thursday 28th January 2021 at 11:19:45 (French time), after 80 days 14 hours 59 minutes and 45 seconds.

For the German skipper in his first Vendée Globe it was a case of mission accomplished, as he finished 5th in real time.

It was an excellent result, even if the dream scenario did not go totally as planned. The last miles were particularly difficult for the sailor, who reported being in a collision with a fishing boat at 20:50 (French time) some 90 nautical miles (approx. 160km) from the finish and had been a serious contender to win the event. In spite of significant damage, in particular to the starboard foil, bowsprit and a shroud, Boris showed grit and determination in carrying out makeshift repairs, and making it a point of honour to finish the race.

“It’s really been a joint effort and I can’t wait to celebrate it with all the members of the Team. It’s the best moment of any race. Of course, what happened yesterday evening was heartbreaking for me but all’s well that ends well. I’m happy with my position given the circumstances. I finished in a good place. The damage to the boat is repairable, there’s nothing that affects the structure so it’s not too bad. The Vendée Globe has changed me – I’m not sure in what way yet. It certainly gave me a lot in terms of patience. You have to wait 80 days to finish the race so it’s a great feeling when you do. I have accomplished the adventure. It’s been a long time, more than 20 years, that I’ve been dreaming of this, it was a childhood dream. The Vendée Globe is something extraordinary. I came here to Les Sables d’Olonne to see several starts of the race. And now it’s done! It feels really good to fulfil this dream!” said an emotional Boris, impatient to take his wife Birte and their now seven-month-old daughter Marie-Louise in his arms, an emotional reunion after so many weeks apart. His words say it all. After 24,296 nautical miles of racing, he becomes the first German in the history of the Vendée Globe to finish this gruelling race. 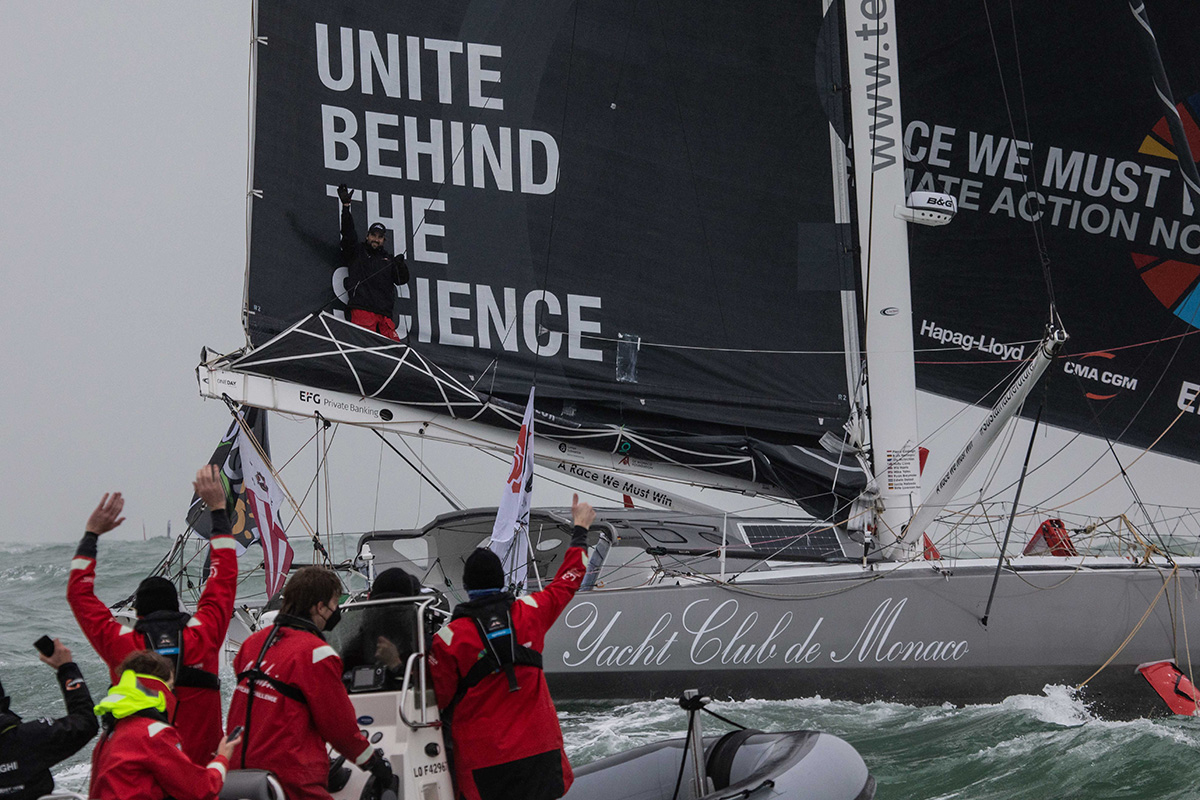 A great result for Monegasque sailing

YCM President HSH Prince Albert II was in Les Sables-d’Olonne to welcome Boris: “I understand his disappointment which we share with all those in the Seaexplorer-Yacht Club de Monaco team, led by Pierre Casiraghi. We are sad for him, because the performance was there. This does not detract from a very good race by Boris. We didn’t expect him to be in the top five for his first participation. Unfortunately this has happened to other sailors in the past and shows just how difficult this legendary race is, as there are so many criteria to take into account throughout this course across three oceans. Personally, I am very satisfied with his result and his behaviour throughout this Vendée Globe. He is an engaging and gracious personality, a true gentleman and great sailor. I am convinced we will see him again on the start of other big events. The sea is embedded in the Principality’s DNA. I am thinking of Prince Albert 1st and how a century on since his passing this relationship between Monaco and the sea endures, thanks to adventures like the one Boris has just completed, bearing the message of my Foundation to protect the oceans.”

“It’s just extraordinary, and the way he handled the situation and damage he sustained last night shows what a truly great sailor he is,” added Pierre Casiraghi, also present at the finish with YCM General Secretary Bernard d’Alessandri.

The YCM Vice-President has always been right behind his friend: “He had all the right qualities to pull off a great race, and he did better than that. It’s quite exceptional, I am so proud of him.”

Many were the congratulation video messages sent by key figures in sport and personalities who are very attached to the Principality, including former F1 World Champion Nico Rosberg, nine-time World Champion rally co-pilot Daniel Elena, freediving world record holder Pierre Frolla, tennis players Novak Djokovic, Mischa and Alexander Zverev, adventurer Mike Horn, AS Monaco striker Kevin Volland, and Giovanni Soldini – it was in 2013 on Maserati skippered by Soldini that Boris and Pierre met during the Cape2Rio. All sent a personal message saluting his extraordinary achievement. 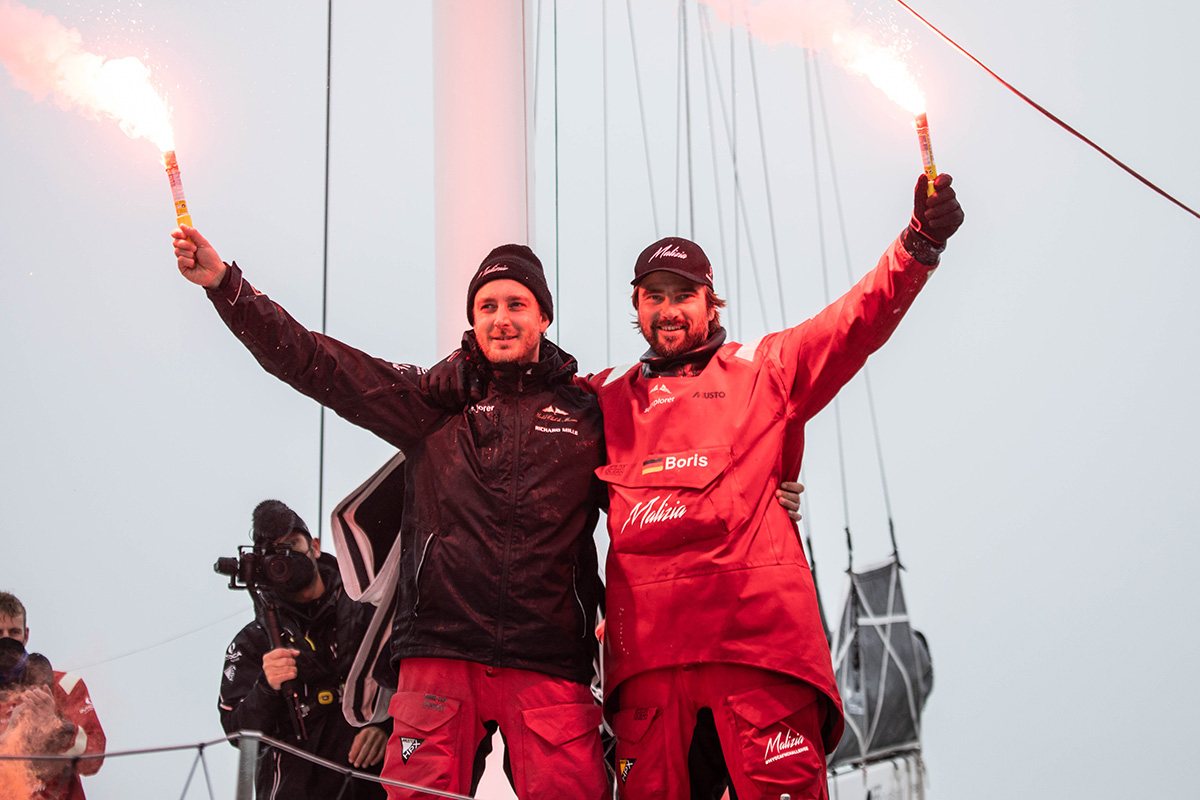 Of course the time compensations awarded to three skippers (Le Cam, Bestaven and Herrmann) involved in the rescue of Kevin Escoffier played a major role in the ranking. While Charlie Dalin (Apivia) took line honours by crossing the line first after 80 days 6 hours 15 minutes and 47 seconds, he is not the final winner of the 9th Vendée Globe, an unprecedented situation in the history of this race. Never have boats been so close and the margin of victory so narrow in the final miles.

The trophy goes to Yannick Bestaven (Maître CoQ IV) from La Rochelle who arrived 3rd into Les Sables-d’Olonne and a fireworks display. He takes up the mantle from Armel Le Cléac’h (winner in 2016) due to his 10 hour 15 minute time compensation, which means he finished the Vendée Globe in 80 days 3 hours 44 minutes and 46 seconds.

All those captivated by the too-close-to-call finish to this thrilling race were left speechless by this almost inconceivable spectacle after 80 days at sea. From the Azores to the Bay of Biscay, the key players drew on all the resources they had left, making the minutest adjustments to maintain speed to the bitter end. An exercise in finesse where Boris excelled: “He had a very intelligent race,” said Team Malizia skipper coach Will Harris. “He has several round the worlds to his credit and that paid off in this Vendée Globe. He’s also the skipper who has sailed the most miles on his IMOCA.”

From the Azores, Louis Burton (Bureau Vallée 2), Charlie Dalin (Apivia) and Boris Herrmann (Seaexplorer-Yacht Club de Monaco) took the east option while Thomas Ruyant (LinkedOut) and Yannick Bestaven (Maître CoQ IV) headed north to hook into stronger winds. On Tuesday, when Charlie and Boris were passing Cap Finisterre in a 8-12 knot west-south westerly, the Ruyant-Bestaven duo continued north in 15-17 knots. Between the two pairs, Louis continued his route north before putting in a gybe ahead of Maître CoQ IV and LinkedOut. Routers already had their calculators out to see who would be lifting the cup, but it was still all theoretical.

Early Wednesday morning, Boris and Charlie took the east option along the Spanish coast on a port tack to Les Sables-d’Olonne. Louis, Thomas and Yannick had already started their final haul to the finish on starboard tack. The tempo picked up off Vendée a few hours before the finish. 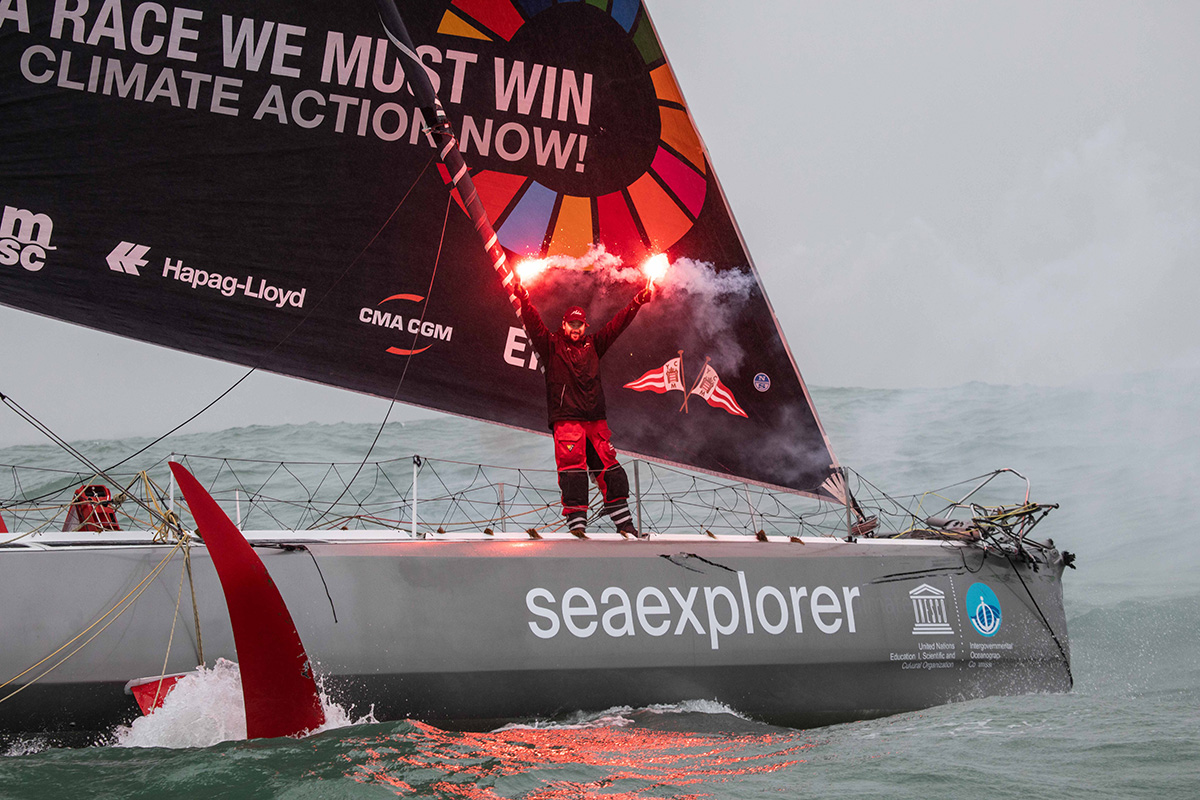 All this time, Boris Herrmann (Seaexplorer-Yacht Club de Monaco), a member of UNESCO’s Intergovernmental Oceanographic Commission, managed to continue his other mission. An autonomous laboratory on board, controlled by Boris, has been operating 24/7 collecting data from water samples and transmitting them to scientists at the Max-Planck Institute for Meteorology in Hamburg, Géomar in Kiel and Ifremer in Brest. Data on air and water temperatures, salinity, PH and CO2 from oceans around the world has been collected, with that from remote regions which scientists are not always able to reach being of particular interest.

Boris’s commitment is palpable and reflected in the name of the boat, as Seaexplorer is a reference to a Kuehne + Nagel led initiative to measure the impact of CO2 emissions in the shipping freight sector. Reducing emissions is also the goal of another initiative, initiated by the Yacht Club de Monaco and mobilising the luxury yacht sector, which established the Superyacht Eco Association (SEA) Index, a benchmark for measuring the environmental impact of 40+m yachts.

Unflappable, poised and discreet, Boris reflects to perfection the values of the Principality in carrying his message about protecting the oceans. He has also undoubtedly inspired children all over the world to discover new vocations, as evidenced by the many messages he has received from them during this legendary round the world race.