The concept of travel has always been the DNA of Louis Vuitton, a brand with a story based on the joy of discovery, confirming its high-tech luxury philosophy.

The long-standing bonds linking Louis Vuitton with the Principality of Monaco find confirmation in their shared outlook on the world, and Nicolas Ghesquière’s decision to present his first Cruise collection as Creative Director on the Cote d’Azur in 2015, and to return to the Maeght Foundation in Saint-Paul-de Vence with the 2019 Cruise collection, powerfully evokes the origins of the Louis Vuitton legend and its ties with the French Riviera, that exclusive meeting point between art and travel, luxury and the desire escape the everyday. A decision that has proved more than satisfactory: Nicolas Ghesquière brought to Vuitton the idea of fashion as reference to that container of diverse cultures (contemporary art, bringing together painting, photography, sculpture, literature and cinema) capable of generating experimentation and new creativity, like in the visions of this region given to us by the great artists it has seduced (Monet, Renoir, Picasso, Chagall, Matisse and Dufy), leaving traces of this passion in their work. 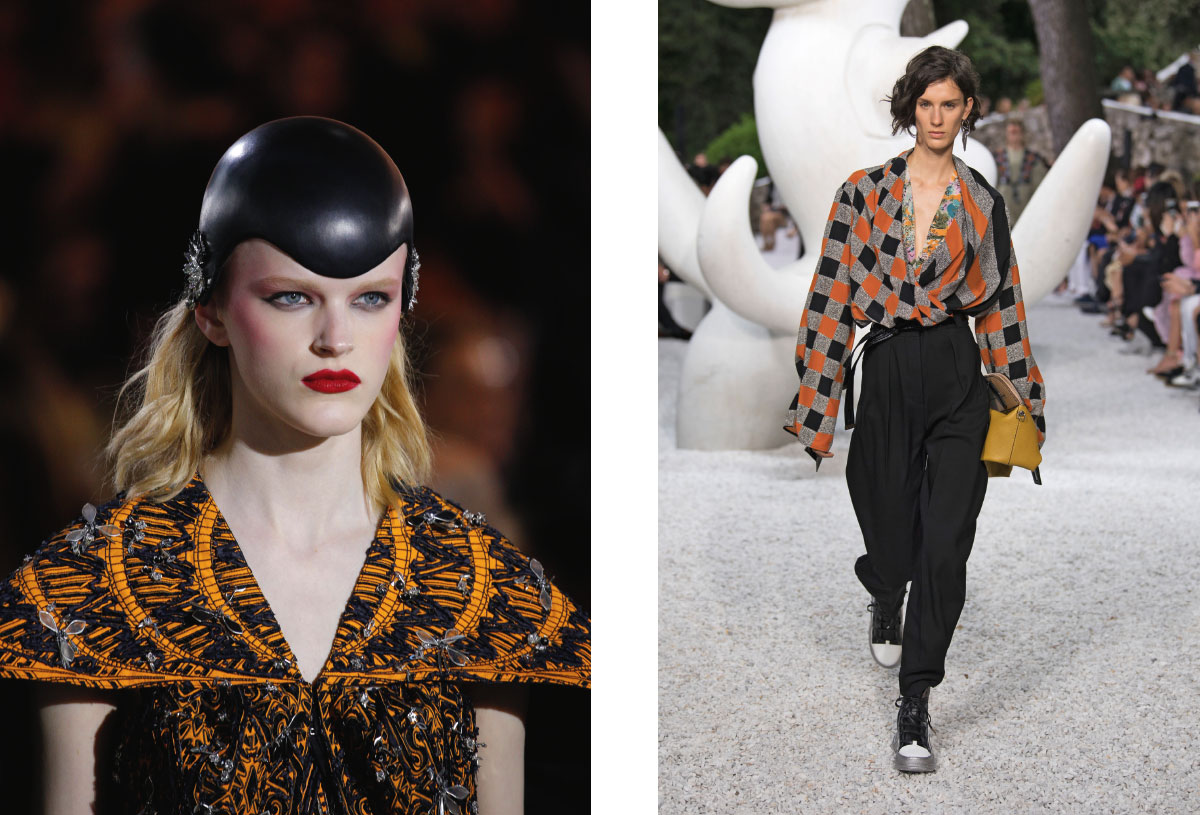 Perhaps the first step toward that concept of inclusivity so much in vogue in fashion today. A pioneer of these ideas as well and faithful interpreter of a world in continual evolution, Nicolas Ghesquière always manages to grasp the signs of change from the generation Louis Vuitton originally addressed, and responds with a more mature wardrobe, developed for men and women struggling with increasingly pressing rhythms of life. A fresh, pragmatic approach, closer to the street but still in perfect balance with the tastes of Vuitton. At the show/event, staged last May at John F. Kennedy International Airport’s TWA Flight Center, designed by architect Eero Saarinen in 1962, the feeling of travel, forever the DNA of this fashion house, was truly in the air along with its story, forever based on the joy of discovery. 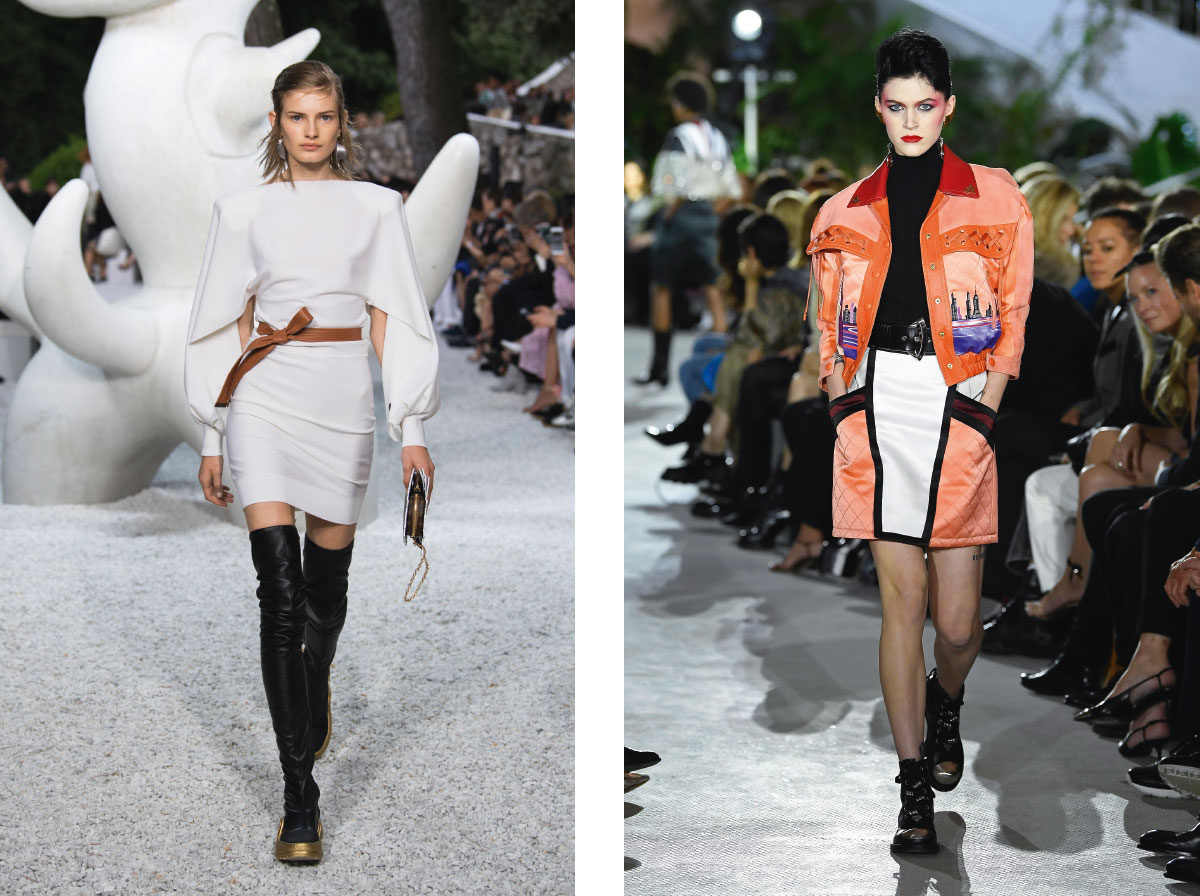 As Nicolas Ghesquière himself explains, “I was very lucky to have landed at the TWA Flight Center toward the end of the ‘nineties. It’s something I’ll never forget. Soon after, this place was abandoned, forgotten for around twenty years but now it’s coming back to life. It’s like a sanctuary forgotten, rediscovered and recharged with enchantment, and it’s an immense pleasure to see it living again in a new guise as a hotel. It’s a sort of rediscovery of somewhere new and out of the ordinary, a part of the American cultural heritage”. We all know Louis Vuitton’s origins as a manufacturer of luxury trunks and luggage. The immediate success of his business led Louis Vuitton to expand its activities and, in 1859, open the company’s first Atelier in Asnières. Located in north-east Paris, the new workshop initially employed just 20 people, but by 1900 the number had grown to 100 and just before the onset of the First World War in 1914 had reached 225.

Over the decades the historic Atelier underwent a series of extensions, one of which annexed the Vuitton family’s private residence, but it has always remained in the same place Louis Vuitton products were originally created, exactly as they are today. And now, with the Cruise 2020 collection, Vuitton skilfully marries sartorial tradition with high-tech innovation. It’s where the dialogue between France and America is a long, long conversation the Maison began with its first transatlantic crossing, and that continues on in this collection designed to stimulate the fascination America has for French fashion, that excellence we’ve come to know as couture spirit, reciprocated by the Maison’s interpretation of New York’s legendary buildings transposed into sophisticated prints, precious embroideries and brilliant brocades. The forms echo the codes of the purest Vuitton style signed by Ghesquière, with broad shoulders and masculine trousers with darts, tops like sculptures and architectonic emblems, make-up decisive as an early MTV video. Combat boots with metal inserts designed to take on the urban jungle of New York, that jungle punctuated by exotic trees creating a forest amongst the sinuous forms of the architecture. Pinstriped fabrics for an androgynous touch, up to the crystals that glimmer on tops and dresses. Like the skyscrapers you can see from Brooklyn Bridge. 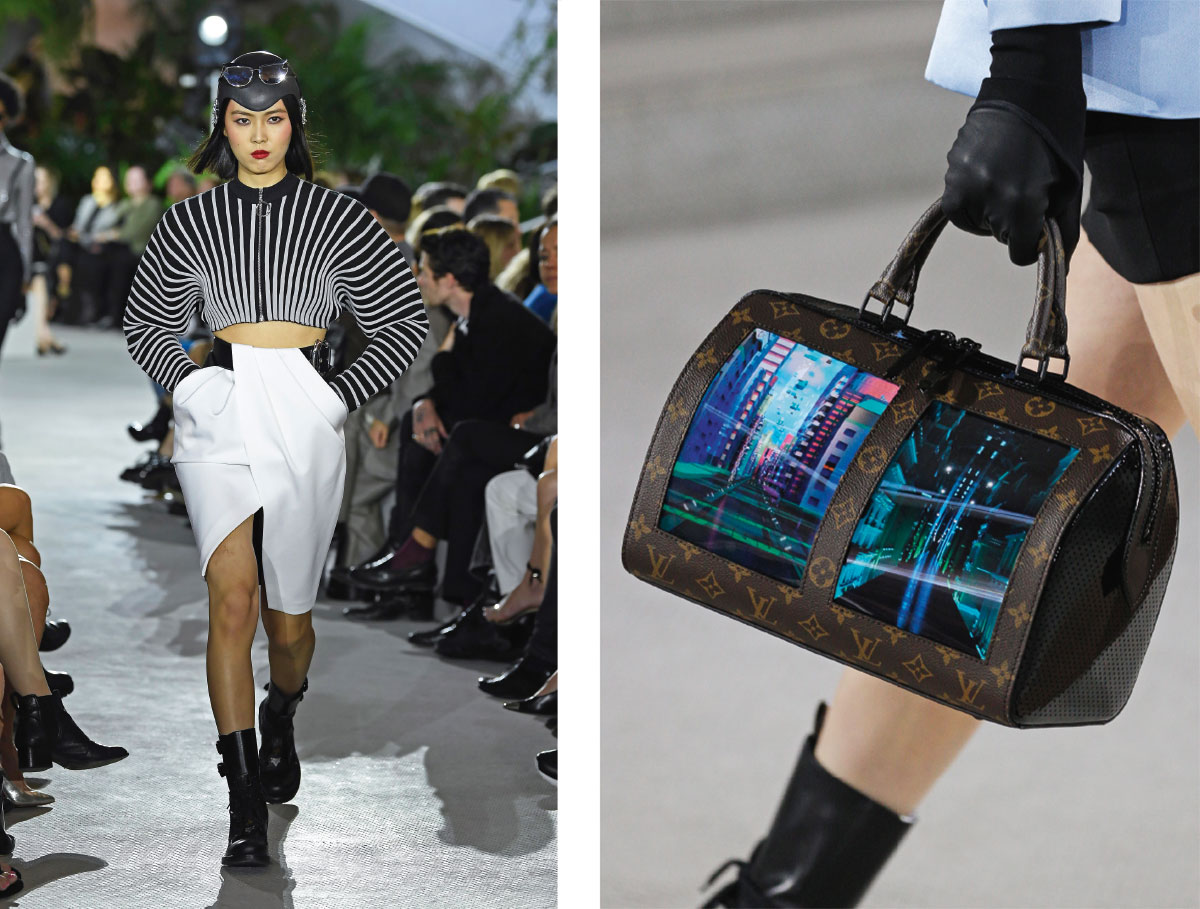 The new prototypes of the iconic Louis Vuitton bags certainly don’t go unnoticed, incorporating flexible digital screens in a step toward the internet of things where even fashion accessories are connected. The project is absolutely in line with the very latest research by the French fashion house, aimed at cancelling the distance between your smart TV or phone and your favourite bag, turning it into a sort of extension of them. The collection’s two hi-tech models, defined Canvas of the Future, are the Speedy handbag and the iconic bucket bag, a great Vuitton classic. Neither model has the traditional LV logo, which is substituted by sinuously curved smart screens thanks to AMOLED technology, specialists in flat flexible screens. It’s a collection that looks like a reunion of underground cultures, but that encapsulates the glam of the Maison as well, in an epoch – ours – that’s all-in-all capable of absorbing every reference and aesthetic, to use at will and abandon as soon as another more appealing one comes around. In this Louis Vuitton collection you can find many, and celebrate timeless capacity of the brand to marry savoir-faire and innovation. 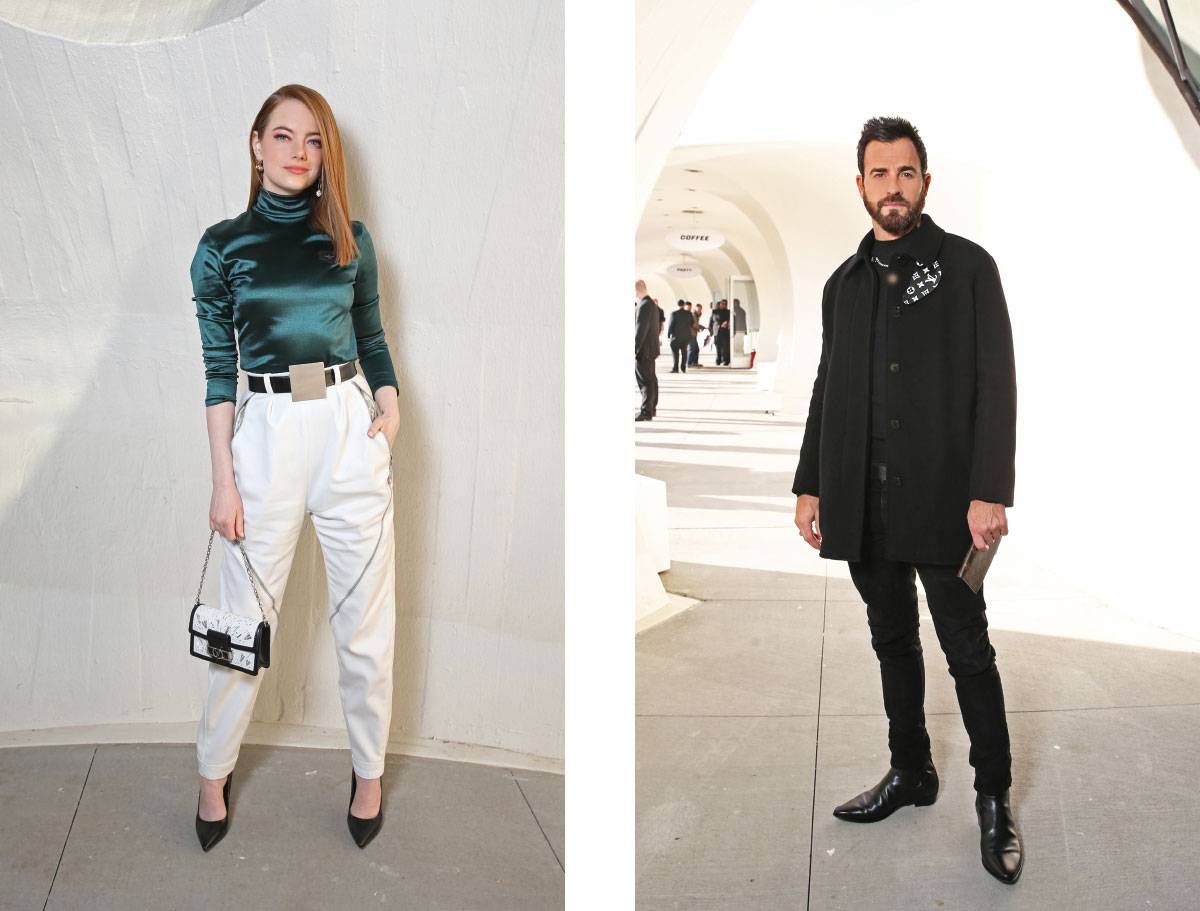