They call him “boss” but he has all the air of a mild-mannered gentleman. His handshake accompanied by a deep gaze. Chef Robuchon knows people, feels what they want. “You can’t do great cuisine if you don’t like people. To my young apprentices I always say: cook like you’re making dinner for you mother, or your girlfriend.”

When he sits down in front of me on the sofa at the Metropole Hotel, with faithful Christophe Cussac at his side, I try imaging dozens of Michelin stars all together twinkling over their heads, the number of acknowledgements of excellence bestowed on this cook-cum-legend, a TV start since the last century.

The beginnings for Joël were in the kitchens of the convent where he spent his childhood. Where he learned the trade he would put to good use. The beginnings for Christophe were more classical: born to restauranteurs, he went to catering school, met Joël, and was the secretary for a while before asking for a transfer to the kitchens. He’s been at the stoves since 1977, instigated by his father who asked Robuchon to follow his son in his true passion.

To be a good chef these days takes both hands and head, knowing how to find the ingredients, working them and expressing your ideas through the dishes you create.

The media attention the figure of the Chef attracts through cooking programs, of which Robuchon was a forerunner already in the ‘nineties, creates vocations and so was a great boost for the sector, but you have to consider that more than 50% of students graduating from catering schools usually give up the idea of becoming a chef. The TV shows really don’t correspond to the everyday reality. Working in the kitchen is very hands-on, it’s fatigue and constant commitment. And not all young people are cut out for a career that demands such a great deal of sacrifice before achieving success. Some personalities from ‘high gastronomy’, surrounding themselves with great cooks, achieve great things by being the conceptual directors of their kitchens even though they’re not true cusinier.  To be the chef takes some real background, mastery of cooking techniques and preparation of the various elements. Even a simple béchamel takes certain skills that can only be acquired through direct experience. Tiny details that make all the difference. Joël tells me how when he was involved in the Meilleur Ouvrier de France competition, out of more than 600 candidates with the same recipe to make with the same ingredients, not one dish came out the same as another. It takes passion to cook. And is there any free time left after the daily commitments of such a high level chef? Joël Robuchon passes his time visiting his restaurants around the world, that’s his way of relaxing. He doesn’t go to the restaurants of his competitors to spy on what they’re doing, but only accepts invitations from colleagues for moments of conviviality at their tables. Chef Cussac strongly affirms that it’s a trade where passion matters, and a great deal of time has to be spent improving and experimenting. He doesn’t have hobbies, and dedicates any free time he has to his family living in the `arriere pays’, and relaxes at home.

Joël is very much occupied with training young people, in the conviction that the transmission of knowledge and values is the real foundation of the trade. It’s for this reason he’s working on a project for a chef’s school in Poitiers, for which he’s just obtained planning permission, able to accommodate more than 1,400 students. A school based more on the application of techniques than on theory. Joël remembers many great chefs who’ve passed away without passing on their wisdom to the new generations, and that was the thought that drove him in the development of his school project, the spirit of transmission from maestro to disciple, from teacher to student. It will be a school based on practical work in the kitchen, with various types of gastronomy, open to the public who can eat there and buy the pastries and bread made by the students at the school shop. Joël wanted to retire at 50 but is still there, in his black apron. His passion drives him to keep on going, the day he no longer takes pleasure in the trade will be the day he finally stops. 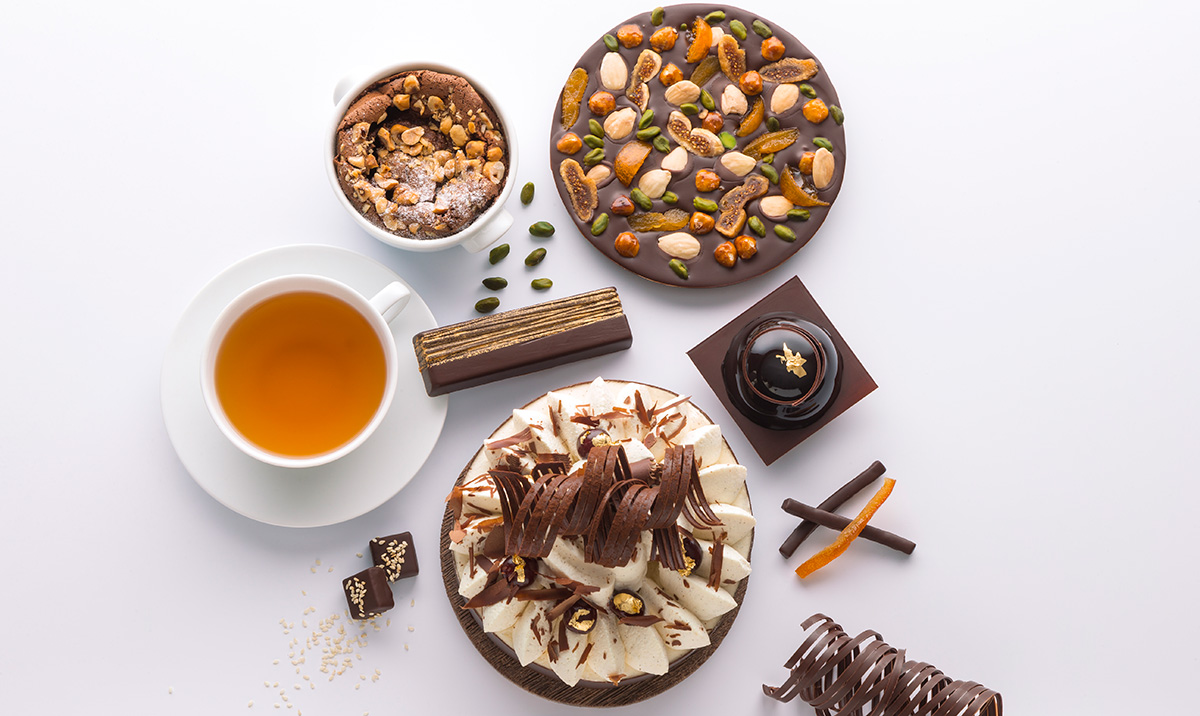 Robuchon and Cussac get such so much satisfaction from their restaurant in Monte Carlo, opened at the Metropole Hotel in July 2004. They feel that the principality has the best clientele in the entire world, clients who have been everywhere and done everything, a Monegasque and international public of the highest order, elegant, who want to be pampered and who offer the highest degree of appreciation, and are always in the know when it comes to changing trends and seasons.

For winter at the Metropole the Bar à Chocolat is opening for the second year running, along with pastry chef Patrick Mesiano and barman Mickael Bellec, who’ve taken on the challenge of transforming the Lobby Bar into a temple of chocolate creating exquisite pastries and chocolates to accompany their celebrated cocktails, infusions, teas and above all hot chocolate made with the grand cru of the world’s best cocoa beans. Beverages for connoisseurs and lovers of the finest chocolate. A step above the rest, like everything Robuchon does.