Arnaud Faye is brimming with enthusiasm this warm March morning. While the unseasonably warm weather – and dazzling azure of the sea as we look out to St-Jean-Cap-Ferrat and beyond from our lofty Eze village vantage point – has us all in glowing form, it’s in fact the humble lemon that has the Executive Chef of the La Chèvre d’Or beaming, having just returned from a visit to one of his suppliers, the Cassart family, at Nice’s Libération markets.

His local markets also happen to be some of the best in the region. “The quality of the citrus fruits this morning was extraordinary” he enthuses. It’s high season for lemons, oranges, grapefruit and more along the Mediterranean coast. “All this produce, grown in the area and picked yesterday for us.”

While that bodes well for today’s diners, it also highlights a breadth and quality of locally-sourced ingredients that the chef, who arrived at the celebrated five-star hotel in 2016, identifies as of the definite advantages of working on the Côte d’Azur. “Along with the weather, of course,” he laughs.

Good products, grown at your doorstep are the very factors that stirred in Arnaud a desire to be a chef from a very young age. “My origins are quite close to land. I spent a lot of time at my grandparents’ house, where my grandfather would take care of his vegetable garden. What is quite funny is that my grandparents each had separate kitchens; my grandfathers was downstairs, next to the garage.” Growing up, they would split duties for large family get-togethers. “My grandmother would prepare the starters and desserts in her kitchen upstairs while, downstairs, my grandfather would take care of the meat and vegetable dishes,” he recalls. Here, in the Auvergne, he was always surrounded by fresh produce. “We would collect milk from the farm and forest fruits to use for jam. It’s something we were surrounded by and it gave us so much pleasure.” 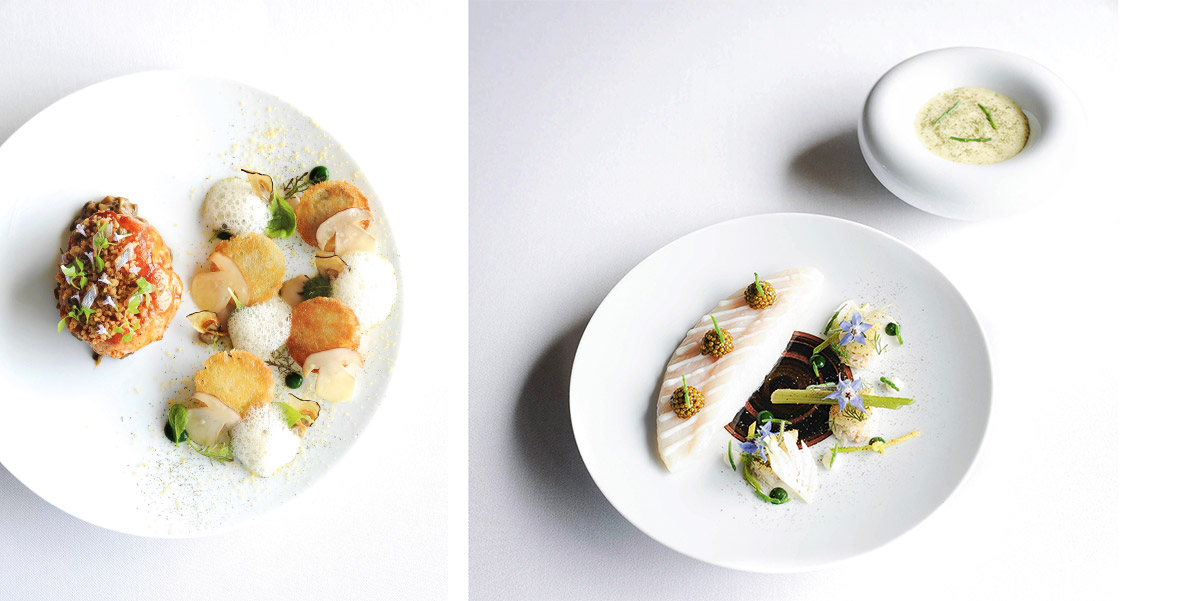 His early career was spent learning gastronomic cuisine in the kitchen of three Michelin star restaurants, such as Bernard Loiseau’s Relais in Saulieu and L’Arnsbourg in Baerenthal in the Lorraine, before becoming Head Chef at the L’Espadon at the Ritz Paris in 2007, at the age of 29. He guided the restaurant to a second Michelin star in just two years, before moving to the neighbouring Mandarin Oriental when it opened in 2011. Another two Michelin stars were obtained in only a year. It was towards the start of his fourth year as Executive Chef at the Auberge du Jeu de Paume hotel in the Domaine du Chantilly (which again obtained two Michelin stars under his leadership) that he received a call from an old friend that would eventually trigger a move to the mythical Eze establishment.

“I worked with Julien Dugourd, our pastry chef, over fifteen years ago at L’Arnsbourg,” Arnaud explains. “We got on really well and had kept in contact and, when Ronan Kervarrec (his predecessor) left, Managing Director Thierry Naidu asked Julien who he would like to work with, and his response was me.”

Today, Arnaud is responsible for the alfresco Café du Jardin, the leafy Les Remparts restaurant, as well as the eponymous ‘La Chèvre d’Or’ gourmet restaurant which has maintained two Michelin stars since 2000. It’s a move he’s still delighting in. “The Chèvre d’Or is a Relais & Châteaux, a historic house, with one of the best views in France – and beyond. It’s an incredible place with real history and it’s wonderful to be able to play a part,” he says.

The hotel’s unique setting – where luxury rooms and suites are scattered across a maze of medieval houses inside the fully-pedestrianised hilltop village – sets it apart from anywhere else Arnaud has worked. “As do the stairs,” he laughs again. He has also been able to plant citrus trees among the hotel’s manicured terraced gardens to use in his cuisine. An upcoming permaculture project is also planned for this year. “I’m interested to see the results,” he says.

Another passion is the distinct identities he is able to create in his kitchens. “Here is different to Paris,” he says. “Even though there will be similarities in products, what is interesting is how to use these products to craft different identities.” So what is it here at La Chèvre d’Or? “Here our cuisine is sunny with a distinct marine influence,” he says. It is also proudly local. “We really wanted to promote the boundaries of the historic Nice County; from Saint Laurent du Var to Piemonte in Italy. We are trying to balance this very Mediterranean aspect with some of the mountain flavours as well, since the Mercantour is just behind us, by using best the products of the region, such as lemons and chickpeas” 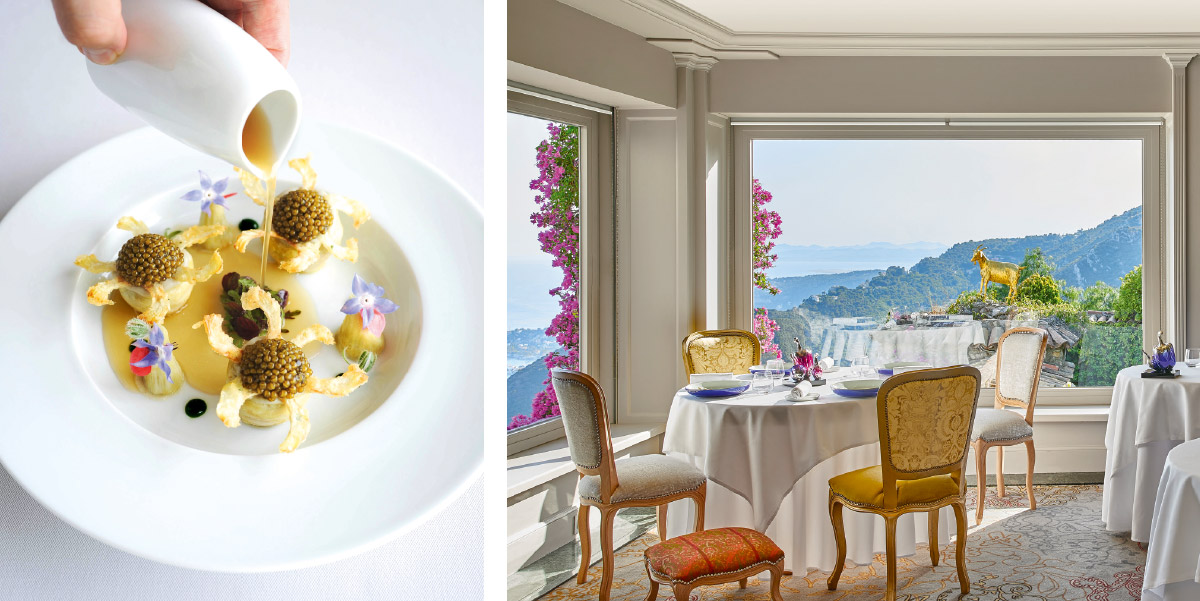 Which means serving gastronomic cuisine using not only what Arnaud labels ‘noble products’. “Our signature dish here is centred on the artichoke,” he says describing an artichoke broth infused in lemon flowers.  The key, he explains, is to take the best from the land and offer a new take on the plate. Or even in the presentation: the restaurant is currently serving a seasonal dish of celeriac risotto with truffle in a bowl and spoon crafted out of local olive wood to much customer acclaim.

“We use tradition as a base for the contemporary,” he explains. The amuse-bouche offer a voyage of niçois discovery, starting with pissaladière (a focaccia base topped with caramelised onions) to salade nicoise and lemon tart served with parmesan. All, of course, given a gastronomic makeover. “The little dishes really say we are here, we are in the region of Nice,” he explains.

Arnaud admits his knowledge of local cuisine was limited before moving to the Côte d’Azur, so the last three years have been a learning curve that has kept him busy. Inspiration has come from local markets and fellow chefs, such as Dominique Le Stanc at La Merenda in Vieux Nice, mastered with time in the kitchen. “Of course, your technical skills and knowledge in the kitchen remains the same, but discovering different produce does lead to new learnings,” he says. For instance, he’s now working with certain types of regional fish that he had never previously encountered. Old fashioned trial and error is teaching him what techniques work best. “It’s up to us to go back to basics to get the best out of the product,” he says.

The continual evolution of the dining experience at La Chèvre d’Or also keeps him challenged. “Our image, of course, is gastronomic cuisine, but there’s also our Café du Jardin with lighter fare, such as salads and pizza on the menu.” When the garden café re-opens in May, two pizzaïolos, trained by the Denis Job, first French winner of the Pizza World Championship, will be spinning bases topped with the finest ingredients. “Everything is in place to achieve only the highest quality,” he says. This season will also see a Mediterranean- and Italian-inspired menu served at Les Remparts for both lunch and dinner, while at La Chèvre d’Or, the fine-dining experience continues … “with a few new touches, whether in materials or presentation.” One important ingredient is sure to remain the same, however. “Enjoyment,” Arnaud says. Which he seems to be doing on the Côte d’Azur.

In 2018, Arnaud was one of seven chefs to be crowned Meilleur Ouvrier en France (MOF), the industry’s highest honours. His three dishes impressed a jury presided by Alain Ducasse. It was the fifth time he had entered the competition, which is held every four years. “For me, the MOF is the end of 14 years of competition. It’s something very personal, you do it for yourself. It’s a recognition from my peers as well.”

FLOCONS DE SEL
DO YOU OWN PROPERTY IN THE UK?
RITZ-CARLTON - PARADISE IN MANAMA
PARADISO NICOLE ET PIERRE- GOURMET DELIGHTS ON THE CROISETTE!
JOËL ROBUCHON & CHRISTOPHE CUSSAC - 31 STARS AND COUNTING
RECONNECT AT THE HOTEL METROPOLE