Destined to work in a bank in his home district of Canton Ticino, Carlo Rampazzi instead embarked on a creative path that in forty-five years led him to break every rule of design and decoration, with a single creed: to express his own personality.. and help us to do the same.

Ok, I confess: I often get things wrong when I’m researching a person in preparation for an interview. I always read up on them and take a look at any previous interviews they’ve done. All this obviously leads me to form an opinion, to create some expectations.

The phase prior to this interview with Carlo Rampazzi was no different, the curiosity I felt as I waited for him at the bar of the Majestic in Cannes was obviously influenced by what I’d read. I was asking myself what this person would be like, this man who had decorated – and coloured! – some of the most important homes and yachts on the planet. What kind of attitude will he have, this designer who, for the simple fact of not finding a fruit bowl he liked, went to Hermès and had one made to his own design (which, after 16 years, is still one of the leading items in the exhibitions of the maison …) What kind of dialogue could I have with someone who, during their career, just to do everything, really everything, went as far as designing armchairs entirely covered in shells and flowers for the king of pop? 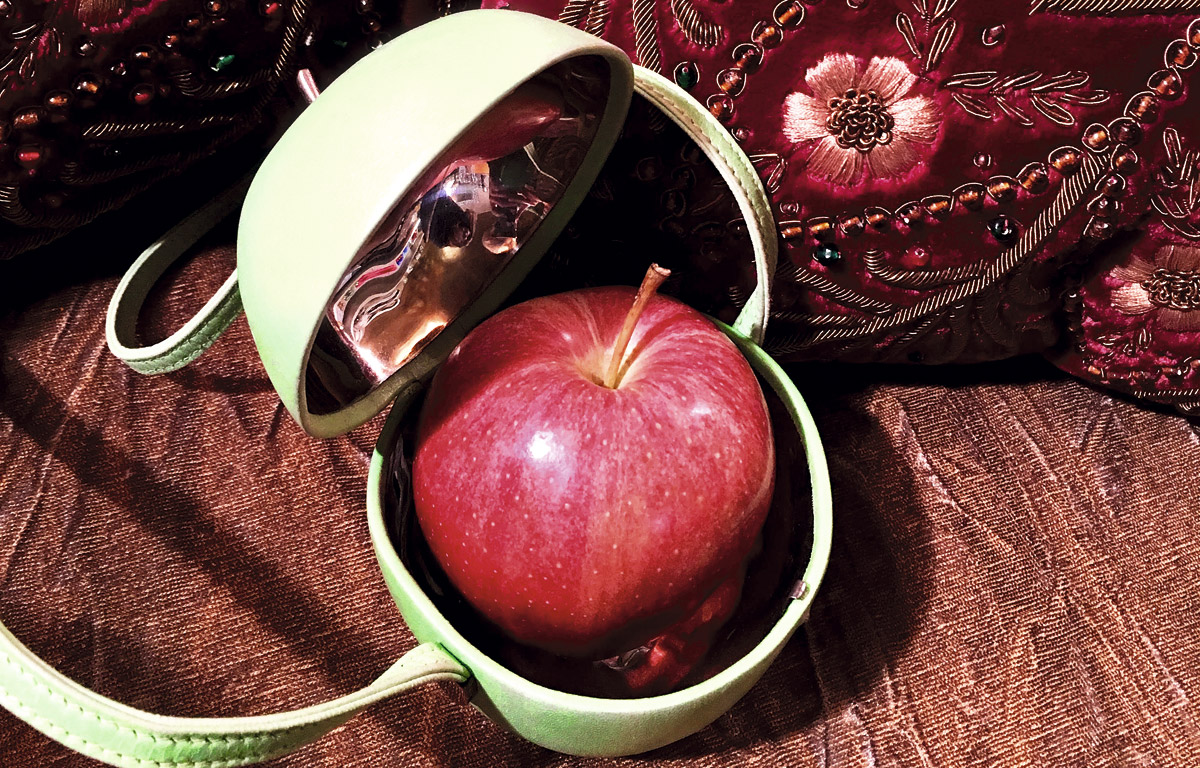 Ok, I confess: I made the same old mistake. Carlo Rampazzi arrives right on time, immediately asks to turn down the volume of the music that’s playing too loud for a comfortable chat, orders a drink and starts asking questions about me, the magazine and my life on the Côte d’Azur.
We start the interview the other way round, with him asking the questions and me having in some way to turn the conversation around, to get him to tell us something about his life and the way he works. As for the way he interacts with his clients on the other hand, I was already pretty clear: the man has a sincere interest in probing the personalities of his clients, understanding their expectations and then…. Doing exactly what he wants.
Not due to any egocentricity (although, clearly, Carlo Rampazzi has a decisively strong character), but rather the absolute mission to free the modern world of its lack of personality, from the fear of “not being liked by everyone”. As we’ll see, he also has a very strong sense of humour, having fun destabilising his clients, but above all the courage to bring them into extremely high and intentionally shocking expressive dimensions.

’ll give you an example. You come to me and say: “Architect, I don’t want to make any mistakes, so let’s do the house beige”. That’s their first mistake!

F.1.M. : Architect, on your site, the slogan “I don’t follow any style, any trend” is pretty evident. But yours is a very characteristic style. How do manage to resolve your clients’ need to express their concept of a home with your aesthetic choices, so strong and recognisable?
C.R. : I don’t think any meetings happen by chance. Very often I meet clients who simply don’t have the courage to do what they know would make them happy.

I’ll give you an example. You come to me and say: “Architect, I don’t want to make any mistakes, so let’s do the house beige”. That’s their first mistake! (laughs… Ed.)

So I tell them: I’ll give you a present, two tickets for Rome to go see the Sistine Chapel… can you imagine it all grey? You understand now? Why don’t we have the courage to do something colourful, something that can stand the test of time? Why do you want to make everything so anonymous, maybe with some “important painting” in the middle of the wall, like in a museum? If you want to see an important painting you can go to a gallery!

And my wall? Why can’t it be red, yellow and green and express my personality?

People have become conditioned to think they have to make their houses so they’re liked. But when the guests leave they’re there alone. With their insignificant wall. I’m not saying it’s an insecurity, but a lack of capacity to love ourselves, and our own tastes.

F.1.M. : About your clients, there are obviously some with a pretty decisive character. But can the ones who ‘think beige” handle a character as strong as yours?
C.R. : Absolutely, because my aim is to find them their colour, their identity. I have to help them bring it out. My work consists of creating a home they’ll have to live in, and completing it with a rug, an ornament or a painting of their own taste, objects to insert into the context I create thinking of the dreams and ideas they communicate to me. I just help them build the house of their lives, the house that was already in them but that they lacked the capacity or courage to realise. That’s what my work is really about. 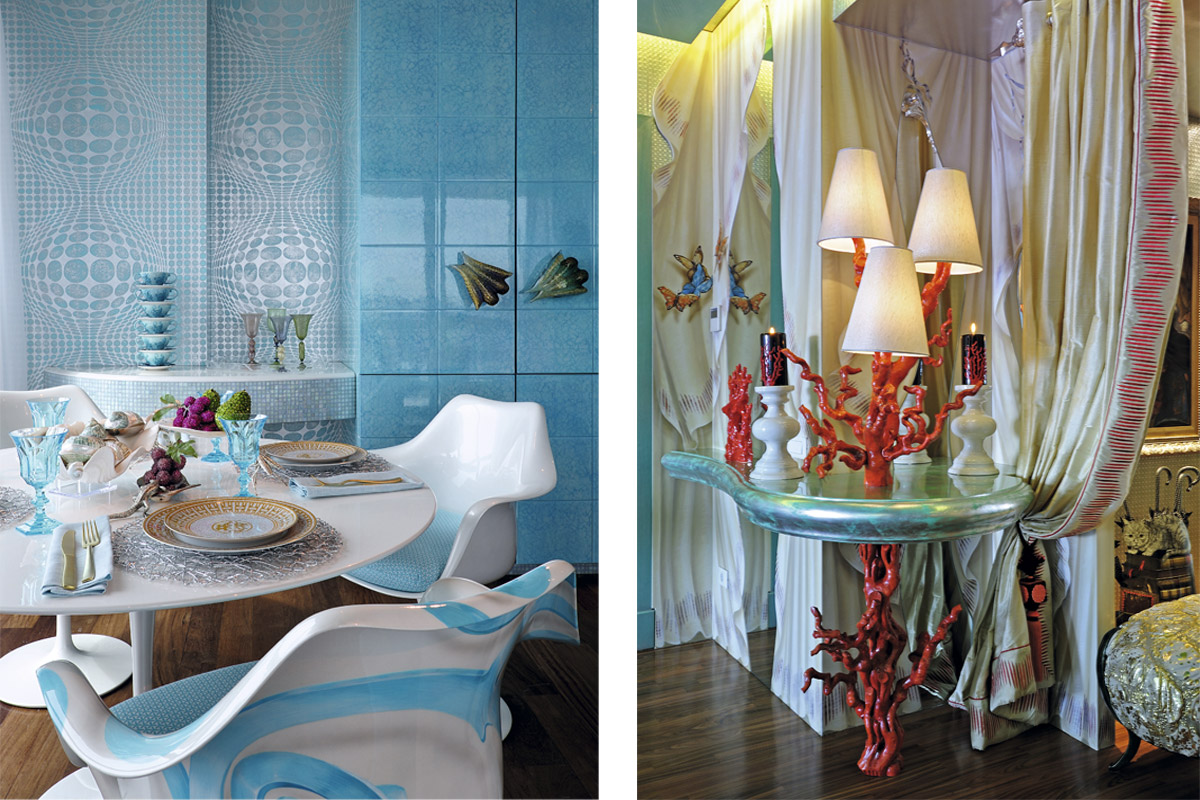 F.1.M. : So there’s a lot of dialogue in the initial phases of a project?
C.R. : A great deal of dialogue. And sometimes this dialogue leads me to tell them they’re not quite ready to work with me…

F.1.M. : And in that case, how do they react?
C.R. : Badly, especially if they’re the kind of clients who think that having a sufficiently fat wallet is enough to embark on a realisation of this kind!

F.1.M. : Does it ever happen that even after a long and constructive dialogue, the first draft of a project is simply too shocking for the client?
C.R. : But shocking is my business! Maybe the client will take a year to be ready for it, but they always come back.
I’ll tell you another thing. When I do a house, I’ve got a rule: in the final week of the build, the client can’t come and check out the works. In this phase the combination of colours and forms is absurd, incomprehensible. The client would have a meltdown. They should only see the result when it’s finished. Recently a client of mine insisted on seeing their project three days before completion. So I told her I’d send the workers away, have the furniture delivered and let her finish the project. She backed down and came two weeks after and cried tears of joy. I had interpreted the dream she was unable to realise.

It sometimes happens that I insert something absurd, excessive. And the client has it removed. After a couple of months they always call me, asking me to bring it back because they feel something’s missing …

F.1.M. : Let’s get back to grass roots a bit. How did you begin your professional, creative career?
C.R. : I’ve always wanted to work in this trade. But I was originally destined to work in a bank…. Can you imagine me working in a bank?? I really had to fight with my parents to get out of that!
I went to a boarding school, studied business, then to an art school (of which I remember absolutely nothing!) and then, in 1974 my parents told me that nobody would ever let me design anything for them, and that I had to go work in my father’s building business, in the admin department. I lasted two months, then I went to the Milan Furniture Fair “Salone del Mobile” where, to put it briefly, I bought some furniture that I’d fallen in love with using my dad’s company’s bank details. When I got home I explained to them that either they could open a furniture shop for me or they could keep the two dining room suites, two lounge suites, etc…
It was a bit of a shock to them and I realise that now…. They forbade me to use the family name, but I got my shop though! 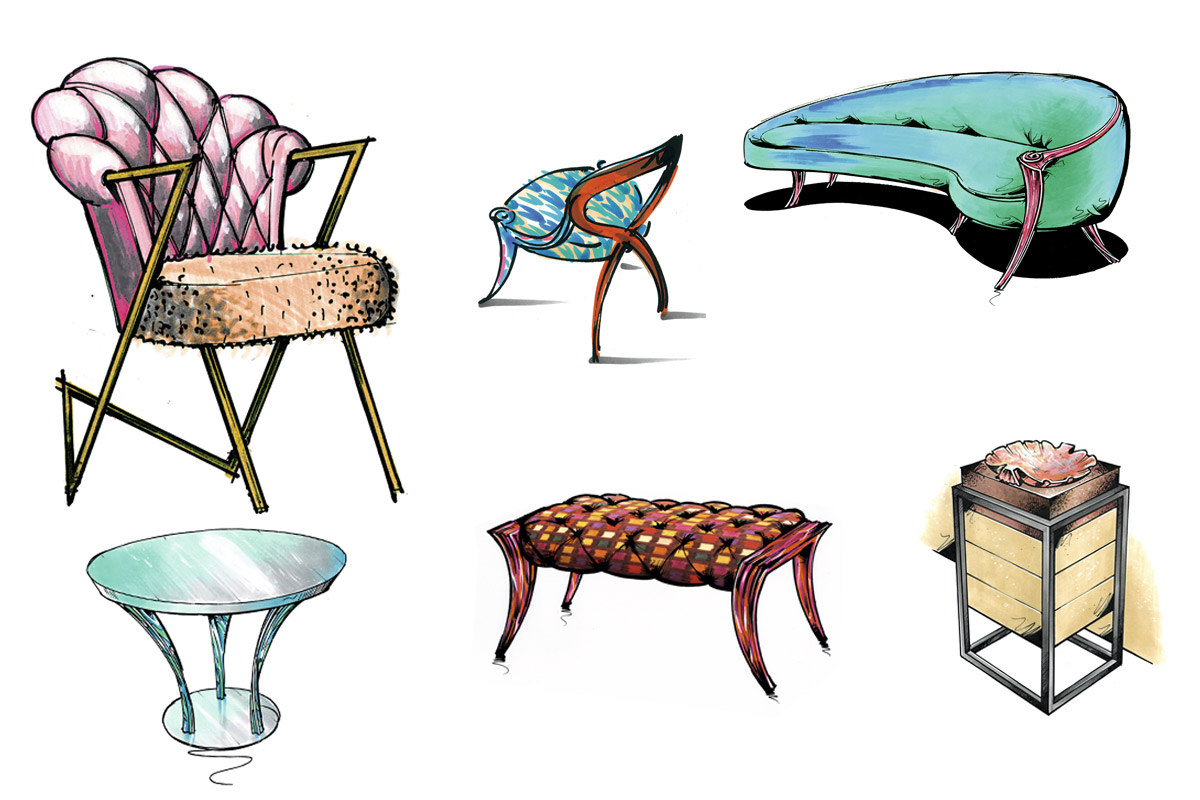 F.1.M. : Since then, an uninterrupted career…
C.R. : EIt’s been a career full of professional, but above all personal growth. Work that has enriched both my person and my creativity.
But everything came about naturally, basically because I’ve always lived my life in a totally spontaneous way. I did everything thinking that was the only way to live, and I was convinced that everyone lived the same way… I had originally women’s clothes designed by Karl Lagerfeld adapted to fit me, I ordered a lizard green Bentley that still now, after fifteen years, is still admired everywhere I go, my friend Olga Berluti made some shoes exclusively for me with a four inch heel, with feathers…
And I sincerely thought everyone did things like that!

F.1.M. : Your work has brought you into contact and to work with some
important people…
C.R. : One of my strengths has always been that of being able to enter and exit any situation with total independence. I can’t be bought by anyone. When I started out I did some furnishings for the great opera and theatre director Giorgio Streheler. He asked me to work for him in the theatre, but I could never have gone into a world I didn’t feel was my own. I said no.
I’ve even refused to work for other types of client… once I refused a commission after seeing the client cut spaghetti with a knife!
For me, freedom to work with who I like has always been my rock, essential not only professionally, but on a human level as well.
I love having a direct line to people otherwise inaccessible, to be able to talk to them without filters. It’s an acknowledgement of the value of my work, and my freedom.

F.1.M. : Is there something in particular you love designing? That stimulates your imagination more than others?
C.R. : No, my creativity is linked to the moment. It isn’t an end in itself. Let’s say I couldn’t walk into the woods alone one day to find inspiration. I’d come back fifteen day later completely drained. I have to be with people, there has to be the urgency to satisfy some need. Of the moment.