There must have been something in the water during the early 1990s. It was the decade of Campbell. Crawford. Evangelista. Moss. The Original Supermodels. Hedonism reigned supreme under the guise of the avant-garde and opulence never seemed more at hand.

It was also the decade of the Lady Moura; the Original Superyacht. And this original superyacht is now up for sale.

If you have ever strolled along the sun-warmed stones of Port Hercules, or enjoyed a chilled glass in one of the many restaurants overlooking her, the stalwart figure of Lady Moura is as certain a sight as that second glass of rosé. Since her launch in 1990 – at the time the 9th largest superyacht in the world, and the most expensive – Lady Moura has called Monaco home, setting the standard of every vessel to follow her in since.

At 105m with a volume of 6,395GT, while she may seem small in comparison to today’s gigayachts, at the time she was an absolute phenomenon. Her arrival into Monaco would signal the start of the summer season, adding to the glamour of Ayrton Senna and Alain Prost veering past during the Grand Prix, or playing witness to the antics of Michael Douglas at The Cannes Film Festival. Lady Moura was Monaco.

It was German shipyard Blohm + Voss who was awarded the honour of building her, strictly to the specifications of her first owner – that same owner who has now placed her up for sale with Camper & Nicholsons International. Under the auspices of legendary naval architect Luigi Sturchio the build was pioneering, bathed in an aura of mysticism; helipads, an indoor swimming pool with retractable roof, movie theatre, gym, disco… such things had never been seen on a yacht before. And that was just the start. This same aura surrounds her today. 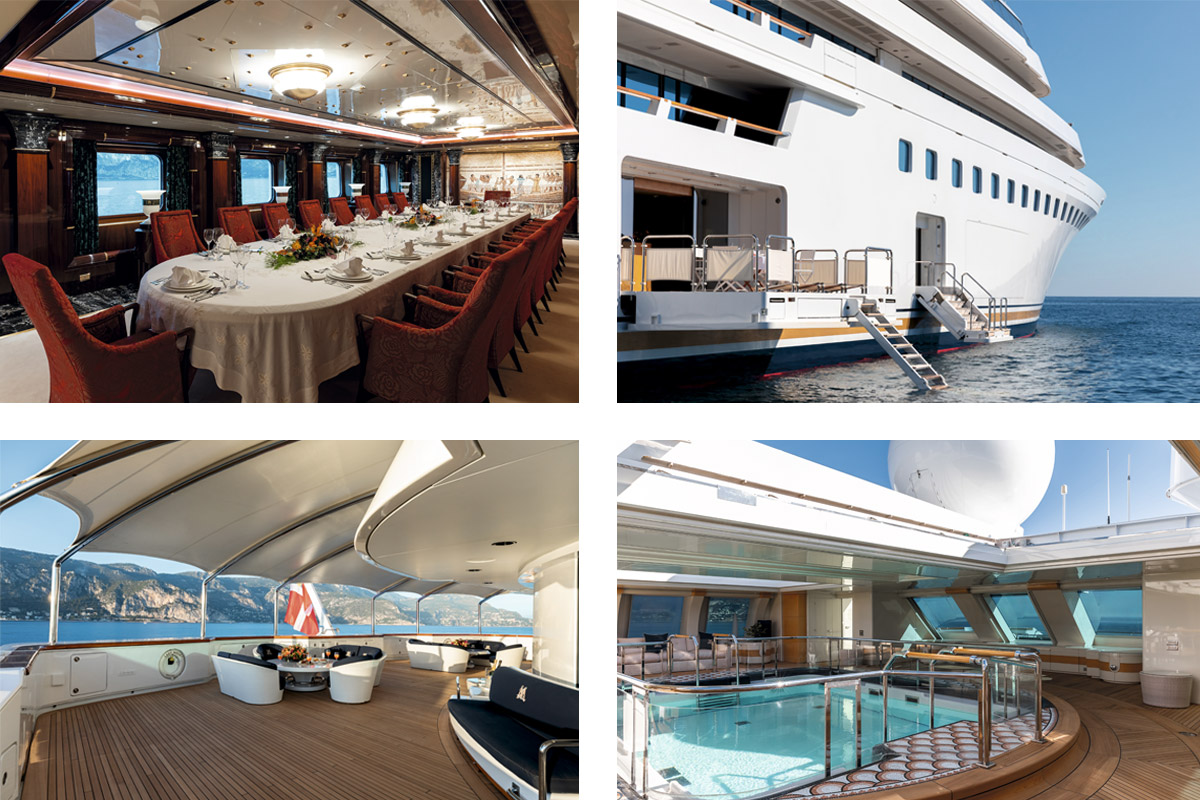 Even for those of us who may not be in the market, the sale of Lady Moura is as poignant as it is exquisitely exciting. She has never been chartered. Her guest book reads like a who’s who list of the global elite. And as such, her interior has remained somewhat of a mystery.

She was built to be a family home, albeit one with a full-time bakery, helipad and DJ room. She was also one of the first to enjoy a seaward beach club. Some family home indeed. From gleaming marble ante-chambers to video game zones and spas, Versailles-inspired furnishings to a garage chokka with toys and tenders, Lady Moura is an old girl who can still keep up with the best of them. Luckily for her, there are two fully-equipped ICU units and a fulltime doctor onboard.

Superyacht-y gimmicks aside, lovers of functionality rejoice at her six gangways, hydraulically operated shell ports, doors and cranes that still function as beautifully as the day they first saw water. Recent upgrades have improved her generators, engines and teak decks, as well as a refurbishment of her crew and technical areas with a new lick of paint on the hull to top things off. Who said you can’t teach an old dog new tricks?

So what is the new lucky owner of this floating ambassadorial residence to expect?

Utter privacy for one. From her seven decks one is dedicated entirely to the owner. With a full-beam suite and six additional family cabins, there is a total of 2,600m2 of private living space. The yacht in its entirety can host 27 guests, cared for by 72 crew – some of whom have served for her entire 28 years of seafaring. And should the new owner wish for a spot of global circumnavigation (aside from the Arctic zones, unfortunately), Lady Moura is one of only a very few private yachts to have a certified sewage treatment plant. This is one area the new owner may want to avoid.

Her original interiors remain intact. Her carpets, flooring, silk walls and staircases are maintained as if she were the Metropolitan Museum of Monaco. Yet Lady Moura still feels like a modern yacht. Which is why the opportunity to purchase such a legacy has seen this touted as the sale of the century. 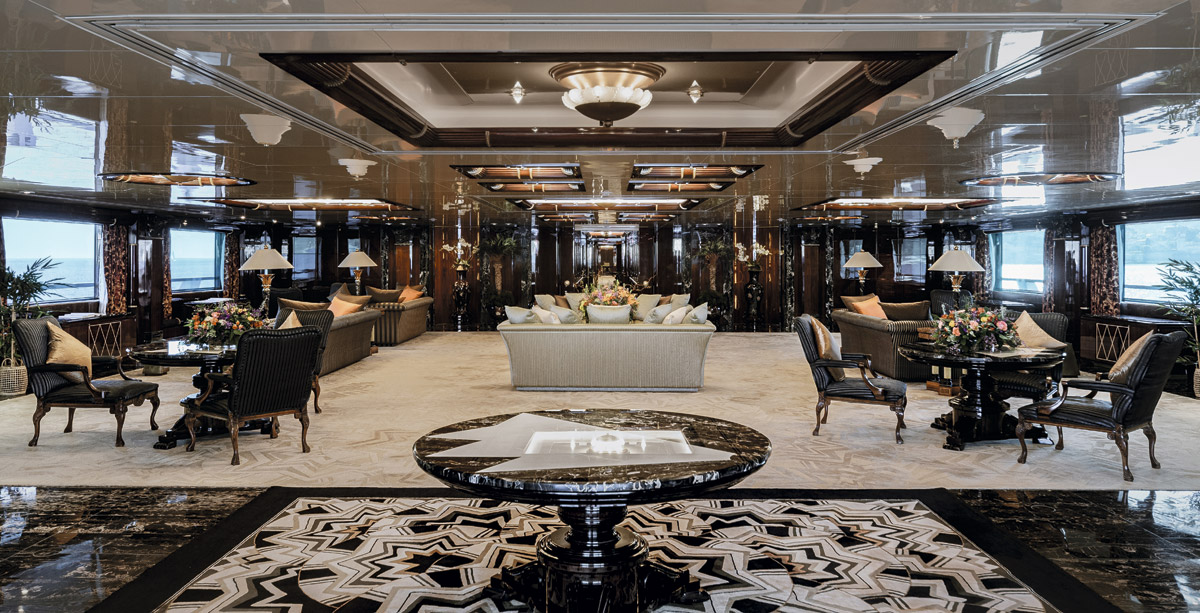 Such pedigree is hard to come by, and we hope that whomever is lucky enough to call her home for the next thirty years still brings her back to Monaco. It just wouldn’t be the same without her.

F.1.M. : What represents Lady Moura in the Yachting and luxury world?
P.C. : The LADY MOURA is a true convention defying superyacht and when it was built in 1990 it elevated the luxurious side of yachting to a whole new level. Many of her features have now become essential for superyachts of all sizes such as, for example, the revolutionary beach club and an exclusive family-only Owner’s deck.

LADY MOURA was and still is the pinnacle of lavish elegant extravagance within the yachting world.

F.1.M. : How is evolved/changed/increased the yachting market in the last decades ?
P.C. : The yachting market is a constantly transforming, growing market, one that centers around yachts and superyachts, which in turn, are now shifting from being a purely luxurious asset to a financially beneficial one. Most yachts are now remarkable investments, considering the growing charter market, ensuring owners earn a sizeable profit on top of its running and maintenance costs. Considering a yacht’s mobility, the end of high season in one part of the globe means its high season in the other – that’s the beauty of being able to move your asset to meet the market demand.