Writing for a magazine is a privilege: you get to see some really interesting things, visit unusual places and meet a multitude of very different people all in the arc of single day. You can be amazed, fascinated and learn something new from everyone you meet.

Of all the different kinds of people I have the good fortune to interview, there’s one that fascinates me in a particular way: the collector. Maybe it’s because personally I’ve never been fascinated by something to the point of it becoming an obsession, or maybe that things have to power to interest but not necessarily totally enthral me, so the collector is something of an enigma. I envy them for their capacity to dedicate themselves, body and soul, to a single purpose: to collect, catalogue, restore and preserve items that for others perhaps have only relative significance.

And often, along with their pride in the results of their efforts, they’re surprisingly modest, not really seeking any spotlight for fear of drawing attention away from what really matters to them: their collection!

This is certainly the case of a French music producer and manager I recently met, who’s worked for decades in the Rock’n’Roll and Blues universe and who started collecting electric guitars back in the ‘eighties. “In those days ”, he explains, “for musicians, transporting instruments was a pretty significant cost and very often they’d leave their spare guitars with me, ready for when they came back to France for their next tour ”. As the years went by, sometimes they used the instruments to pay my costs for keeping them, and gradually being paid in guitars became something of a habit. One guitar after another … now the collection numbers over a hundred unique examples. Series produced guitars but personalised for a famous artist (Lenny Kravitz’s python skin guitar, Francis Cabrel’s acoustic guitar and one of Bill Wyman’s for example), but over and above all of them, his collection boasts the highest number of examples of what, for lovers of this instrument, is an absolute icon, the six-stringed holy grail : the legendary Wandré.

Who? What? What’s a Wandré ? Aren’t the legendary guitars just Gibsons and Fenders??
Any of you out there who’s not a musician, raise your hand if you’ve ever heard this name before! 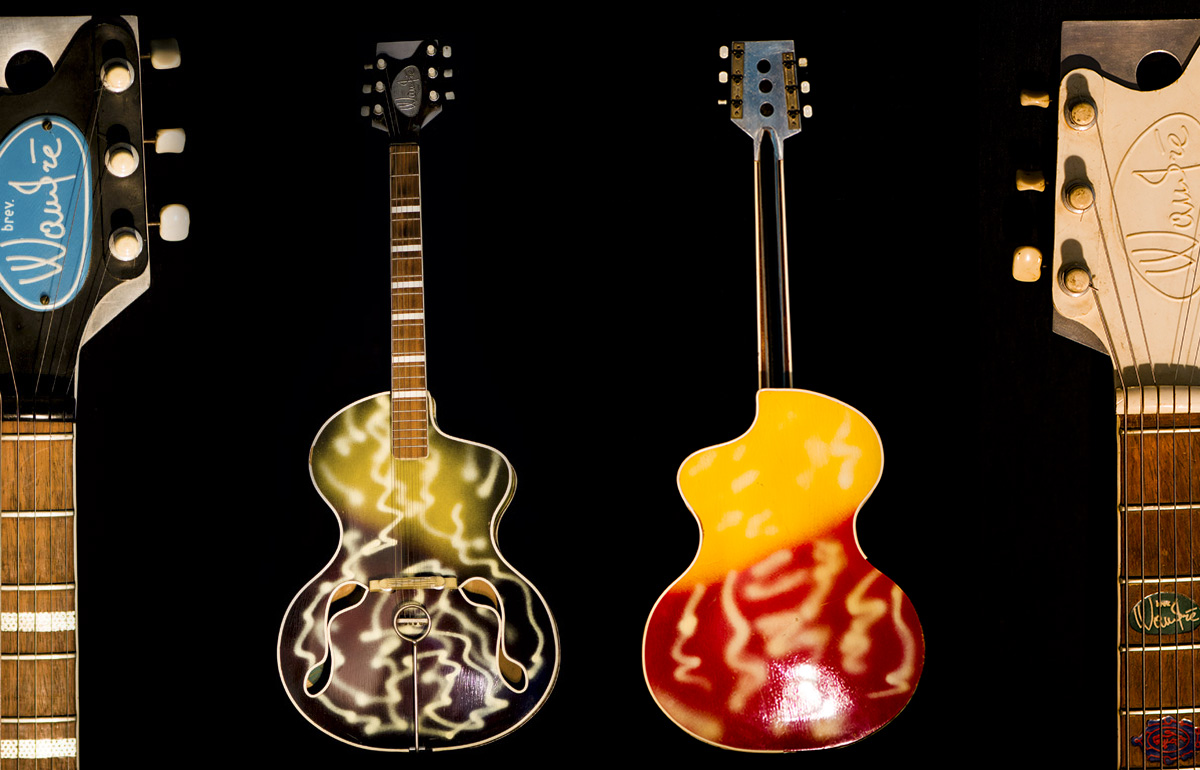 Going back to his story, our anonymous collector will now enlighten us.
“At the start I was most interested in who’d owned the instrument, not the instrument in itself, but twenty years or so ago I happened to be glancing through a guitar magazine and saw a Wandré, and I saw the light. I’d never seen anything on the contemporary scene with that kind of culture, and the reason was quite simple: Antonio Vandre Pioli, aka Wandré, was an Italian guitar maker who manufactured his instruments between the late ‘fifties and early ‘sixties.”
In those years Italy was a country looked on with some suspicion by the Western powers due to the strong influence the Communist Party used to have. There weren’t many chances for an artist as sublime, but totally eccentric and independent as Wandré to export his products, so he found himself limited to small markets like the Netherlands or South Africa, unable to develop sales in more important countries.
Another thing you have to consider is the character of this man, who wasn’t a guitarist but a true creative who simply wanted to make beautiful, unique objects, a far cry from the monotony of mass production. Wandré made a very limited number of guitars, we think around 5000 in total. Every one unique. Every one different, in terms of both looks, with different colours and nuances, and technology, with different pots and pickups. They even had different names: Selene, Doris, Piper, Tigre…
Wandré always followed his instincts and passions, for example, he was a fan of Brigitte Bardot, so he created the BB, in a whole range of colours and wood burns (!), and do things like hang the finished guitars under the glass roof of his workshop and customise them with candle smoke to give each one a totally different, nuanced finish.

In 1962, Brigitte Bardot also inspired another of his most celebrated creations, the Bikini, a weird two-piece, perhaps the first ever guitar with built-in amplifier, revolutionary to the point of attracting artists of the calibre of Frank Zappa.

But politics, society and an acute attention to actuality were also fundamental aspects of his work.

For example, when he had to produce a guitar, the celebrated Selene, for the South African market he decided to amputate, to remove a part of it, in contrast to the sinuous forms of the BB, as a protest against apartheid and the women’s rights situation in that country. It was like a metaphor for how incomplete South African society was due to its politics and culture.

Even the materials he used to make his guitars is special. The necks are made from aluminium recovered from the wrecks of aircraft shot down during World War Two, the resins and plastics all well ahead of their time. He even made the first asymmetric guitars well in advance of the kind used in the ‘seventies by prog bands like Genesis and Yes.
Another peculiarity is that in effect, Wandré wasn’t all that interested in the sound as much as the look. That’s why this collection of 140 Wandré guitars, representing the entirety of the models produced, is absolutely unique. I’m looking forward to meeting other enthusiasts at this exhibition so we can spread the word and let the world know that these are real masterpieces, whose importance surpasses the concept of cult object linked with the fame of the artist who played it, to become art objects in their own right, to all effects.

DAVID HOCKNEY - MY WINDOW
The secret garden of queens and butterflies...
ANTIQUITY IS THE ORIGIN OF OUR ERA: LEO CAILLARD at MACM
A Midsummer Night’s Dream
Have your cake and eat it!
CARLO RAMPAZZI- THE MAN WHO DECLARED WAR ON BEIGE