I haven’t had the pleasure of meeting Fabio Viale, who is one of the most intriguing artists of Italy’s contemporary art scene, but I bet he still has a childish soul, as it exudes in all of his work. Indeed, since his very first sculptures, which immediately caught the attention of the critics, we’ve seen works that conceptually awaken dormant memories in our hearts of objects the artist reinterprets in his work.

I should explain myself better: years ago at an international art fair in a hall I found myself assailed by an enormous tyre, of tractor or perhaps an excavator, one of the biggest made by man, black, shiny and aggressive with its lugs biting into the ground, but made of marble, it was the first of Fabio Viale’s sculptures I fell in love with. The emotional impact was like a lightning flash, finding myself assailed by memories of childhood games playing on a tractor, imaging new adventures, or feeling envious of a friend who owned a bigger toy car than mine. I was struck. There lies the conceptual transposition the artist intended.

His research into this hazardous voyage into the psyche of man led him to embark on a marble ship: how much envy he’s aroused!
The exhibition season of the “Little Athens of Versilia” – the nickname given to the city of Pietrasanta, a place for the creative expression of artists who come from all over the world and where many of the most internationally renowned sculptors have showcased their works — this summer hosts a large body of the works born from his boyish soul.

Who doesn’t remember their first school trips? rabbles of rowdy schoolkids dragged through museums to see awesome iridescent statues looking down on us in an attempt to communicate something of ancient truths we obviously didn’t hear, and then of how, after the customary messing around, we would fall asleep on the bus home, those statues came back in our dreams taking us on fantastic adventures among heroes and the gods of the Olympus, with ourselves in the leading roles. 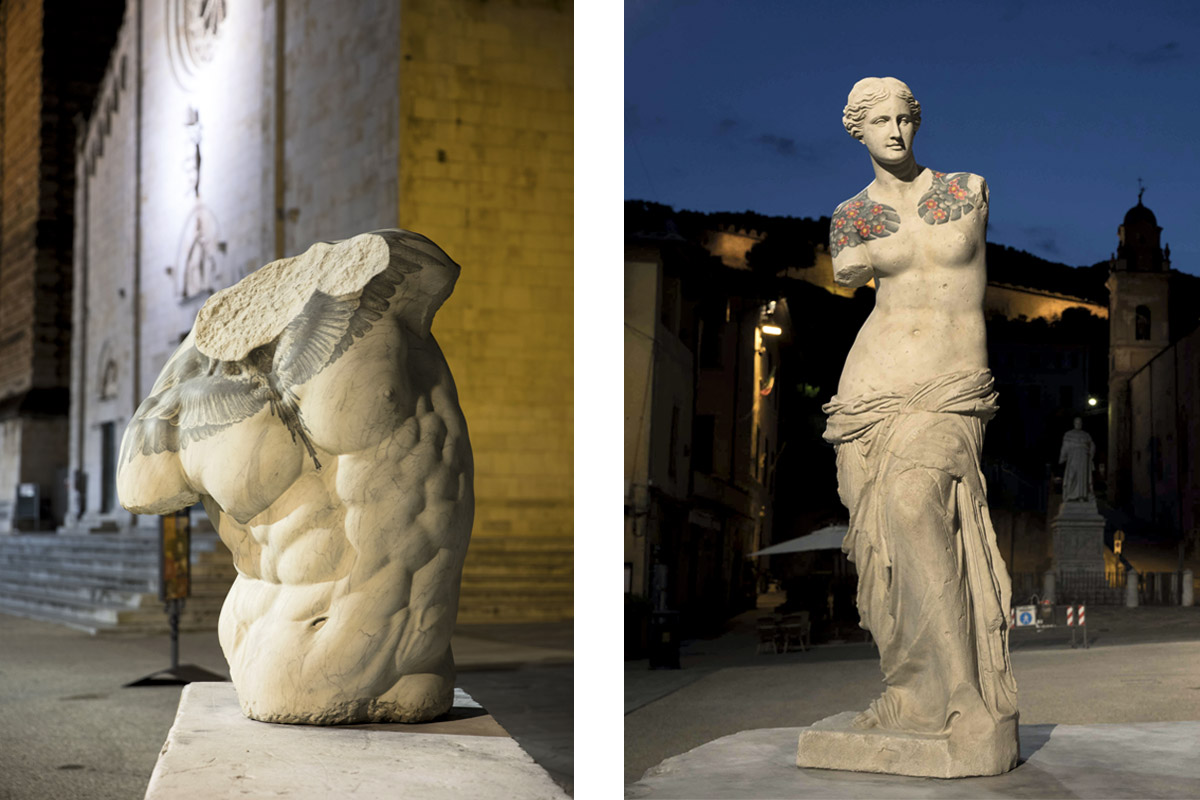 Then, after adolescence, reliving the adventures of great mariners, brave men plying the seas to discover customs both ancient and new among distant islands; who’s never dreamed, after reading Salgari or sung pirate songs… fifteen men on a dead man’s chest yo-ho-ho, or hasn’t wished for a Maori or a pirate tattoo as a way of crystallising their imaginary adventures?

This is why I believe, hoping not to be refuted by the artist himself, that Fabio Viale is one of the most prestigious of contemporary artists who keep to the rare and difficult path of conceptual sculpture which, which born of Lucio Fontana has created few and rare masters, last of whom, his friend Jannis Kounellis, recently passed away.

Entering the piazza one is meant to embark on adventures and relive dreams previously dormant but ever-present: great statues reproducing works that century-old art left as testimony thanks to great artists, yet not pure white like the originals, but an aged white — first conceptual operation of the artist — an almost dusty and time-laden shade on which he has carved, or rather, with rare skill inserted tattoos laden with culture into the sculpture, like the ancient oriental Jacuza and Triad symbols or the more recent ones of the Russian mafia — the ingenious conceptual conclusion of his creativity. Come and feel for yourself how many memories and sensations his works can arouse.

The visit to the exhibition is rounded off by a fascinating journey through the works displayed in the Church of San Agostino and its equally fascinating cloister, where many more surprises await, but I’m no spoiler!

With this show, summer in Versilia has its well-deserved pearl.

Written by Daniele Crippa in Portofino
on the day of Saint Mary Magdalene 2020.

ART IS JOY, NOT SUPERFICIALITY
Orpheus and Eurydice: the Greek myth as the guide toward an understanding of the self.
MIKHAIL BARYSHNIKOV - DANCING AWAY
HER MAJESTY- BY TASCHEN
A BRAVE NEW WORLD - CECILIA PECK AT THE "TRIBUTE TO PRINCESS GRACE"
ANTIQUITY IS THE ORIGIN OF OUR ERA: LEO CAILLARD at MACM