For the uninitiated, the MACM (Mougins Museum of Classical Art) is an Aladdin’s Cave of wonder; interspersing works of art from such renowned artists as Dalí, Renoir, Warhol, and Matisse – to name just a few – and utterly exquisite works of art from the ancient world. It is a true hidden gem. Nestled into the quaint mediaeval town of Mougins, itself with a rich artistic heritage, MACM is hosting the latest in its annual series of fascinating exhibitions: “Past is Present”, shown March 16th – 27th. There could be no other exhibition so fitting to its surroundings.

From the talented hands of Parisian artist and sculptor, Léo Caillard, comes this intriguing and thought-provoking exhibition of a modern reinterpretation of a selection of classical sculptures from the Louvre Museum in Paris. A mixture of fine art prints and sculpture, Caillard’s works are displayed amongst the house collection within MACM, perfectly complimenting the museum’s own focus upon linking the ancient with the modern.

With an aim to always surprise, Caillard first came to prominence with his series “Hipsters in Stone”, clothing classical sculptures in contemporary attire.

This theme of making modern the ancient is continued in his latest installation at King’s College London as part of their exhibition “The Classical Now!”, which brings together contemporary art in a dialogue with antiquities, a lifelong passion of MACM owner Christian Levett, who is in collaboration with King’s College.

Inspired by the imprint of the past on contemporary art, Caillard wishes the viewer to “rediscover and question our social environment”, while also making the viewer question initial assumptions having viewed his works from afar, and then discovering the many hidden layers of interpretation upon closer viewing. Having both a philosophical and scientific fascination with time, Caillard views it as a foundation of all human existence; “the way we define the past, the present, and the future, is nothing else but the experience of our own life.” 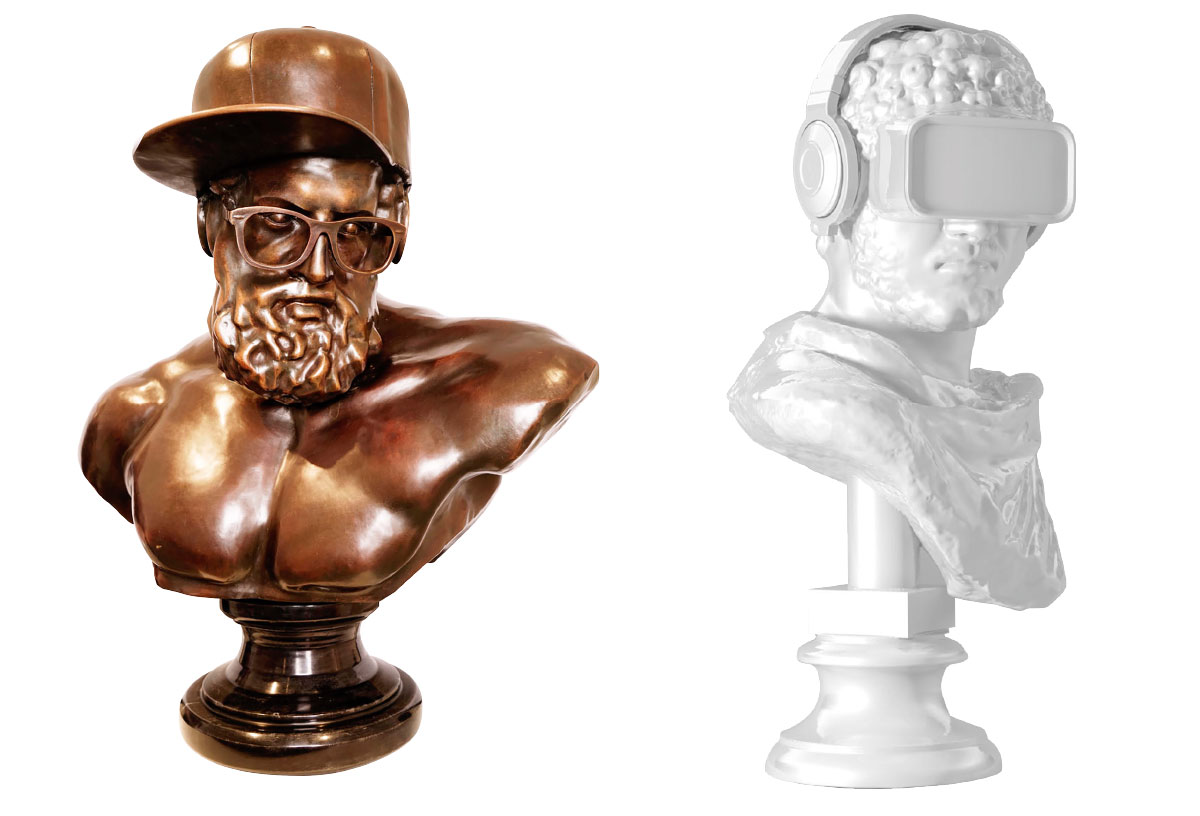 Caillard’s most recent work will be on display for the very first time in the museum, strategically placed to perfectly interact with its surroundings; a hipster Emperor Hadrian will sit amongst his contemporaries in the portrait gallery, along with a futuristic augmented reality portrait of the Emperor Caracalla, viewable only through a smart phone/tablet via Snapchat. In the Armoury – the world’s largest private collection of Graeco-Roman helmets and armour – Caillard’s “Heroes in Stone” provide a comical outlook on those legendary heroes immortalised in myth and sculpture.

For Levett, this exhibition is the latest in his close collaboration with King’s College, whose major project “Modern Classicisms” is an ongoing study of the impact the ancient world has had on the modern, with “The Classical Now!” being the culmination, on show at Bush House Arcade, and Somerset House; “the idea is to show that there is no one route between antiquity and modernity, but instead, multiple interconnections.” Indeed, King’s have commissioned Caillard to create a site-specific installation on The Strand.

“Past is Present” is on show at the Mougins Museum of Classical Art from March 16th – 27th.

FAREWELL NINO CERRUTI - INSIDE THE WARDROBE OF A LEGEND
TURNING INVESTMENT INTO AN ARTFORM
BOY GEORGE - CULTURE CHAMELEON
BECOME A MODERN MEDICI
BOCCIONI, A ROMANTIC FUTURIST?
A Midsummer Night’s Dream