Posters of an oversized cleaning lady shout out to passers-by that Queenie is here as she bashfully invites you to check her out at the Villa Paloma. Superlatives are going through your mind, questioning her right to even show her face in the beautiful Nouveau Musée National de Monaco. Indeed, the Villa Paloma had a historical family of Americans living there once upon a time, but they could have nothing to do with the bunch of Americans now squatting the place today.

You decide to take everything in stride and go up to check out the gang of intruders.  It is a sunlit day and the terrace of the impressive villa explodes in the beautiful view of the Medieval Princely palace and the Rock: absolutely breathtaking!

After entering the museum, as you mount the main staircase that takes you to the first floor. You notice with pleasure the decor with stained-glass windows, mosaics, columns, and ceiling cornices, The pristine whiteness of the room on your left beckons you to come in and you see this lone Cowboy standing dejectedly in a corner as if he has just lost his ride at the rodeo. That prize money that he was counting on will not be slapping his hand, after all! You wonder why he is in disguise and approach the guy, thinking that he’ll notice you. Then it hits you; this guy looks real, but he’s a statue.

Welcome to the world of hyperrealist, sculptor Duane Hanson. Born in 1925 in Minnesota, Duane Hanson’s works burst on the scene in the 60’s with the realistic reproduction of humans in the socio-political arena of that era.  It was around 1966 when the artist began making figural casts using fiberglass and vinyl. His first works showed figures grouped in scenes, mostly brutal and violent depictions of the times. While these earlier works had clear spatial boundaries, his later figures have so such boundaries separating them from the viewer.

In the 70’s, Hanson began his series of individual figures  – men and women – middle class or marginalized Americans, who seemed to be left out of the American Dream: racism, abuse, poverty, addiction, loneliness, facets of life, displayed movingly with respect and empathy.

You turn from your cowboy friend, and see a couple sitting at a table near the window. The photo in your museum fascicule lets you know that the man in the sculpture represents the artist himself. He is seated opposite a fat lady, and it is as if artist and model are taking a break from a few hours of hard work.  As you examine the Self-Portrait with Model, you wonder how he does it; you can even see the veins in the skin. It’s not only the sculptures that arrest your attention, but you notice the National Enquirer, iconic newspaper for middle America, and the fat lady is reading about losing weight!  Contrary to leaving nothing to  imagination, Hanson leaves everything to the imagination. The magazines, the table accessories, all add valuable fuel to the wildest scenarios of what is happening between these two characters. 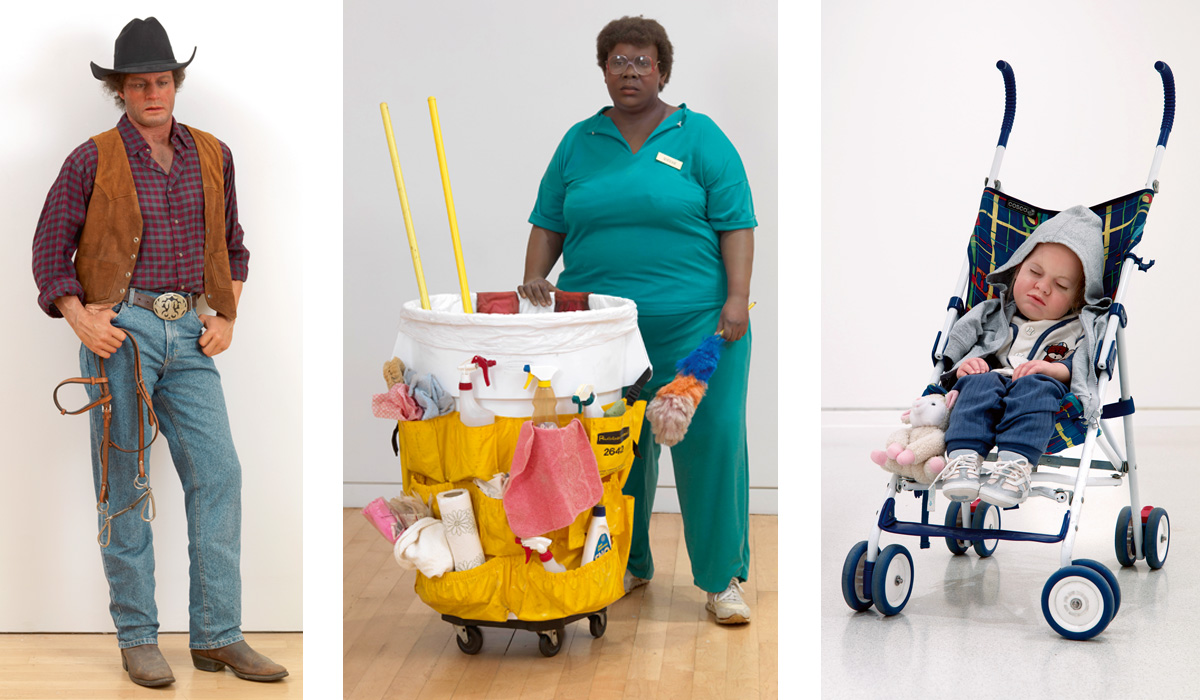 Hanson’s figures are molded in casts from live models in his studio. The sculptures are made of fiberglass and various resins, a technique that allows him to figure the details of the texture of the skin, resulting in extremely disturbing realness. The grain of the skin; the hairy arms and legs are executed in masterful detail. His sculptures are just too real to be true. His people are adorned with every attribute of life-likeness; from body hairs, varicose veins, bruises, and hangnails. He handpicks their clothes from second hand shops, and accessorizes them accordingly. Vignettes of real Americana, he doesn’t forget a single detail. Like a set on a film, Hanson designs the scene piece by piece. Nothing is taken for granted.

You want to move on, but you notice that there is a small room at the right of the Cowboy and you take a look. Someone has left a small baby in the tiny space. The baby is asleep in a stroller. Very disturbing to see this Baby in a Stroller, abandoned alone in a tiny cubicle, but it is a startling dive into the real purpose of Duane Hanson; an artist who makes you stop, look, listen and wonder at all that we take for granted. Ordinary life in all its abject loneliness. How often have we smiled at sleeping babies, unaware of their loneliness, while those who should be minding them are deeply engrossed in cell phone blah, blah, or hawking their dull lives to each other, doing everything but watching the child!

The subject matter that I like best deals with the familiar lower-class and middle-class Americans of today… the resignation, emptiness, and loneliness of their existence captures the true reality of life for these people.

The voyage through the two floors dedicated to Duane Hanson keeps us guessing as to what is real and what is not. The bronze sculpture of the Old Couple on a Bench is so inviting; your desire to sit and look into space heightens. Just to contemplate…..life!  We all envy Hanson’s Housewife (who should be arrested for indecent exposure); she provides us with the quintessential luxury of making time work while taking a break. The House Painter looks as if he would love to be somewhere else. And, whereas most of the figures wear used clothing from thrift shops, the clothes of the bronze figure, the Man on Mower, are also in bronze. Hanson wows the viewer with the details of the creases and wrinkles in the shirt and pants… absolutely unreal (you know what I mean!).

Like the Baby in a Stroller, the work on the Children Playing Game does not surprise you as much as the adult figures. The expressions on their faces are expressionless. The old adage “children should be seen and not heard” springs up and then you know….If they are children, they are definitely heard. You can’t just look at them and say “Oh, aren’t they cute?”  No, these children are not cute! How many times have you heard people yelling at children to “shut up!” When they do, they look like statues. Once again, Duane Hanson makes a statement, be it so ever innocently!

Standing in front of the Flea Market Vendor, your gaze falls on the wares that she is selling just as much as the woman, herself (who in the world reads about humanistic architecture?). The prolific profusion of literary and artistic wealth that is displayed tells you that this vendor is no ordinary brocanteuse! The book titles read like a list of the greatest monuments in the history of literature; from Goethe to Fleming, Dostoevsky, Colette (in French), Taschen Collection, Nobel Prize authors, and real paintings; all marked down at half price! Hanson pieces together his scenography in the minutest detail, asking us to really think about what we think is ordinary.

When you have viewed the rooms, the cubicles, and cubby holes, you come on Queenie II…the cleaning lady who has invited us all here to discover Duane Hanson. She is in the midst of the corridor on the second floor, with her huge garbage bin, as if to clean up the mess left by all of us who she sees leaving the premises.

There is no way that you could even try to mistake this exhibition for Tussauds Wax Museum of London or the Musée Grévin in Paris! Rien à cirer (pardon, could not resist that!). Duane Hanson transports us into the souls of ordinary humans, immortalizing them forever in the various museums and galleries that offer the world a different way of viewing others and ourselves. Let’s face it, none of us would stop to look at anyone in this cast of Americans taking up the space of the Villa Paloma. We would be too busy telling the man to stop moping on the mower and finish the lawn; the chick with the leg thrown over the arm of the chair would be yelled at to clean up the cigarette butt in the saucer; the painter should stop daydreaming and get on with the job…!

The Nouveau Musée National de Monaco at the Villa Paloma, in collaboration with the Serpentine Galleries of London, the Duane Hanson Trust and others, invites us to a very delectable cocktail; the champagne and hors-d’oeuvres provide our pallets with much more than a sip and a dip of this and that. The nine works of this masterful artist wet our appetite for the full dinner that we will not get, for the logistics of staging these few works was, in itself, a great feat.

Each work came with its own container(s), and surely Mr. Hanson would have enjoyed the artistry of how the museum officials cleverly used the  demanding dimensions of the Villa Paloma. Each work had to be viewed as a separate entity, having no relation whatsoever with another, and displayed in a manner that gives also the viewer the space needed to contemplate the work. No set instructions were given as to which work should be installed in a given space. Nonetheless, after you have viewed the entire exhibition, you could imagine that the cohesive path by which you weave through the works has been conceived by the artist himself. Is he here?

Redouble your steps and return to the first floor. The sun is still filtering through the window and lands on the statue of Duane Hanson and his model, seated at the table. You can see the selfie of the couple against the backdrop of the Monaco postcard. The surreal scene of the self-portrait of the artist against the background of the fortressed Rock of the princely palace tells the whole story. Yes, the undeniable presence of the artist is here, presiding over the motley group of Americans that currently inhabit this gorgeous villa.

Once again, the cultural and artistic forces of the Principality have served its denizens un plat de résistance, introducing us to one of the world’s most prodigious artists of the 20th Century. Duane Hanson left the earth in 1996, but his works remind us of the virtual reality of our own physical selves, in relation to our surroundings and to others. The exhibition might seem small, but it is extremely BIG! 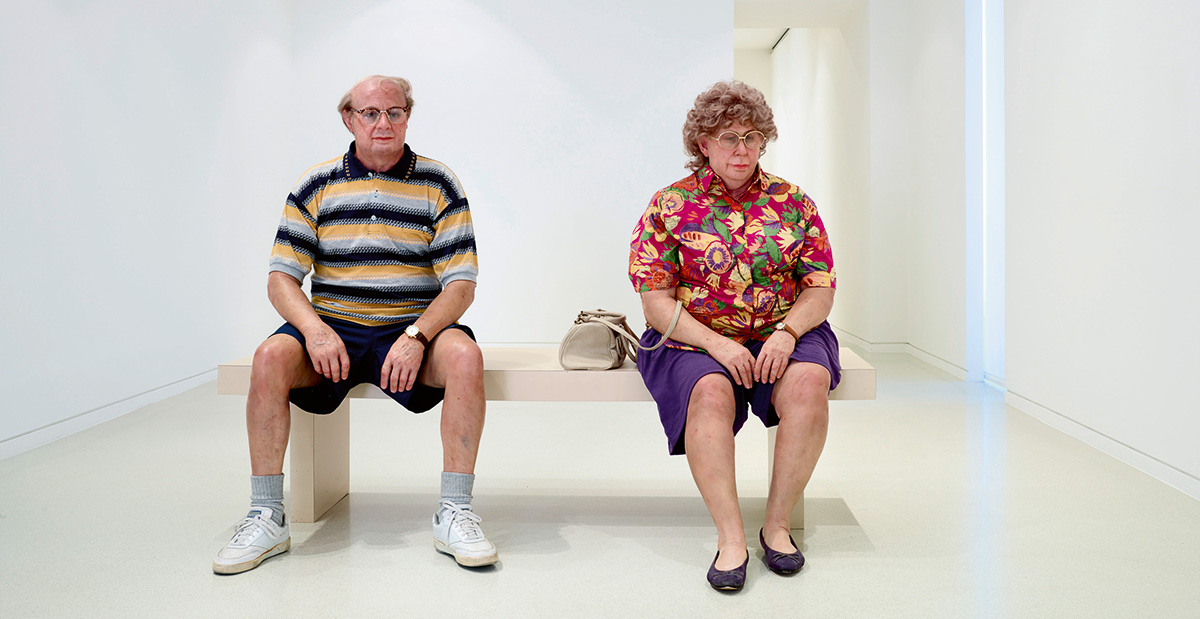 Duane Hanson has given us characters that we could converse with all day long, discovering new stories in their lives. It’s funny,  and like magic you even imagine yourself as a work of art in an everyday fantasy of your own world. The artist wanted us to see how we can improve on life as we live it and see it. Taking a long look at these ordinary folk should help us to take a long look at ourselves. Does it?

By means of television, books, magazines and newspapers, we are constantly bombarded with all kinds of visual material, mostly concerning humans, so that we hardly really see anything anymore – especially the essence of the human in its exalted or degraded condition. It’s my purpose to permit viewers of my work to see the world as it is and in so doing, perhaps also seek ways to improve it.

As you leave the magnificent edifice, strolling through the terraced Italianate gardens, you cannot resist the sounds of the last chords of Living in America sung by James Brown, ringing in your head. And once in the streets, you pass – unnoticing – the ordinary people that you see every day.