Can an artist encapsulate the spirit of all artists, of all epochs, in his own work? In theory, yes: there’s a common thread that links all human beings who dedicate their lives to art, and every artist studies, is inspired by, influenced somehow by those who went before them through the centuries, as well as by their contemporaries. Sounds perfectly normal.

Then there are certain artists in whom this process is blatantly manifest. Even while managing to express their own, highly recognisable style, it is as if the soul of all the other artists and sculptors flowed into their work, creating an ongoing visual dialogue between different souls and different epochs. That’s where the miracle happens: creations that belong to the artist, but that are at the same time children – legitimate children – of all the others. In Manolo Valdés, Valencian artist class of 1942, this is perhaps more evident than in any other. In the particular epoch Valdés spent his formative years and began his artistic journey – that of Francoist Spain – freedom of expression wasn’t just pursued in the creative sense, but in the literal sense as well. In that period, the oppressive power of the regime was opposed only by a single force from beyond its borders, the explosive power of Pop Art. And Valdés was able to draw copiously on classical Spanish culture – Goya and Velázquez – revolutionising it, serialising it and elevating it to a new dimension, “freeing” it somehow from its own history. 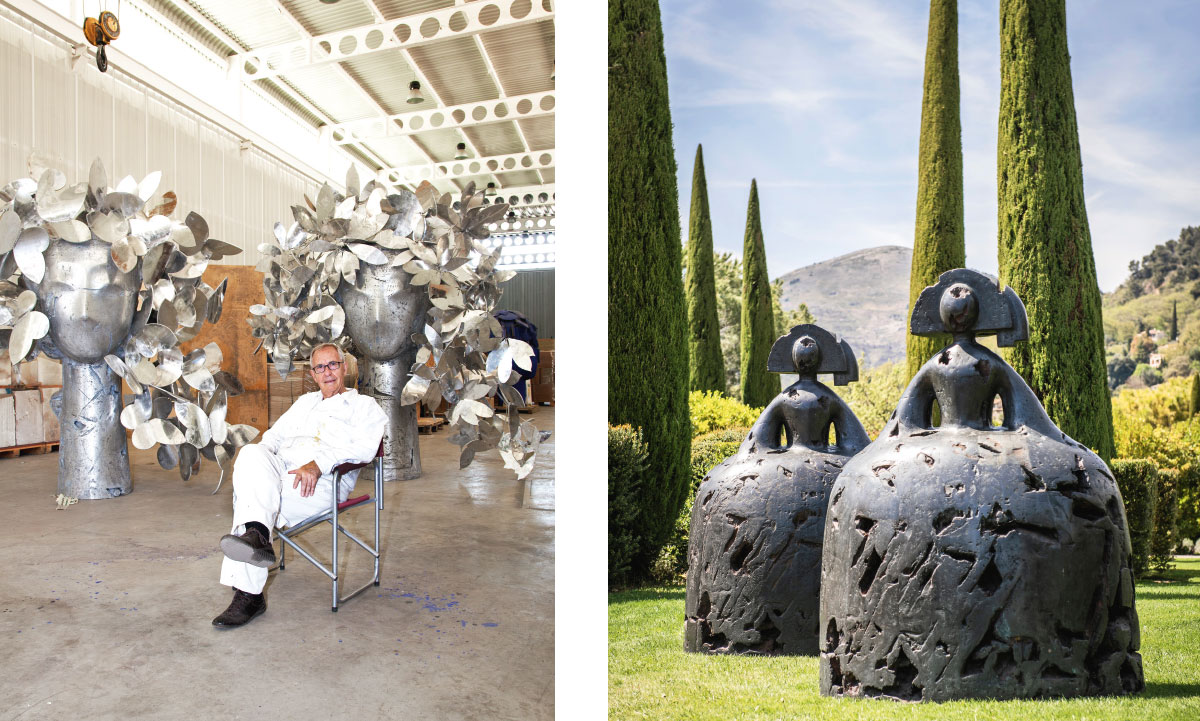 The commingling of styles, techniques and relentless research, coupled with freedom of thought, are the salient features of the artist’s journey into our times. Freedom of the artist, but also, and above all, of the observer. In the artist’s opinion, there’s no user guide to his art, nor is one explanation more valid than another. You just have to give free rein to your sensitivity. Hence his detached silence and his refusal to provide any kind of theoretical justification. His message should be clear between the lines – in the silence of the colours, the mute materials and the impassive presence of the works – an ode to concentration, labour, energy, enchantment; a refusal of every kind of banality. Deeply rooted in Spanish culture and history, today Valdés work has acquired an international dimension, especially through his large-scale sculptures. Valdés often reproduces the same subject in different materials and on different scales, from oil painting to bronze and alabaster…

His sources of inspiration seem to be equally varied, sculptures like “La Pamela”, that could come straight from a Philip Treacy design, or the “Reina Mariana”, a daughter of Velázquez. And again, the sensational “Palomas”, in all her declinations: an explosion of femininity, frivolity and fantasy mixed with openness, sensuality and love in the portrayal of a face almost without line, mouth or expression, and that couldn’t be other than the face of a sister of one of Modigliani’s women. Indeed, women do seem to be the absolute centre of Valdés’ attention. A focus that goes almost unnoticed, but when you do notice you realise it is not a deliberate choice. In effect, it isn’t even a choice, it just happened.

Valdés is one of the greatest contemporary artists, an artist not afraid of stepping off the beaten track, getting his hands dirty, never trying to make his sculptures shiny like a big mylar puppy balloon to dazzle the art market and rise to pop star status. Valdés is real pop, he simply doesn’t need to needlessly stupefy, because just looking at a Valdés sculpture you’re simultaneously immersed in Baroque, fashion and pop. Each individual Valdés sculpture is a compendium of the history of art. To be kept preferably in the gardens of a castle.

CHATEAU SAINT MARTIN: Nestled in the hills of the Var, in the heart of the French Riviera, the Chateau St Martin is one of the nine pearls of the Oetker Collection. A member of Leading Hotels of the World, the Chateau is a magical venue, where art traditionally occupies a very important place: every year the gardens and the entrance host an exhibition of large-scale works, personally chosen by the family, which contribute to making the experience of your stay truly unique.