The brand represents the prowess of a sartorial tradition that sinks its roots in an extraordinary know-how made of history, territory, courage, Made in Italy and passion for quality. These are the features that have made Lardini into one of the most important clothing companies both at home and abroad.

The exclusive dimension: the ongoing experimentation of materials and volumes. Futuristic technology, refined craftsmanship, flair. All this defines the world of true tailoring, and Lardini, pride and joy of Made in Italy, is certainly the maestro in the choice of elegant, fluid fabrics, in the concept of personalising every jacket with masterly details, transforming them into virtual works of art. But it’s also a cheeky, rebellious company with a taste for breaking the rules of the market, breaking old patterns, and above all with the desire to have people wear each item “in exactly their own way”. Elegant but informal, it translates and interprets the Italian sartorial style with decisive, contemporary taste.

Today at its 40th anniversary, with a limited edition collection this Filottrano based company takes the codes of tailoring beyond their confines in a far more “communicative” language. Then again, after the elegant collection inspired on the Cote d’Azur and the illustrations of Renè Gruau, Lardini has been continually experimenting with new creativity, looking toward a new international style. 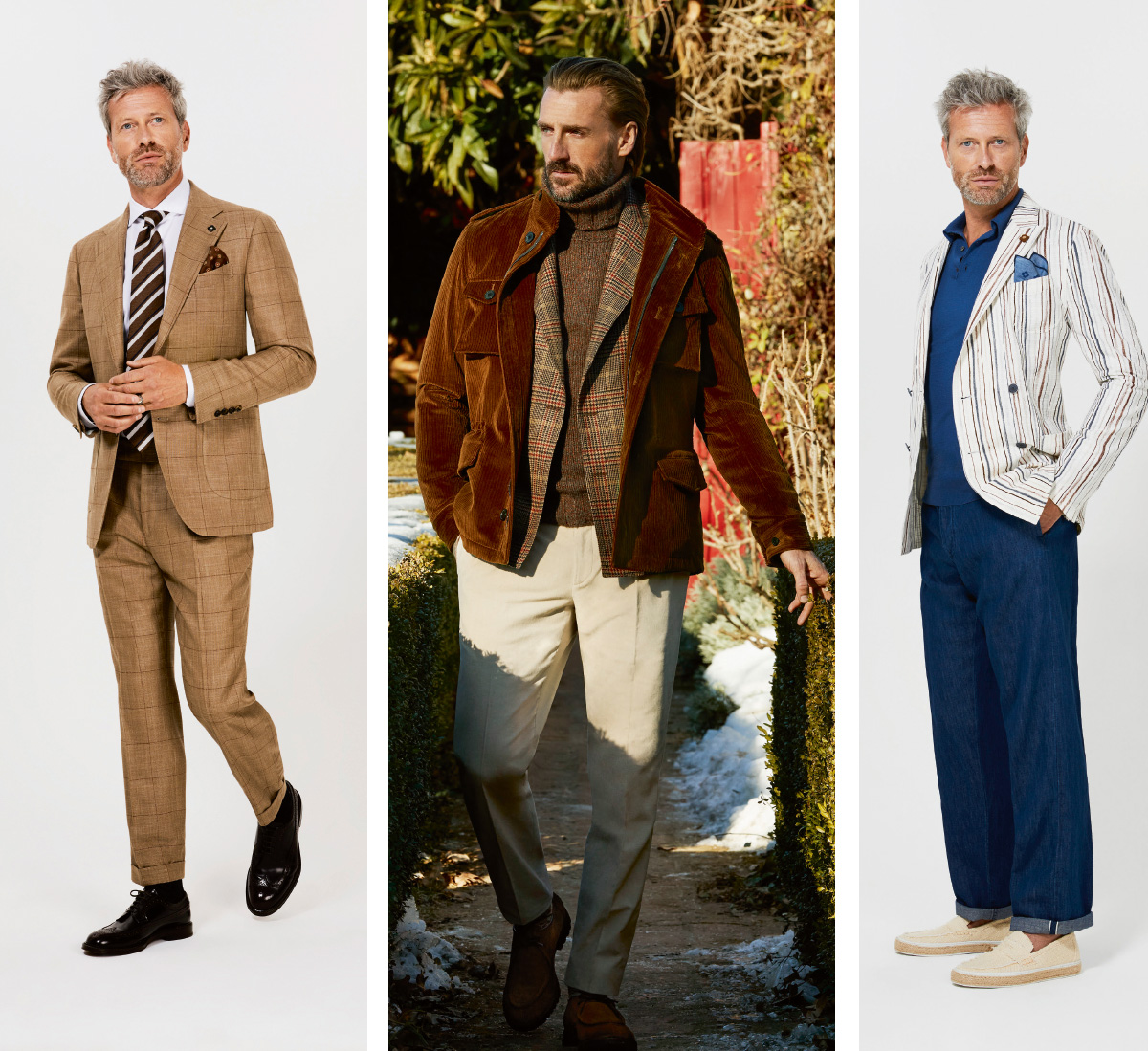 “Proposing my designs to a public with a passion for my work has always been a pleasure” affirms creative director Luigi Lardini, “ever since I looked out at the panorama that extends beyond the confines of these beautiful valleys, imagining my first men’s collection, and began to give form to the vision of my eighteen year-old self, long before the term start-up was even invented, thanks to an investment from my father and the help of my big brother and sister: Andrea, a computer engineer and now chairman of the company, and Lorena, now the Chief Financial Officer. A trio that would soon to be joined by our little sister Annarita, who’s dedicated to controlling the quality of every item that leaves the factory”.

And to this day that same factory with 450 employees produces around 2 thousand of them every 24 hours, generating a turnover of 73 million in 2017 with forecasts for 2018 of around 90. Numbers that tell the story of a project born from the enthusiasm and sheer cheek of a young man, now transformed into a mature reality this year celebrating the Heritage of its past.

On the 19th of September, the official anniversary date, two limited edition jackets arrived in the stores throughout the world, both in the institutional colour of the brand, blue.  Uniting them, the flower, the Lardini symbol normally worn at the buttonhole and that here we find all over the two blazers. While one is knitted in wool terry fabric, capable of giving a certain three-dimensionality to the petals, the other is formed from an exclusive wool and worsted jacquard, giving it an almost embossed effect. Numbered pieces, appearing in the shop windows under demilitarised pea-coats, parkas and duffle coats in cashmere, mohair, alpaca and Solaro, embellished with bone buttons, linings in Viyella shirting and half-belts. A wardrobe for the coming winter enriched by unusual textures like woold, a blend of wool and Shetland, and mowear, a combination of twisted woollen yarn and stretch viscose giving a consistence almost akin to jersey but waterproof and with that casual elegance of the Gentry, the noble folk of the English countryside.

Elegance marbled with divertissement, attention to detail, fabrics, and creative freedom of the kind that makes the creative director himself exclaim “I made no compromises and had a lot of fun doing it”.

But above and beyond the seasonality and the due festivities, the company has its head firmly in the future. The new era for the brand will certainly be the second generation of house Lardini, born and raised in the corridors of the company. An education both sentimental and professional that has prepared them for the future to come. For some of them, like Brenna, the company’s public relations manager, it was simply chance. “At the start I had other ideas entirely: I took a degree in Oriental studies in Florence, fascinated as I was by the culture of Japan. Then four years ago I decided to move into the company press office: in reality I had spent most of my time poring over books. Working in communications, describing to others where I was coming from, in terms of brand and sense of family, was a real challenge, but the dynamism behind this company has opened doors to the world I would never have expected.” 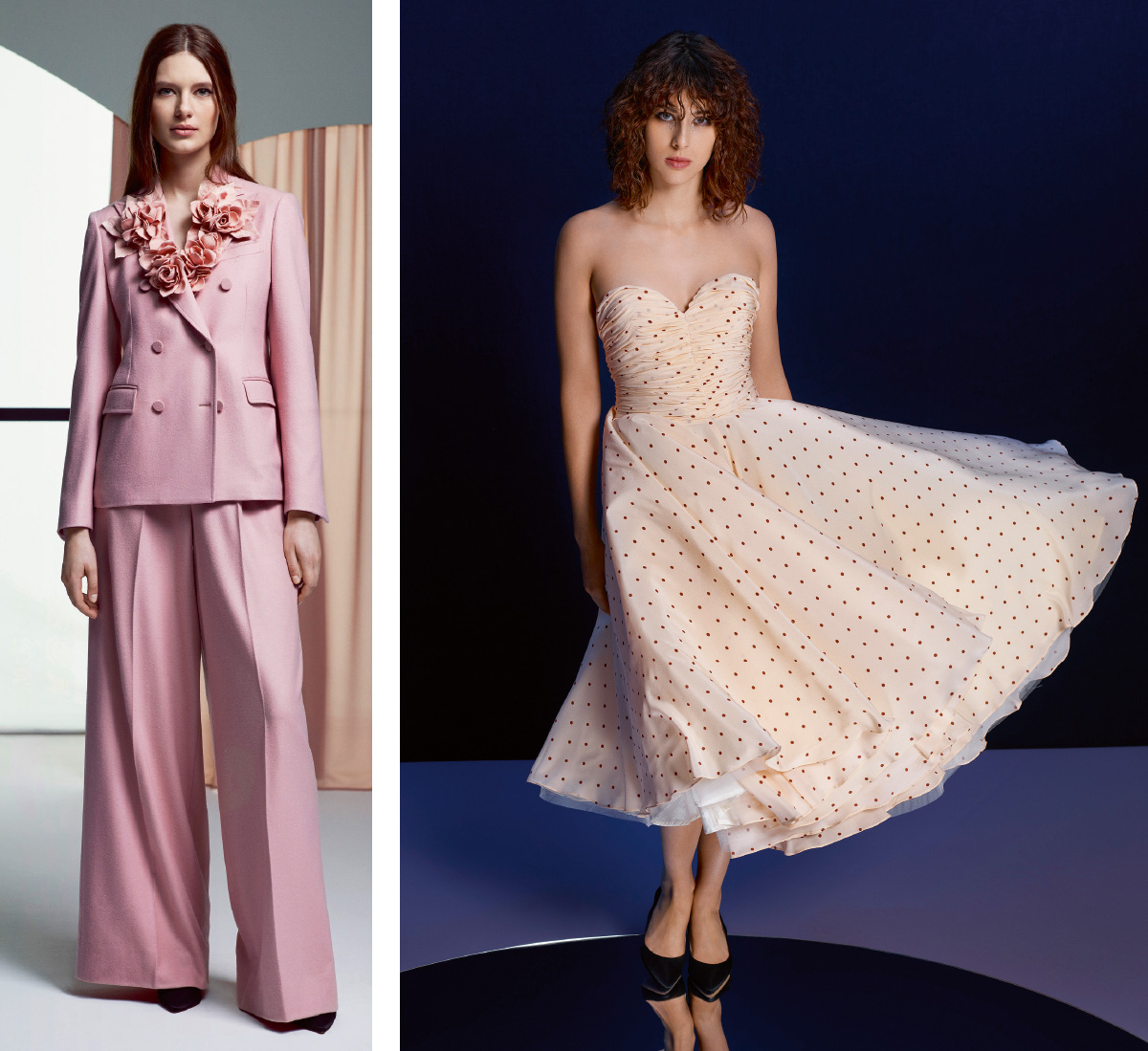 For Genea, tasked with moulding the aesthetic of the Lardini woman, her DNA simply left her no choice. “I studied painting at the Florence academy of fine art. My career seemed to have no connection with the company. But then, as I grew older, I realised I’d inherited certain predilections and tastes. So now my ambition is to mould the aesthetic of the Lardini woman, born later as the independent companion to the men’s lines.”

There lies the power of the company, destined in future to Alessio, at present working in the Lardini style office. “I, too, studied art, like my mother, but I think this creative aptitude runs in the whole family. Sure, in my case the guidance of my uncle Luigi was fundamental: a certain idea of elegance, a particular conception of beauty that almost involuntarily made me the way I am.”

A fundamental role is also played by teamwork, which if in the case of the first generation was aided by strong blood ties, now is built on the basis of common interests, passions on which to forge understandings that are then transferred into the work, as in the case of Alberto Santolini, who followed in the footsteps of his mother Annarita, taking responsibility for technical service and machinery. “As a child I often followed the work of my mother, and later I worked with another Filottrano based company specialised in textile machinery repair. Mine is a job that demands precision, and my mother certainly taught me that.”

Ambitions and results looked upon by those who went before with the tenderness of parents and the experience of seasoned company men (and women). The rest is the story of everyday life, to be written in another forty years by the third generation.