STAN LEE, whose passing on November 12th 2018 will be mourned by millions, was the embodiment of an old-fashioned American archetype: the likeable, industrious hustler, whose enthusiasm for self-advancement was uncorrupted by callousness or cynicism. He was an entrepreneur and an opportunist, a showman, a creative dynamo, and a visionary. More than any other individual, he was responsible for turning the comic book, a low-rent pulp art form, into a pop-culture powerhouse. 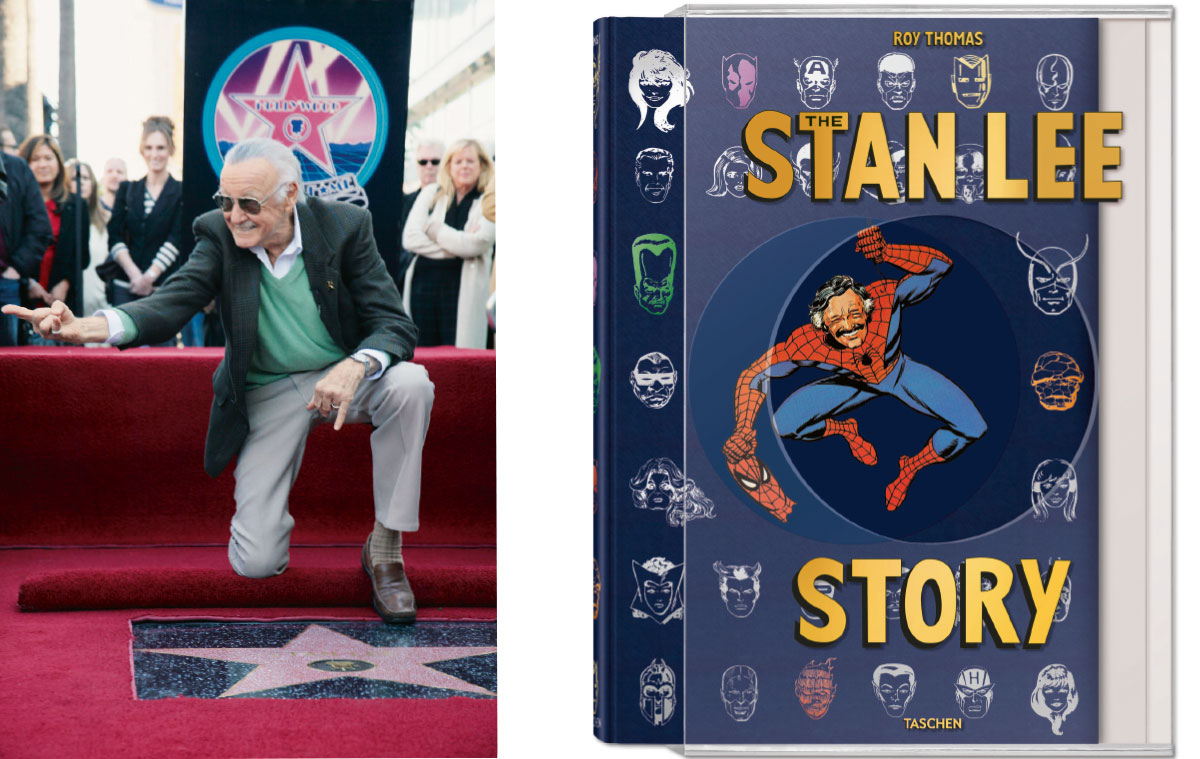 In January 2011, a week after his 88th birthday, Stan received the honor of becoming the 2,428th star on the Hollywood Walk of Fame. Six years later, he returned to add his hand and footprints to the forecourt of the Chinese Theatre – an even more prestigious accolade. // The Stan Lee Story is a Collector’s Edition of 1,000 numbered copies, each signed by Stan Lee, printed on archival paper and presented in an acrylic slipcase. The cover features John Romita Sr.’s 1977 homage to the co-creator of Spider-Man.

I’ll never forget the first time I laid eyes on a Marvel comic back in the early ‘sixties. Life was still very much in black and white in Liverpool those days and the only comics we could get were British classics like the Dandy, the Beano or Whizzer and Chips. Comics from America were pretty rare seeing as they weren’t widely distributed in the UK, but I had a mate next door with an uncle in Detroit who one day came to visit bearing gifts, which included a pile of old (even in those days!) Marvel comics. Starved of colour, glossy covers and new stories they were a revelation. We literally devoured them, reading them over and over again, fondling the covers, sniffing the print until they literally fell apart. Which is kind of a shame, because if we still had them, those early numbers from the sixties, not even in perfect condition, they’d be worth an absolute fortune and I wouldn’t need a pension. You don’t know what you’ve got ‘til it’s gone, as they say!

Stan’s humble bicycle was, in his mind, a “twowheeled spaceship” that flew him across the universe that was New York City, ca. 1930s. // Stan lounges on the hood of his 1936 Plymouth sedan, his first car. After enlisting in the U.S. Army in 1942, Stan was tasked with writing instructional manuals, slogans, and scripts for training films as a member of the Signal Corps. // In a promotional photo, ca. 1968, Stan is surrounded by some of the most popular Marvel comics. The first half of 1968 saw the company expand to an astonishing 19 ongoing titles. Marvel was no longer a comics publisher “on the move”…it had arrived.

Stan and Joan take a joyride with the top down. Things at Marvel were looking ever more secure and the future looked inviting out on the horizon. The Lees gave TASCHEN access to their family photo archive, allowing for the publication of many personal photos that have never been published before. // Stan was a man in demand, appearing on TV shows (Tomorrow with Tom Snyder, The Dick Cavett Show, and To Tell the Truth, among others), college campuses, and many radio programs.  He had achieved celebrity alongside his creations, and it seemed to agree with him!

A few years later Stan Lee became the voice of my childhood as I sat transfixed by Spider-man cartoons on the TV every Saturday morning. His energetic narration welcomed me to the story, made me feel part of the gang. It didn’t matter that the animation wasn’t up to much. It looked like a comic, had a great theme tune, and Stan “The Man” Lee, my buddy, was giving it his personal seal of approval. Fantastic heroes, fantastic story-lines, Stan Lee’s vision came from a time when we thought we knew right from wrong and all it took was a Spiderman, a Hulk, and Iron Man, or even Captain America himself to put the world to rights when the bad guys tried to take over and PC hadn’t been invented yet (PC as in political correctness). Famously, Lee originally honed this warm persona in print. The words “Stan Lee Presents” in the Marvel comics I was also feverishly devouring – black and white British reprints of the American originals – were a guarantee of quality. When he signed off a letters page or editorial with his trademark “Excelsior!” I never failed to smile. I was, and remain in many respects, a “True Believer”, as Lee called all dedicated Marvel readers.

The cover of Amazing Fantasy No. 15 (August 1962) — featuring as iconic an image of Spider-Man as there may ever be — has been paid homage countless times in the several decadesz since its publication. Artwork by Jack Kirby (penciler) and Steve Ditko (inker) who cocreated the much-loved character with Stan Lee. // The first issue of Stan Lee and Jack Kirby’s Fantastic Four hit newsstands in early August of 1961. The Marvel super hero era began with the Fantastic Four and in the ensuing years grew by Hulk-like leaps and bounds. // The first issue of The X-Men (September 1963), with a cover by Jack Kirby and Sol Brodsky. The initial title for the series, The Mutants, was rejected by publisher Martin Goodman, so Stan went back to the drawing board saying: “…an extra power, extra ability, some extra facet or quality denied a normal man. The word extra was the key. Mutants are, in a sense, people with something extra.” Thus The X-Men were born. // “Didja know the real reason we changed the AVENGERS lineup?…Iron Man, Thor, and Giant-Man were all starring in their own mags. After a while, it didn’t seem right to have one of them captured in Transylvania in his own mag, while he might be taking in the Late Show on TV in the AVENGERS! The truth is, it seemed to kill all the realism – all the immediacy of both strips! – Stan Lee

When I learned about the history of Marvel Comics later in life, I realised that things were not always as they seemed. The angst in those Spider-Man and Hulk comics wasn’t all on the page; like any business, there were tensions and rivalries behind the scenes. That’s another story in itself, but nevertheless Stan even in his final days still managed to get his true message across when he said “Marvel has and always will be reflection of the world outside our window…..our stories have room for everyone,  regardless of their race, gender, religion or colour of their skin. The only things we don’t have room for are hatred, intolerance and bigotry”.

Then along came the Hollywood success and the rest is history, but the part I enjoy best in every single Avengers film is waiting for the Easter egg: that superb Stan Lee cameo…

Now for all “True believers” Taschen books, famous for its giant-size format art books, has produced this unparalleled account of the life and times of Stan “the Man” Lee, the Marvel Universe he built, and the creative passion that has led him to pursuits beyond his earliest imaginings. Includes never-before-seen photographs, original comic art, and rare comic book facsimiles to trace Stan’s dizzying career and his unstoppable influence on pop culture worldwide.

The Collector’s Edition, just 1,000 numbered copies, each signed by Stan Lee is a sure-fire investment, destined to appreciate. Rather like all those Marvel comics I didn’t realise were so valuable when I was a kid. What more can I say but…. Excelsior!!!!!