The iconic French trunk-maker, established in 1834, put in persepctive with our times and our lifestyles, for a relaunch in grand style.

Change perspective, get into the game and breathe, scrutinising your horizons. Get a precise point of view, built on couture and the one-of-a-kind approach. This is the departure point for the new adventure of the venerable French luggage maker Au Départ, established in 1834 and this year reborn at the Milan International Furniture Fair from the magnificent complicity of Dimore Studio, Emiliano Salci and Britt Moran. The presentation at the Fairs was a narration on three levels, transforming into a tribute to the origins of the brand, but also represents something of a payback for the closure of the company back in 1976. In the words of DimoreStudio, “Au Départ has been serving men and women for grand part of the eighteen and nineteen-hundreds, in a dimension inclusive and appreciated right from the outset, and for this we’ve chosen six period trunks and translated them into a new language, where the terms of interpretation multiply and intertwine in a play of surprising, cultured references.” Au Départ was originally a trunk-maker: the name came from the location of the first shop, right in front of Paris’ Gare du Nord, which was inaugurated just a year later. The shop offered its customers a new concept of luxury, made of refinement and elegance, but modernity and technology as well. And a touch of humour. Turning “custom orders” into a new standard, Au Départ builds trunks to meet any kind of demand, even the most extravagant. Always with impeccable formal quality. 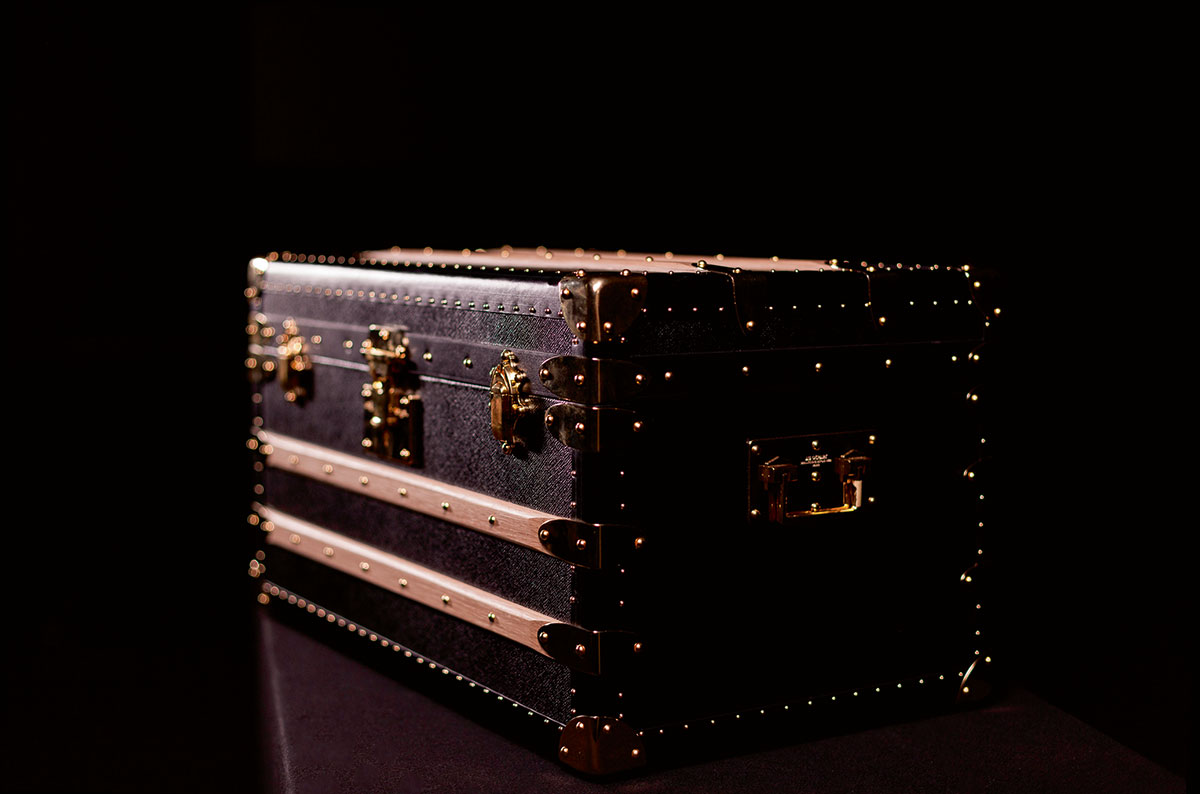 In 1871 the company was taken over by brothers Ernest and Paul Bertin, who just three years later, in 1874, opened a second shop in Avenue de l’Opéra, the place that was rapidly becoming the epicentre of Parisian elegance, with its cafes and new department stores destined to become legend. And at the centre of it all, the monumental Palais Garnier, triumphantly inaugurated the next year. Thanks to a series of inventions and patents (for trunk manufacture and the perfect waterproofing of the leather) business was going from strength to strength. The apex of success came with the advent of the roaring ‘twenties, when Au Départ was synonym of luxury and style, and artist Yan Bernard Dyl was doing the advertising. An image that still makes an impression for its modernity: the actual logo of the Maison is inspired precisely on the one designed by Dyl.

With this Heritage, this creative collision-become-mantra extending to our times, DimoreStudio transposes details and design concepts into a simple play on visions, in a narrative that fragments, resumes and reaches new depths, redesigning the confines of travel and its accessories, far from the stereotypes and old containers, that take on a new, contemporary lifestyle, in which mobility is a statement of fact. In this way we manage to acquire on one hand tradition, with all of its interior renewals, and on the other innovation, with its implicit constants; classicism on one side, modernism on the other. We have to bear in mind that contemporary society needs this kind of dialogue, insomuch as it works, at least since the birth of fashion, to extend it to all fields of art, in an infinite variety of forms; and if it explodes today into fashion or design, it’s because fashion, too, is an art, on a par with literature, painting and music. Above all, the match between Au Départ and Dimorestudio teaches and confirms: today, thanks to formidable developments in distribution systems, fashion is not simply what people purchase or pick for the homes; it’s also what people read and watch: the inventions of our designers delight or irritate exactly in the same was as a novel, a film or a piece of music. Onto Au Départ’s trunks and Dimorestudio’s designs we project the entire phenomenon of belief, prejudice, sentiment and resistance, in short, all the history of ourselves that is, in perhaps too simple words – the taste of refined elegance.