It isn’t surprising that Kevin Richardson is more commonly known as “The Lion Whisperer”. A quick Google of his name and videos of him kissing, hugging and putting his hand (!) in lions’ mouths pop up. His natural affinity with these incredible animals, as well as hyenas, cheetahs and leopards has seen him open the Kevin Richardson Wildlife Sanctuary in Pretoria, South Africa. Intently focusing on conservation work, he is often used as an expert for photographers such as David Yarrow to capture incredible images, all in the name of art aiding conservation conversations.

F.1.M. : Let’s start by saying I’m a big fan of your work, especially your work with hyenas. You really seem to create a stable bond with animals that seem to be to be particularly tricky!

K.R. : They certainly are tricky animals! If I can get you to like hyenas, which aren’t the most noble of looking creatures, it means I’m doing my job right. People need to like hyenas!

F.1.M. : Your everyday life is something that would terrify most of us. Are you more worried about your own safety, or the safety of the wildlife?

K.R. : I’ve been working with large predators for over two decades, so I’ve certainly learnt a few lessons along the way. I’ve definitely learned what to do and what not to do. So I understand when somebody asks me are you worried about your life and the answer would be no, because otherwise I wouldn’t be doing it. But do I understand the hazards of working with big cats and hyenas and leopards.

I think the relationships I have are really important for getting a message out to the world as just how dire a situation a lot of the iconic species on the planet find themselves in. When you spoke with David (Yarrow) about what was the biggest threat, he touched upon many things which I agree with. But I’ll steal a phrase from the Senegalese forestry engineer named Baba Dioum: “In the end, humans will only protect what they love, love what they understand, and understand what they are taught”. Apply that to anything, and it works.

So if I can get people to fall in love with hyenas I’m one step in the right direction, to getting money, to getting support, but if no one loves hyenas enough to protect them hyenas would go extinct. Extrapolate that to lions… The world has so many issues that whoever’s screaming the loudest is getting the attention: the rhino, the elephant, the poaching of ivory, melting ice caps and the plight of polar bears; but no one is talking about the lion! Even when the Lion King movie was released, there was just a little bit on the side about “oh, by the way, the lion population is in peril.” If we don’t do something radical, they’ll be gone by 2050. There are only fifteen thousand or so lions left in Africa. So we have a ticking time bomb and we have to do something about it.

My job is to create awareness, talking to you so that you can write it in your magazine and people can read and go wow, I never knew that! All I need is for one person in Monaco to say I really love lions and would hate to see them go and take some action. 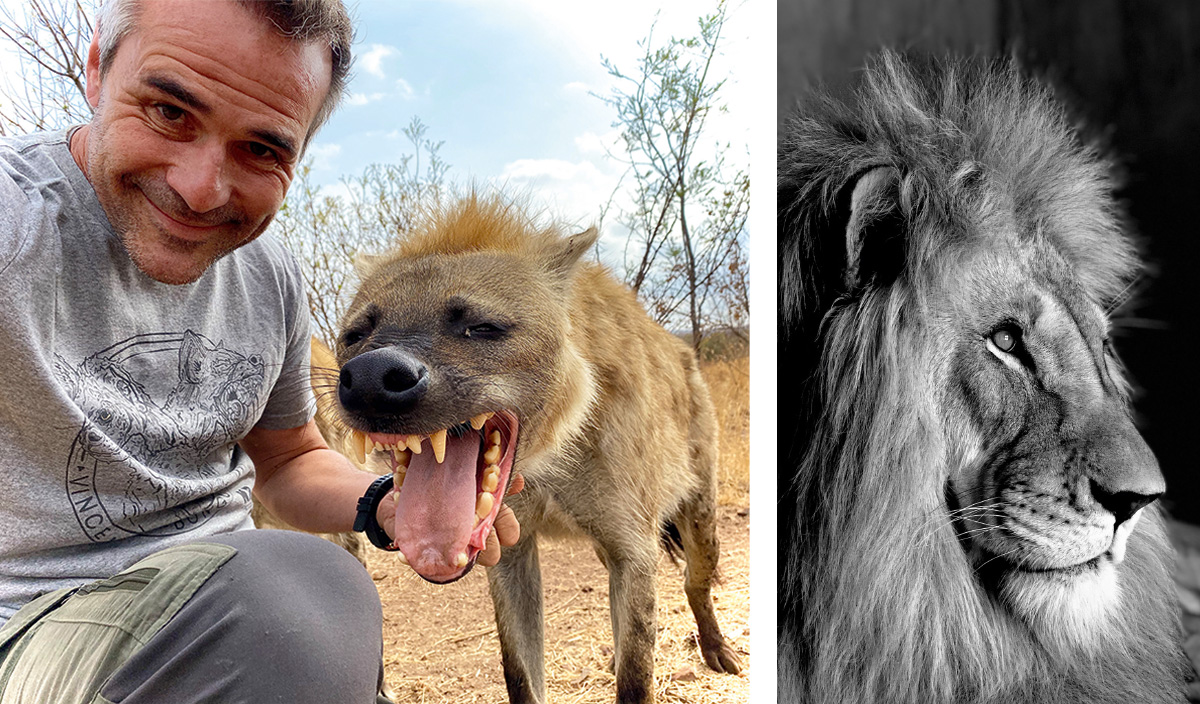 F.1.M. : I really didn’t realise that lions were endangered to that extent. We see them in zoos around the world, on safari, on television…

K.R. : Exactly! And there lies another problem: when we come to certain countries we see lions in captivity and so we assume there’s a lot of them. If lions die out in the wild we just take them out of captivity and put them back, but it’s not that simple.

F.1.M. : When you travel the world to meet influential people, doing conferences and giving speeches, what is the ratio between supportive words making a real commitment to help? Is this changing? Is it improving? Is the situation getting any better?

K.R. : That’s a really good question. We are we seeing something of a shift towards people understanding the message and saying “ooh we want to do something” and not just lip service. I find there is a new awareness around the globe, a consciousness that’s growing. People are wanting to be greener: no more plastic straws, no more plastic bags, we want to protect the oceans… but how many people actively contribute? It’s a small percentage currently, but I think things are starting to pick up. But things like this, collaborating with people like David Yarrow, is really important. The kind of contribution he makes with his fine art photography and luxury brand makes a tangible difference. That’s when I get involved.

F.1.M. : The last question is the same as the one I asked David: what’s the first thing we have to do to improve the actual situation?

K.R. : Apart from what I said about buying habitats, I want to point out the problem of the growing human population. We can’t go on saying we can’t change it and we can’t do anything about it. We can do something about it!  We just have to recognise the fact that now it’s become imperative. And we should never stop explaining, showing people the reality; it’s a daily battle, a constant fight and constant persuasion, like teaching children. Starting out with basic concepts and moving on towards more complex explanations. The most important thing in the world is to make people love the world!

If we loved the planet we wouldn’t treat it the way we do. It’s a hard message to get across, but I hope that I’m playing my part.