Saudi Arabia’s art is sending out a message, both of opening and modern recycling art.

Art is sign of openness, self expression, inspiration and unlimited thoughts. As a Saudi Arabian woman, that’s what Shalimar Sharabatly is trying to spread and the message she’s trying to deliver on the occasion of the Kingdom’s 90th National Day celebrations.

The municipality of Jeddah, in cooperation with the artist, has launched the “Draw the Nation” initiative, which will see the art displayed to the public from Sept. 23. Sharabatly is known for her style of painting on cars especially with the hand-painted Porsche 911 and a Formula 1 racing vehicle known as “La Torq”. The Porsche was showcased at the Paris Motor Show, and “La Torq” was unveiled at the 2017 Grand Prix de Monaco. Both vehicles were also exhibited at the Louvre museum in Paris, in the “Moving Art” exhibit in 2017.

With her talent, confidence, strong personality and feminine touch, Sharabatly was commissioned to paint four old cars in order to display them at the new waterfront and Jeddah’s main squares. Representing the Kingdom for the National Day celebrations means a lot to the artist, both on a patriotic and artistic aspect.

She grew up in an artistic, musical and blooming environment, since her mother used to have an art studio and made her daughter grow up in a very unique way comparing to the other children, with the sound of Fairuz, Abdel Halim (Hafez) and Julio Iglesias.

Shalimar had all the resources from her mother to nourish this strength and energy she has today. From the age of 6 she developed her skills and won her first award at the age of 8. At 16 years old, she had her first show in Cairo in 1988. Fans of her early career include renowned Egyptian painter, Salah Taher, and the poet, Farouk Juwaidah, who attended the show and complimented her work. She has showcased her work internationally, and recognized as the first Saudi female artist to be commissioned by the government to create artwork, and in 2017 was chosen as a goodwill ambassador for her contributions to humanitarian issues and civil society.

Shalimar is covering many aspects and causes through her paintings, she’s speaking for the artistic, humanitarian, environmental aspect by supporting recycling with the paintings on the old cars, modern middle eastern woman as well as the national and patriotic aspect of the event that shows her attach to her country of origin. She felt honoured to be participating and giving back to the country in the best way she knew how.

Though Sharbatly finds painting cars to be a challenging experience, she also finds it very rewarding.
“It’s very difficult to paint on to cars. You’re almost at war with the paints, because they tend to dry out very quickly. But I’ve grown accustomed to it after so many years. I used to say that the paints would wound me when I fought with them, but now I have tamed them so that they listen to me,” she said.

“Experience makes you innovative, and innovation makes you creative, and creativity is what makes the world around you easier to mould to your will,” she said.

“In these current circumstances, with the coronavirus pandemic happening and our government stepping up to offer treatment to everyone and keep us all safe, our nation needs a lot from us right now. I can tolerate the heat and the difficulty of the work if it means I can contribute to beautifying the country as much as I can,” she said.

She also expressed her gratitude to the mayor of Jeddah, Saleh Al-Turki, for supporting the initiative, and for providing the old cars and vehicles to be turned into artworks.

The initiative will start from Jeddah’s waterfront, where the artworks will be mostly made at the Oia Beach Resort Jeddah and then taken to the waterfront for some finishing touches before being displayed. The second phase of the project will include all cities in the Kingdom, then expanding to the world, where these artworks will be exported to communicate Saudi art to the world, and to communicate « new colors of Saudi Arabia » to the modern society. 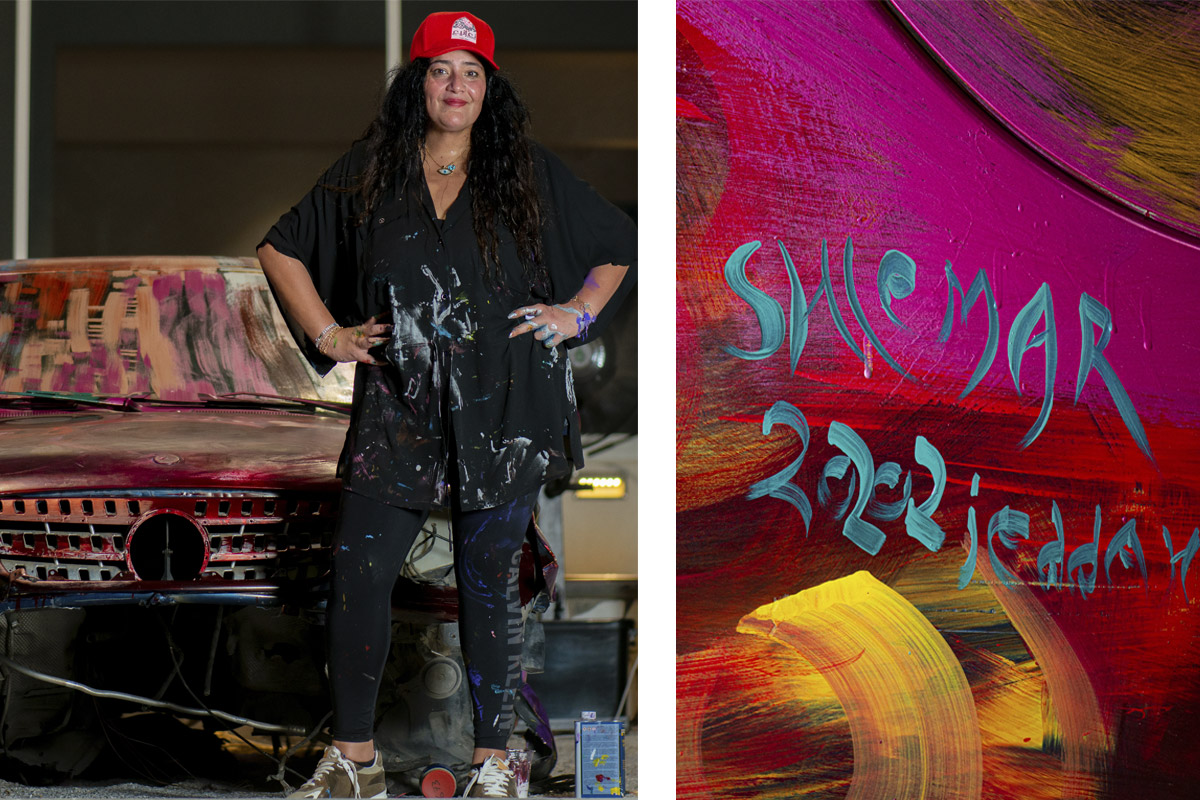