In GENESIS, my camera allowed nature to speak to me. And it was my privilege to listen.

In 1970, a 26-year-old  Brazilian Sebastião Salgado took hold of a camera for the first time, and looking through the viewfinder, suddenly life made sense to him. From that day onward, the camera became his tool for interacting with the world. Salgado shot very little color in his early career,  and “always preferred the chiaroscuro palette of black-and-white images.”

GENESIS , his life mission, results from  an epic eight-year expedition to rediscover the mountains, deserts and oceans, the animals and peoples that have so far escaped the imprint of modern society. The animal species and volcanoes of the Galápagos; penguins, sea lions, cormorants, and whales of the Antarctic and South Atlantic; Brazilian alligators and jaguars; African lions, leopards, and elephants; the isolated Zo’é tribe deep in the Amazon jungle; the Stone Age Korowai people of West Papua; nomadic Dinka cattle farmers in Sudan; Nenet nomads and their reindeer herds in the Arctic Circle; Mentawai jungle communities on islands west of Sumatra; the icebergs of the Antarctic; the volcanoes of Central Africa and the Kamchatka Peninsula; Saharan deserts; the Negro and Juruá rivers in the Amazon; the ravines of the Grand Canyon; the glaciers of Alaska… and beyond. 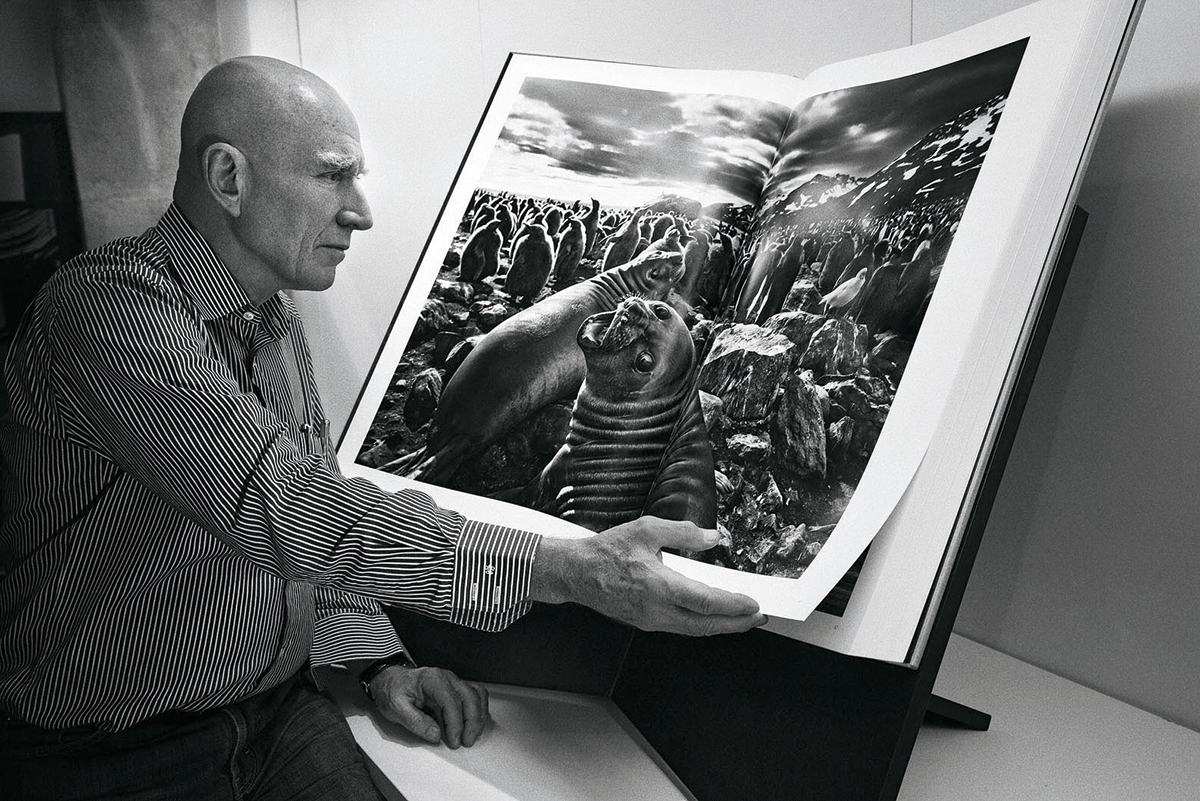 One can speak of the many voyages to over 32  countries, practically 8 months per year during almost a decade, the poetic photographer even walking where there were no roads to places that we would not even imagine, but this you will get from the book. This is a book that should have taken TASCHEN as much time to realize as did the photographer with his epic journey. What we have here are images that seem as big as the life they depict, where the viewer becomes an integral part of the panorama, spread out in humongous majesty! What is shown in the book is what must be preserved and you understand that Salgado and TASCHEN are contributing to the awareness about the world we live in, and questioning how we live in it without giving something back.

The pages stripped of color send us reeling back to ‘In the beginning …’ and we fall down in awesome surrender to the nakedness of what we really see, what we really are. Much ink could flow with words trying to describe the emotions, sentiments that are solicited by the large double-paged photos, overwhelmingly inspiring, but, on the contrary, you are spellbound and speechless before the symphony of images that provide a melodic respite from the clamor of the world outside those pages. GENESIS is a photographic concerto from two men who took the risk of bringing immortality to a morally wounded planet.

In our very humble opinion, GENESIS leaves no one indifferent, even though the industrialized world has shown nothing but indifference to the place where we live, up to this point. This book is a cry, a warning that we should stop, look, listen and …think about what should be done about it!

TASCHEN publishes books that last for a life time, and this one supersedes the axiom. GENESIS comes in various formats, as usual larger than life, conceived, edited and designed by Lélia Wanick Salgado. A numbered and signed limited Collector Edition (3.000 euros, 2 500 copies); and a numbered and signed limited Art Edition with a gelatin silver print (8.500 euros, 500 copies). Weighing in at 60 kg, this Sumo-sized (46,8 x 70,0 cm, 704 pages) offers a selection of five different photographs… Of course, there is an edition for the mass public at 49,99 euros.

All luxury copies come with a wooden pulpit designed especially for this book by Japanese architect Tadao Ando, (the only contemporary professional to receive the four most prestigious architectural awards); a smooth innovative creation consisting of twin pieces of wood joined together by a piece of leather, which can be stuck in a third wood element to form an elegant and sturdy bookstand.

Salgado’s voyage turned into a film, made by Wim Wenders and the photographer’s son, Juliano Ribeiro Salgado and after receiving a Certain Regard at Cannes in 2014, the film “Salt of the Earth” depicting the of life the photographer received the César Award for Best Documentary , and was also nominated in the Best Documentary category for an Oscar at the 2015 Academy Awards ceremony in Los Angeles.

It is extremely hard to dispose of a TASCHEN book (just the size of this one proves that), and both Salgado and TASCHEN prove that life, itself, is even more larger than any book. Let’s live it in the naked truth that GENESIS invites us to! 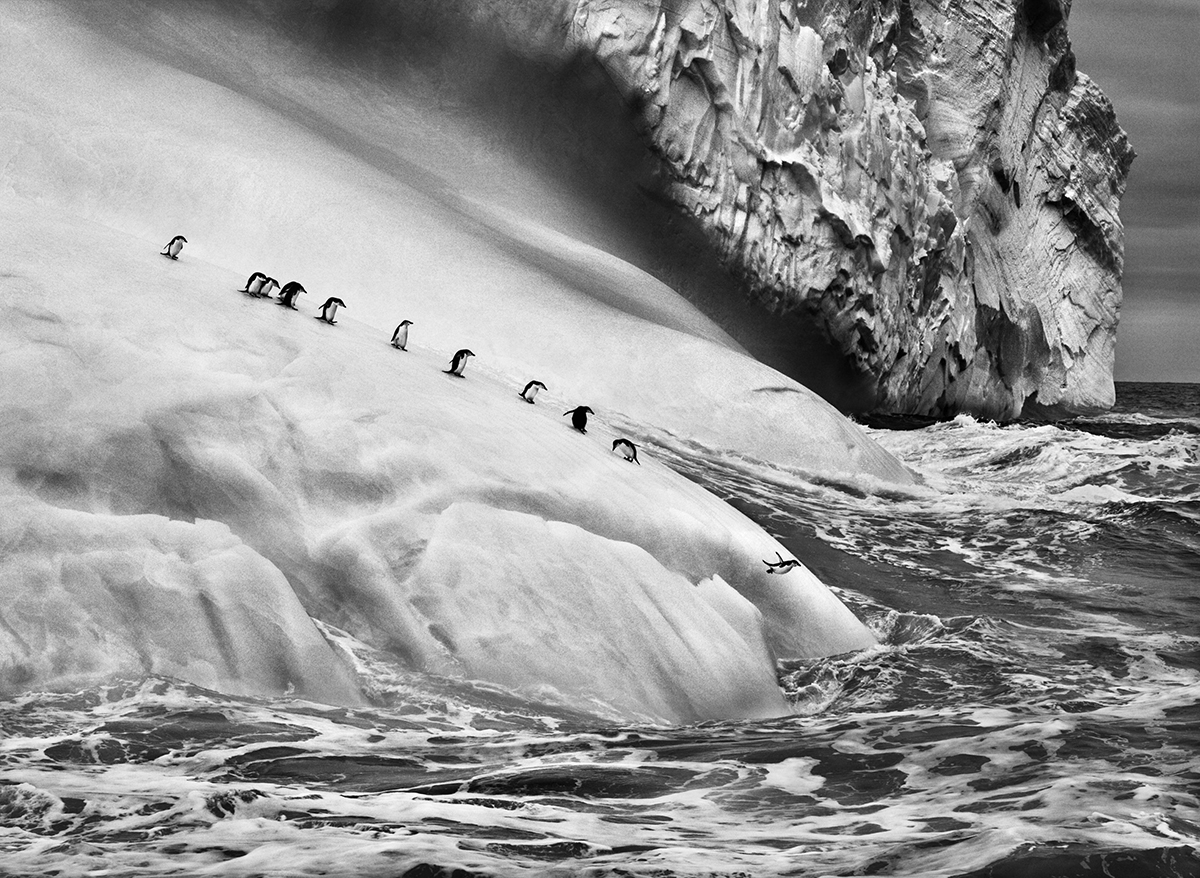