Born on April 21 1926 in Mayfair, London and crowned, by the Grace of God, Elizabeth II Queen of the United Kingdom of Great Britain and Northern Ireland and of her other realms and territories, Head of the Commonwealth and Defender of the Faith on 6 February 1952, the reign of our Queen has witnessed the greatest period of change in the history of the United Kingdom.

On Wednesday 9 September 2015, Elizabeth II became the United Kingdom’s longest reigning monarch, surpassing Victoria’s record of 63 years and 217 days. But rather than the country growing bombastic, in Victoria-style empire fashion, it has become more anxious and seen its power and influence drop. The monarchy has been forced to change too; and the future of both is much less easy to predict than it seemed when the Queen came to the throne.

Things were very different back in the early ‘fifties. The post-war years were a sort of phoenix time and the feeling was that nothing could stop everything just getting better and better, and the coronation was, in a certain way, its defining moment. My own parents were among the millions who bought or rented a new-fangled television set so they could witness this historic event. At the time, fewer than two million homes had television, mostly concentrated in the big cities. However, in the build-up to the big day, 526,000 television sets were sold as coronation fever swept the country. The enthusiasm for the new Queen was tangible.

But those millions of living-room television parties nearly didn’t happen at all.

Televising the coronation had been vetoed by both the Palace and Winston Churchill – but they were forced to bow both to Elizabeth’s insistence, and obviously to public opinion. TV ownership doubled and more than 27 million Britons crowded into their neighbours’ living rooms to watch the show.

It was the day the Queen truly entered the hearts of her subjects, to become the symbol, the icon of the new family through the boom times of the ‘sixties. 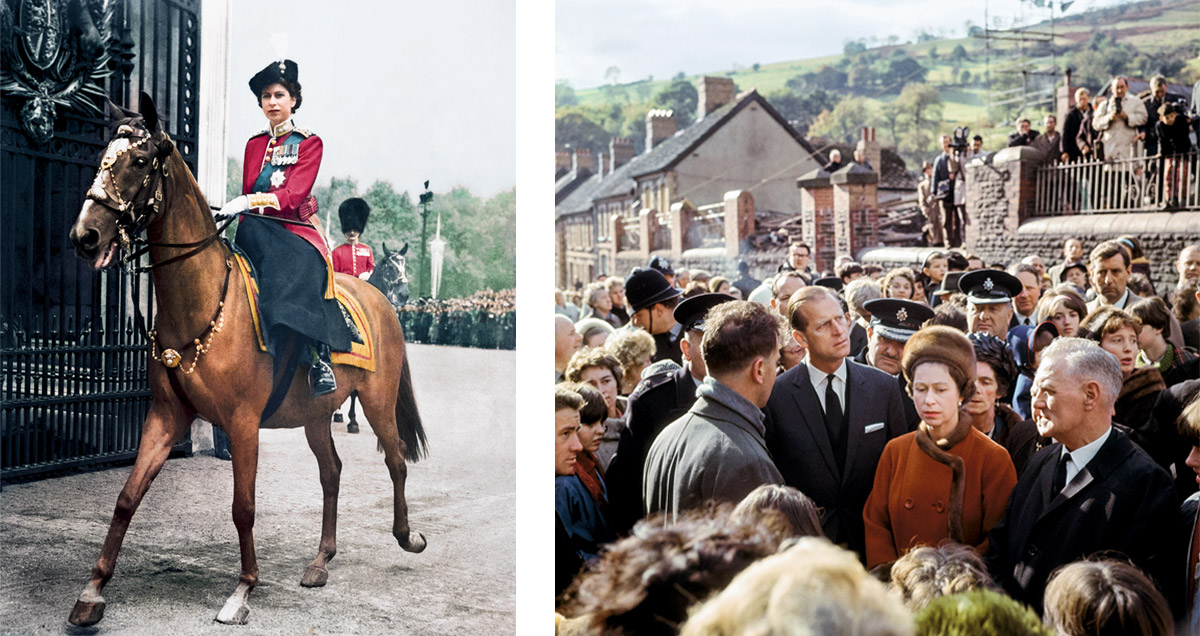 It seems almost quaint now that the 1969 BBC documentary, The Royal Family, was seen as excessively invasive, undermining the magic of monarchy with shots of the royal family at the breakfast table.

But nothing would tear the veil of the royal image of perfection more than the events of the 1990s, when charting the breakdown of Charles and Diana’s marriage became a national obsession.

Marking the 40th anniversary of her accession, the Queen reflected, with masterly understatement, that 1992 was not a year she would look back on “with undiluted pleasure”. Her “annus horribilis” saw the Prince of Wales separate from Diana, his first wife, and her sensational portrayal in Andrew Morton’s biography – a de facto autobiography, it later transpired – as a betrayed, self-mutilating bulimic. The Princess Royal divorced. The Duke of York’s freshly estranged wife, Sarah, graced the tabloids topless and accompanied by an enthusiastic “financial adviser”. The popularity of the royal family, unsurprisingly, ebbed.

Capping all that, Windsor Castle almost burned down, precipitating an uncommon public tear to well in the regal eye.They were dark times indeed, as the royal family discovered it couldn’t uphold the old-fashioned values of family life any better than anyone else.

But it could set an example of care, concern, forgiveness and understanding, as Her Majesty set about doing in the decades that followed.

By revealing her vulnerability, her humanity, Her Majesty regained the love of her people and truly earned the iconic status she enjoys today.

Who would have thought in the annus horribilis in the 1990s, that 20 years later you would see Prince William walking down the aisle, effectively being given away by Prince Charles and his stepmother, the former Camilla Parker Bowles? If you had predicted that, you would have been thought crazy.

Having reigned through the terms of 12 American presidents and a total of 14 UK prime ministers, in these uncertain and troubled times it’s reassuring to know we still have our Queen.

Long may she rule over us!

In this definitive photographic collection of her public and private life, which includes the works of luminaries such as Cecil Beaton, Lord Snowdon, David Bailey and Patrick Lichfield, Taschen traces her marriage, motherhood and coronation, her encounters with with such icons of her age as the Beatles, Marilyn Munroe and JFK and her extensive travels, as well as the tenderness and humour of informal and family moments.